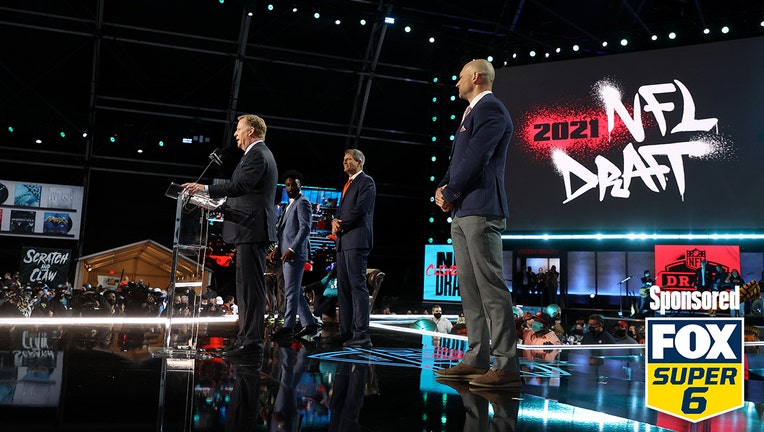 NFL Commissioner Roger Goodell speaks onstage with Jarvis Landry, Bernie Kosar and Joe Thomas prior to round one of the 2021 NFL Draft at the Great Lakes Science Center on April 29, 2021, in Cleveland, Ohio. (Photo by Gregory Shamus/Getty Images)

The first night of the NFL Draft had tons of intrigue, a lot of quarterbacks and domination of the board by Alabama players.

But the best part of the NFL's annual selection process is that championship teams are usually constructed Friday night and Saturday afternoon.

The second and third rounds take center stage in prime time tonight, and you can enjoy a fun night at home while testing your prognostication abilities with FOX Super 6 for your chance to win $5,000 – absolutely for free.

Just download the FOX Super 6 app on your phone or mobile device, enter the NFL Draft-A-Thon Challenge, answer six questions correctly, and you could hit the jackpot faster than a team finding a third-round gem of a future Pro Bowl starter. And yes, it really is free!

Here are the questions you need to answer for night two, along with a few thoughts to consider.

How many quarterbacks will be drafted in Round 2?

Normally, a sprint of five quarterbacks in the first round would mean there’s not a lot of quality left for the second day. That could be the case here, yet there are a handful of quarterbacks who could slip to a team in Round 2.

The biggest names to watch are Stanford’s Davis Mills, who projects as a possible late-second-round selection, and Florida’s Kyle Trask. Teams to watch for quarterback could include Carolina, Washington and Pittsburgh.

If you want to get the "hmmm" factor up, watch Seattle at the 56th pick if either quarterback is still on the board, given the Russell Wilson rumors.

Which college conference will have the first pick of Round 2?

The Jaguars are on the clock to start Day 2. Among the many needs of Urban Meyer’s team is safety, so Trevon Moehrig from TCU of the Big 12 could be a fit there. Remember that Meyer saw a lot of Big 12 games during his time working on Big Noon Kickoff, and Moehrig certainly made an impact.

Which player position will be the final pick of Round 3?

The options: QB, RB, WR, O-line, Defensive back, Other

If you believe Round 3 is the beginning of the "guts" of the draft – where the marquee names blend into the guys who actually win championships down the road – then the two lines are likely the place to look in this spot.

Offensive and defensive linemen have been taken with the last pick of the third round three of the past four years.

Which side of the ball will have more players drafted in Round 3?

The first round was offense-heavy, with 18 offensive players and 14 on defense being chosen. The second round could be the same, which might mean a run on defensive players in the third.

Which of these universities will have the most players drafted on Day 2?

Alabama had six players drafted in the first round Thursday, but the Tide still have plenty of prospects, including defensive tackle Christian Barmore and center Landon Dickerson, who figure to have their names called Friday night.

How many quarterbacks will appear in the Day 2 Draft-A-Thon stream?

The NFL Draft-A-Thon is a live-streaming broadcast on the NFL's digital platforms that's raising money for charity. Given that quarterbacks are the faces of the league, it seems like a pretty safe bet to count on at least three or four signal-callers stopping by, if not more, depending on how many you think will be picked Friday.