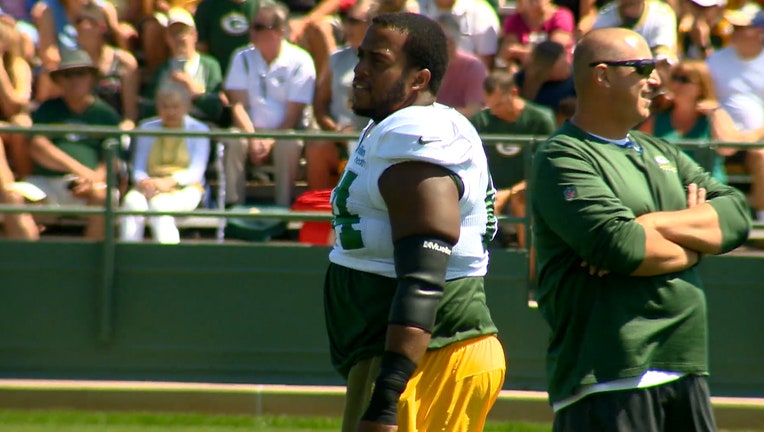 His mom is from Augusta, Ga., and he has family in the Atlanta metro area and Stone Mountain. He also knows some familiar faces in Flowery Branch from his previous stops, like LB Ahmad Thomas, DB Jamal Carter and new secondary/defensive pass game coordinator Joe Whitt Jr.

McCray was something of a journeyman through the football world before finding his footing with the Green Bay Packers in 2017.

He originally signed with the Titans out of UCF as an undrafted free agent in May 2014. He spent his rookie NFL season on the Titans’ practice squad and was cut in the 2015 preseason.

He then signed with the Orlando Predators in the Arena Football League, playing with his brother Jordan, also an offensive lineman who spent stints in the NFL. During that time, McCray also worked as a doorman at one of the Westgate Resorts, owned by Predators owner David Siegel, in Orlando.

In all, McCray had spent two seasons out of the NFL before the Packers brought him in as a street free agent in March 2017. In Green Bay, he finally broke through, making a NFL 53-man roster for the first time and making his first eight career starts that season after injuries decimated the Packers’ starting linemen. The Packers brought him back as a utility lineman in 2018, later trading him to the Browns. McCray saw time in 15 games in Cleveland, starting four of those contests.

"It's awesome just to get the opportunity to continue playing. I love playing," McCray told FOX 5 Sports. "Just how I got back into the NFL, just knowing that somebody actually wants me to be there, is excited for me to be there -- I'm just super excited to help this team."

The 27-year-old said he looks forward to embracing the opportunity to compete for the starting job at left guard with the Falcons and to show off his versatility when the team does finally get together for camp.

His first starts in Green Bay were at right tackle, but he is a natural guard and has started at the position in the NFL. With the departure of Wes Schweitzer to Washington, Atlanta currently has five guards on its roster in addition to McCray: Jamon Brown, James Carpenter, Sean Harlow, Chris Lindstrom and John Wetzel. (McCray was not listed on Atlanta's roster Friday night because his contract is not official yet.)

This offseason was McCray's first as an unrestricted free agent. It was also uncharted territory for the NFL, which shut all facilities and restricted travel as the world copes with the coronavirus pandemic.

"Obviously with everything that's going on in the world, it was different just because you can't really know what's going on," McCray said. "You're not really going anywhere, you're not taking any visits or anything like that... Just being able to listen to the offers and things like that, it was just a little bit different."

Staying at his parents' house in Miami, McCray said it's been difficult to maintain a fitness routine, with his gym shutting down. He and his brother Jordan, who was also a pro offensive lineman, went to three different public parks Monday before they found somewhere they could simply run outdoors. McCray said other than that, "it's pretty much just push-ups and sit-ups and whatever my dad has in the garage."

Given his entrance into the league as an undrafted free agent, McCray said he can't help but think: Without an invitation to this year's NFL Combine or pro days that have now been cancelled, how will an incoming class of undrafted free agents be noticed by scouts this offseason?

"I didn't get a chance to go to the Combine, and I've been hearing some guys aren't getting coaches and scouts to come to their pro days," McCray said. "And thinking about, I took a couple visits (with teams) coming out of colllege. The guys that don't have the Combine, not being able to do that, I just feel for them because it's hard getting into the league. It's even harder to stay in, but the first thing you need to do is get your foot in the door. And I feel for the guys who aren't getting the most out of that opportunity."