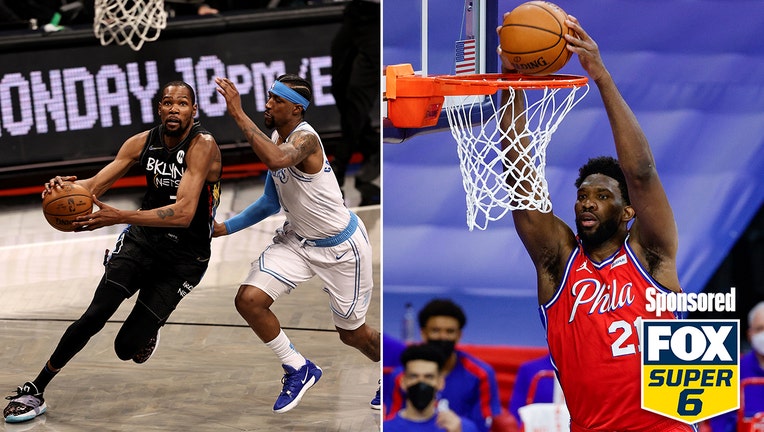 You want star power? The type that could light up the sky and make everyone drool at the possibility of a potential playoff matchup?

On Wednesday night, you’ve got it in Philadelphia, because the Brooklyn Nets and Philadelphia 76ers aren’t just loaded with elite talent – they are also playing with an edge that could become huge in a potential playoff matchup between the two.

And that’s why it is the premier game of a stacked Wednesday night lineup that could help you win big – absolutely for free. Just download the free FOX Super 6 app on your phone or tablet, pick the winner of all six games and the margin of victory correctly, and you could win $25,000.

Yes, it truly is free, and you truly can win, if you download and play now! To help put you in the best position possible, here are Wednesday night's six FOX Super 6 games and some quick thoughts on each.

With all due respect to the Milwaukee Bucks, these are the top two teams in the East meeting for the final time before a potential showdown in the NBA playoffs. Brooklyn and Philly split their first two meetings on the season, with the 76ers most recently taking a 124-108 win over the Nets, who were missing Kyrie Irving and Kevin Durant.

This time, Brooklyn will be without at least James Harden, who is still out with a hamstring strain. Irving was scheduled to miss Monday night’s game in Minnesota due to a personal issue before the game was postponed to Tuesday afternoon.

The 76ers got another MVP performance from Joel Embiid on Monday night, scoring 36 points in just 26 minutes during a 113-95 rout of Dallas that ended a stretch of 10 games out of 12 on the road for the 76ers. Philly could be in position for a big win at home.

This is the second game of a back-to-back for the Clippers, which had a Tuesday night game in Indiana.

L.A. won the first game between these two earlier in the week, a 131-124 defense optional game at Staples Center. Marcus Morris had 33 while Paul George chipped in 32 in the slugfest for the Clippers, who continue to stalk Utah and Phoenix for the top seed in the Western Conference.

Meanwhile, the Pistons went 2-3 on its five-game Western swing and returns home in last place overall in the Eastern Conference. The Clips should emerge victorious but don't be surprised if Detroit hangs tough.

Two teams struggling to lock into the top eight – or at least into the pre-playoff tournament – square off in the Crescent City. The Knicks actually hold the eighth seed in the East, have won three in a row and are just 1.5 games behind Miami, the fifth seed in the conference.

Julius Randle continues his impressive stretch, averaging 23 points and 11 rebounds as New York’s surge continues. Meanwhile, New Orleans has won three straight to edge back into the Western playoff picture. Zion Williamson is averaging 26.8 points per game and is shooting 62 percent from the floor – many of those coming at close range.

The bet here is that the Pelicans snap the Knicks' streak but that it takes all 48 minutes for New Orleans to secure a win.

The Magic are playing for next year and a better draft pick, losing six straight to fall 20 games below .500. Chicago’s holding the 10 seed in the East, 1.5 games ahead of Toronto for the last spot in the play-in round.

The highlight will be watching Zach LaVine, who is a viral moment waiting to happen just about every night he plays. Other than that, this one is anyone's guess.

Two nights after Stephen Curry set the Warriors' all-time franchise mark for scoring during a 53-point performance in Golden State’s 116-107 win over the Nuggets, Steve Kerr’s team hits the road for the start of a five-game road trip that includes stops in Boston and Philadelphia.

Golden State is in the West's 10th spot and would qualify for the play-in round as play began on Tuesday. Meanwhile, the Thunder’s rebuild continues as the youngest starting lineup in the league has dropped six straight, nine out of 10 and has the NBA’s worst point differential margin at -8.5 coming into play on Tuesday.

The Nuggets are reeling after a devastating piece of news on Tuesday, as Jamal Murray’s loss is a damaging blow for Denver’s hopes in the ultra-competitive Western Conference.

Jimmy Butler and the Heat, on the other hand, are in the middle of an Eastern Conference where the fourth through eighth place teams are separated by 1.5 games. The Heat are starting to get the gears rolling and have the label of "that team you don’t want to play" in the playoffs for the East’s top contenders.

Denver will play inspired on Murray's behalf, but his absence will be too much in the end.

Enter the NBA Challenge contest on the FOX Super 6 app for free, and you can win this week's $25,000 jackpot! Download now at foxsuper6.com!