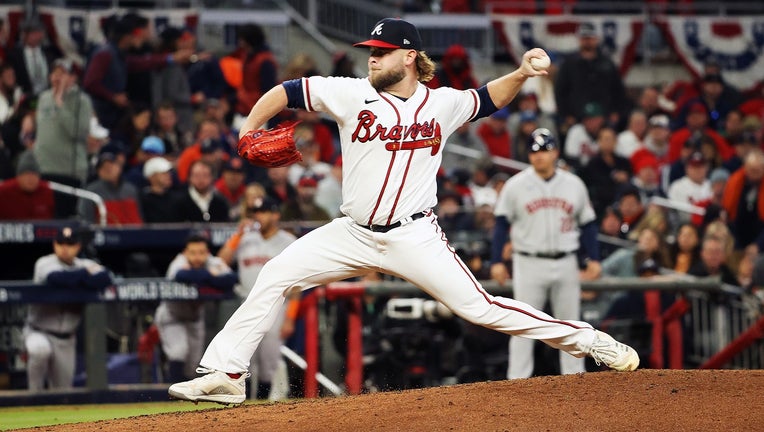 A.J. Minter #33 of the Atlanta Braves pitches in the fifth inning during Game 5 of the 2021 World Series between the Houston Astros and the Atlanta Braves at Truist Park on Sunday, October 31, 2021 in Atlanta, Georgia. (Photo by Mary DeCicco/MLB Phot

ATLANTA - If A.J. Minter could do it all over, he would’ve powered the ball to the catcher’s mitt instead of trying to aim it with Martín Maldonado at the plate and the bases loaded in the fifth inning.

Minter could tell the light-hitting Houston catcher was trying to work a walk.

"That’s obviously the one thing I would take back," Minter said. "And then a shot to, a flare shot, to score two runs, just like that."

Minter, the Braves’ stingy relief pitcher, coughed up three runs and blew a one-run lead in the Astros’ 9-5 victory over Atlanta in Game 5 early Monday. That "flare" was a bloop single by Marwin Gonzalez, the next batter, that plated two runs and broke a 5-all tie.

"I’m not worried about it," Minter said. "I’ve been pitching good and feeling good, and I’m still feeling good. I’ll be ready to go Game 6."

"Minter is a tough man," Astros manager Dusty Baker said. "He’s had our number pretty good this series. I’m just glad that Maldy got the walk and glad that Marwin, that was a big hit. That was a real big hit. You can’t let (Minter) get too far ahead of you because this guy has a lot of weapons to work with."

Minter took the loss after allowing three runs and three hits with two walks and two strikeouts in one inning.

The Atlanta Braves with one win away from taking the World Series, heads back to Houston for at least one more game against the Astro.

The Braves haven’t suffered consecutive losses in 24 games, a span that dates to Sept. 23-24 at Arizona and San Diego.

MAD DOG IN THE MOOD

Hall of Famer Greg Maddux threw out the ceremonial first pitch for Sunday night’s Game 5 of the World Series.

Maddux, wearing his Braves No. 31 jersey, tipped his cap in response to an ovation from fans as he walked onto the field. Fittingly, he threw the pitch to Eddie Perez, who was often his designated catcher.

After that, he had a little fun on Twitter.

" First #WorldSeries pitch since ’99…Little bit less pressure this time," Maddux wrote before tweeting directly to Perez that he appreciated him reaching out to catch the high first pitch. " @Eperez1212 thanks for catching it a lot of my catchers might have missed that. "

Perez, also a former Braves coach, now is a special adviser for player development for the team.

Maddux won four consecutive Cy Young Awards for the Chicago Cubs and the Braves, including in 1995 when he posted a remarkable 19-2 record with a 1.63 ERA for Atlanta’s 1995 World Series champion team.

It was a rare Atlanta appearance for "Mad Dog" Maddux. The 55-year-old Maddux is the pitching coach for UNLV.

Braves fans on Monday said they are hopeful they will bring the big win back to Atlanta. The team left for Houston for Game Six against the Astros.

Entering Game 5, Bregman had only one hit in 14 World Series at-bats (.071) with no homers and one RBI. He was hitting seventh. He was 0-for-5 with two strikeouts in Saturday’s night’s 3-2 loss while hitting third in Game 4. He went 1 for 4 with a double and an RBI in Game 5.

Baker said he hoped to move Bregman back up in a lineup with the designated hitter returning to Houston for Game 6.

NO LONGER PERFECT AT HOME

The Braves entered Game 5 trying to extend one of their most impressive home postseason performances in team history.

Overall, the Braves had won 12 of their last 13 home games before Game 5.

The Astros are 5-2 at home this postseason.

Left fielder Yordan Alvarez, who crashed into the wall trying to catch Jorge Soler’s go-ahead homer in the seventh inning of Game 4, was sore but able to start. The AL Championship Series MVP is hitting .063 after going 0 for 5 in Game 5.

Baker said he initially feared Alvarez hurt his shoulder reaching for the ball when he hit the fence.

"He banged his knee on the fence because he had paint or something that came off on his knee," Baker said.

Braves closer Will Smith, a native of Newnan, Georgia, said he cherishes memories of watching Atlanta games with his father. But the memories of the Braves’ 1995 World Series title are faint. Smith was only 6 and on vacation in Panama City, Florida, with his family when the Braves beat the Indians in the World Series.

"I just remember my dad being super excited when Marquis Grissom caught the last out," Smith said. "I knew they won, but I was still too young to remember much."