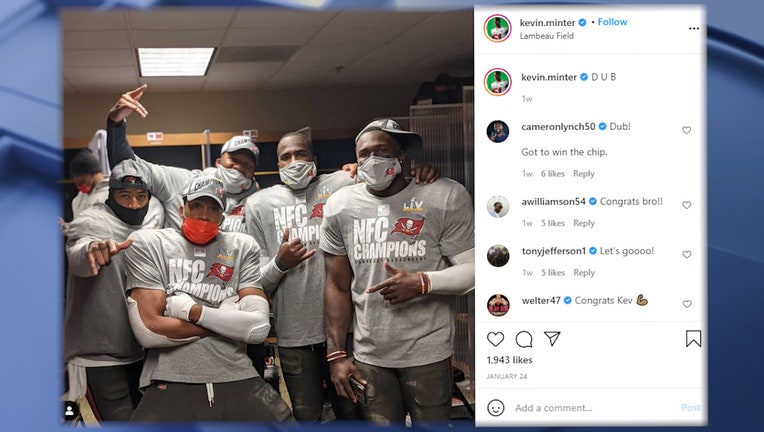 ATLANTA - Kevin Minter has been close before. At Peachtree Ridge High School, his team lost in the state finals. At LSU, his Tigers fell to Alabama in the BCS Championship Game. Now a linebacker and special teams captain with the Tampa Bay Buccaneers, Minter is planning to make the most of the opportunity. He knows they don't come around often.

Before this season, Minter's last playoff game came in 2016 with the Arizona Cardinals. After being eliminated, he remembers joking around in the postgame locker room with another young teammate. That's when a veteran player came up to them.

"He was like, 'y'all don't understand,'" said Minter of his former veteran teammate, who he declined to name. "You could see it, he was nearly tears in his eyes."

Five years later, Minter is on the verge of his first Super Bowl appearance, and sharing the same advice he got as a young player with his more junior teammates.

Those words to young teammates about making the most of their chance are important, but the most meaningful message of the week is one Minter plans to share with his family.

"It wouldn't right if all of us weren't together," said Minter.

Minter's mother Willie Mae Hollis says about 8 family members are traveling to Tampa for the Super Bowl. She has not seen Minter play in person this season because of COVID-19 precautions, after rarely missing any of his games in past years.

"Just so proud of him," said Hollis. "Couldn't be more proud than I am right now of my little one. He has worked hard for it, all I can say is we're proud of you."

Minter is also happy his older brother Murray Hollis, Jr. is coming to the game. Minter says Murray has "been [his] dad", got him into football and is his hero.

"He just worked so hard," said Murray Hollis, Jr. "I think he's so deserving of this moment, being where he is right now. He's just blessed."

Minter says he can't wait for kickoff of the big game, and to be able to hopefully celebrate in person with his family once it's over.

"Can't write a better story than this," said Minter.