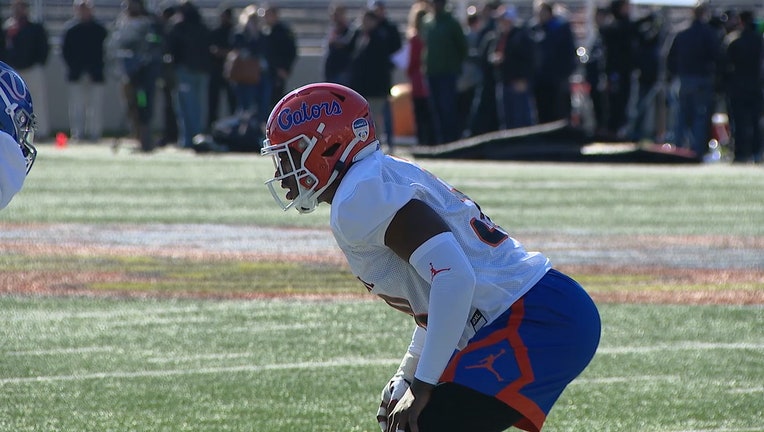 ATLANTA - The NFL Draft can mean lots of waiting, whether you're picked hours into the lengthy first round or a couple of days into the event. Former Hiram High School standout Jonathan Greenard didn't much mind the wait before he was picked in the third round by the Houston Texans. His mom, on the other hand, was getting nervous.

"When I didn't hear them call his name on that second go-round, I said, 'oh boy,'" said Jonathan's mother Carmen Greenard-Varnum.

Greenard-Varnum took a walk around the hotel where family was watching the Draft, spoke to some other mothers of NFL players on the phone, and talked to a few relatives.

"All of a sudden, some calmness came over me," said Greenard-Varnum. "Then Jonathan's phone rang. I said, 'thank you, Lord. Here it comes.' And they called my baby's name."

The Texans are getting an accomplished player: he was All-SEC first team last season playing defensive line for the Florida Gators. He arrived in Gainesville after playing in Louisville. It was a long road to get to that point: Greenard admits he was undersized coming out of Hiram, and he was not widely recruited. For his career at Florida and Louisville, he had 19 sacks, 122 tackles, three interceptions, and four forced fumbles.

At the family's NFL Draft watch party, video captured by family members showed Greenard calmly talking to Texans officials on the phone, then right after hanging up, exploding with emotion.

"Tears of joy," said Greenard. "All the things we've been through to get to this point. It's a true testament to what you can do, just put your mind to it."

Amid all the hugs, Greenard said the feeling that will stick with him most from that moment was getting to see his mom overcome with happiness.

"I felt really good because of all the things she's been through and sacrificed for me to get here," said Greenard. "It finally showed everything she's done in her life to get to this point, I did it just to repay her."

Greenard-Varnum says she didn't do it alone. Her ex-husband was very much a part of the lives of her three children. He passed away several years ago. Greenard-Varnum remarried, and her husband is very close with her kids. Still, when her children were younger, it wasn't always easy, and money was sometimes tight.

"There were days I went without," said Greenard-Varnum. "They didn't know about those days. There were days I cried. I had a big Suburban driving, but I had $10 in my pocket. But that $10 got me to Buckhead to drive to Northside Hospital to work, and I made it back home."

Greenard-Varnum tells a story about how, at a recent birthday party, Jonathan remembered how he noticed some of the sacrifices his mom made when he was younger. Greenard appreciates how hard his mother worked to make sure he and his siblings were well-taken care of.

"We never knew as kids what we were going through until we were older and realized what was going on," said Greenard. "At that time, she made it seem like we were living in high fashion. We had a smile on our faces."

Greenard-Varnum is looking forward to her first trip to Houston to see her son play and has little doubt he'll excel in the NFL.