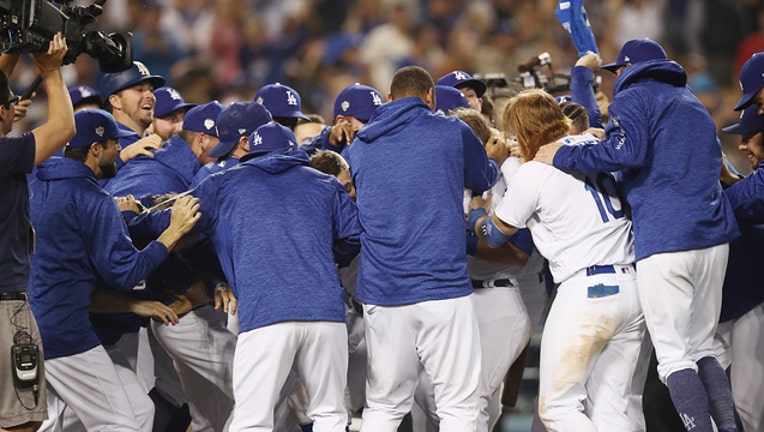 LOS ANGELES, CA - Max Muncy #13 of the Los Angeles Dodgers is congratulated by his teammates after his 18th inning walk-off home run to defeat the Red Sox 3-2 in Game Three of the 2018 World Series at Dodger Stadium. (Photo by Ezra Shaw/Getty Images)

LOS ANGELES, CA (CNS) - Max Muncy ended the longest World Series game ever with a leadoff home run in the bottom of the 18th inning and the Los Angeles Dodgers outlasted the Boston Red Sox 3-2 early Saturday to pull within 2-1.

Muncy connected off Nathan Eovaldi, who was in his seventh inning of relief. It took 7 hours, 20 minutes and 561 pitches to settle this one.

The Red Sox were oh-so-close in the 13th to taking a 3-0 lead in the best-of-seven Series. But second baseman Ian Kinsler's wide throw on a two-out grounder by Yasiel Puig let Los Angeles score the tying run.

Game 4 is Saturday, with Rich Hill scheduled to start for the Dodgers. Eovaldi had been set to pitch until he entered in the 12th and stayed in.