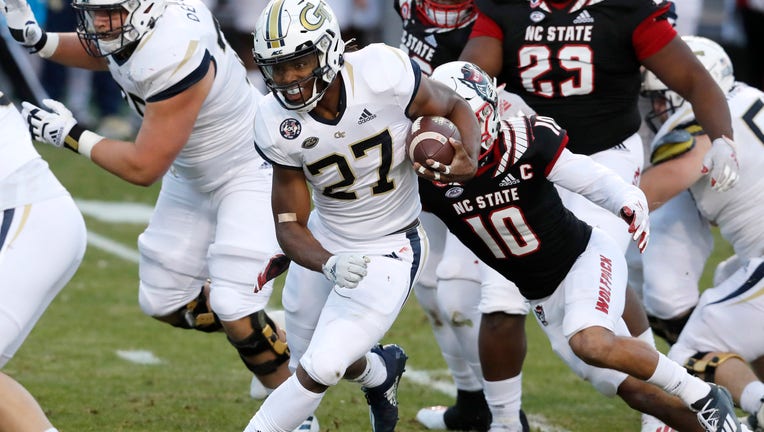 Georgia Tech running back Jordan Mason (27) runs through the N.C. State defense during the first half of N.C. State’s game against Georgia Tech at Carter-Finley Stadium in Raleigh, N.C., Saturday, Dec. 5, 2020.

RALEIGH - Bailey Hockman threw for 309 yards and Ricky Person and Zonovan Knight each ran for a touchdown as North Carolina State beat Georgia Tech 23-13 in its regular-season finale Saturday.

The win was the fourth straight for the Wolfpack (8-3, 7-3 Atlantic Coast Conference), marking the first time it has closed out the regular season with four straight wins since 2008. It also gave N.C. State seven ACC wins for the first time in school history, an impressive achievement after winning just one conference game in 2019.

"It's been a crazy year," N.C. State coach Dave Doeren said. "Just proud to be a part of this football team and these young men and this coaching staff. Looking at where we came from a year ago, we had one ACC win, now we have seven. That's quite a year when you talk about improvement."

Hockman started slow, completing only one of his first six passes. He gradually settled in, completing 10 of his next 11 for 143 yards while engineering four consecutive first-half scoring drives. He ultimately completed 23 of 36 passes to nine receivers en route to his second straight 300-yard passing game.

"That's a good team," Georgia Tech coach Geoff Collins said. "We went toe-to-toe with them the entire game, and I think if anybody watched our game against them last year, both of the football teams that played tonight are just much better than we were at this time last year."

Georgia Tech: The Yellow Jackets drove into N.C. State territory on five consecutive possessions between the second and fourth quarters. But after scoring its lone touchdown on the first of those drives, Georgia Tech settled for two field goals and turned the ball over on downs twice.

"When we go back and look at the season and the times that we could have and should have finished in the red zone," Collins said, "that will be a story of a lot of the things we will continue to work on throughout the offseason and the last couple of games of this year."

N.C. State: The Wolfpack's defense struggled at times throughout the season, but has started to round into form during its win streak. Georgia Tech managed to move the ball well Saturday, but N.C. State made the stops it needed - including a three-and-out and turnover on downs on the Yellow Jackets' last two possessions.

"The defense played out of their minds tonight, fourth-down stops, key plays at key moments and continuing to see other guys have to step in," Doeren said.

Among the 15 players honored during N.C. State's pregame senior day ceremony was Alim McNeill, who announced via Twitter on Saturday morning that he'll forgo his senior season and enter the NFL draft. The nation's highest-graded Power 5 defender entering Saturday according to Pro Football Focus, McNeil has posted 78 tackles, 17.5 tackles for loss and 10 sacks in his career.

"I really wasn't focused on that (the NFL draft) this season," McNeill said. "I wanted to let my play do the talking, and I guess I have so far. But it was a lot of talking and a lot of meeting with the coaches to come up with that decision."

With Antonneous Clayton opting out earlier this week and Chico Bennett, Jordan Domineck and Curtis Ryans all ruled out, Georgia Tech only had three defensive ends available Saturday. The attrition was also noticeable in the secondary, as the Yellow Jackets had only four players available to play the two safety spots and nickel.

Even then, Georgia Tech held N.C. State to just 88 rushing yards for the game and 135 total yards in the second half.

"The young guys stepped up at a lot of positions. ." Collins said. "The way the guys battled and stayed together is commendable, and it's something to build on as far as our culture goes."

Georgia Tech: The Yellow Jackets host Pittsburgh on Thursday night in a game that was initially scheduled for Nov. 14, but was moved because of coronavirus-related issues on both teams.