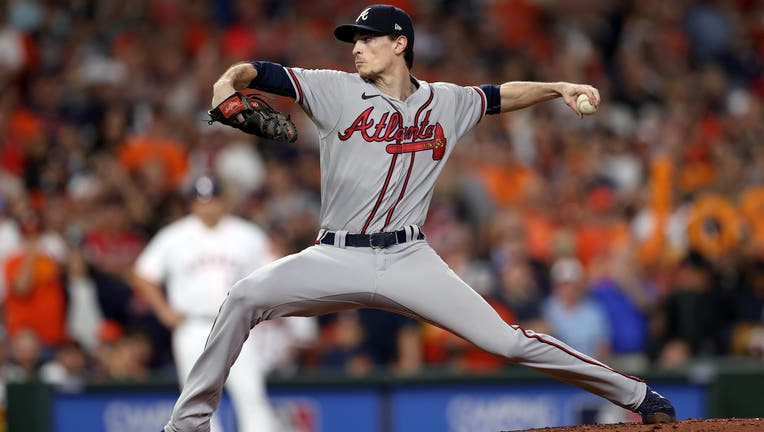 Max Fried #54 of the Atlanta Braves delivers the pitch against the Houston Astros during the first inning in Game Six of the World Series at Minute Maid Park on November 02, 2021 in Houston, Texas. (Photo by Elsa/Getty Images)

ATLANTA - Chicago White Sox pitcher Lucas Giolito and St. Louis pitcher Jack Flaherty were on hand to watch Max Fried, their teammate at Harvard-Westlake High School in California, start Game 6 of the World Series for the Atlanta Braves against Houston.

The two pitchers watched along with Harvard-Westlake's Matt LaCour, the baseball coach there from 2002-15 and now one of the school's athletic directors.

"It's quite an honor to be here," La Cour said.

All three were opening day starting pitchers this season.

Not only are fans gathering at The Battery, but Truist Park opened its gates for a watch party of Game Six of the World Series.

Houston Astros third baseman Alex Bregman said he hasn't worn his 2017 World Series championship ring since getting it, and hasn't even looked at it since then.

"I've been focused on the next one," Bregman said.

The championship ring Dusty Baker won as a player has been put away a whole lot longer than that.

Baker wasn't the Astros manager when they won their title four years ago, but he was a player for the Los Angeles Dodgers when they were champions in 1981.

While Baker said the ring no longer fits, he said he never wore it when it did.

"I'm not the kind of guy that flashes your jewelry and stuff, you know what I mean? Some people like to wear it. It was a lot more sedate then than the rings they're giving out now," Baker said. "If you wear it now, you have to talk to people that maybe you might not want to talk to."

A Braves fan who was at the 1995 World Series win for the Braves is hoping Game Six on Tuesday evening will be the magic number this time for the Braves.

Charlie Morton was able to rejoin his Braves teammates over the weekend for World Series games at home, but manager Brian Snitker said the Game 1 starter wasn't able to go with them back to Houston for the potential clincher.

Morton was still recovering from surgery on the broken right fibula he sustained in Game 1 a week earlier.

"He's not allowed to fly. I hate it for Charlie that he couldn't come, but he physically couldn't, wasn't able to come with us," Snitker said. "He's back in Atlanta."

Morton took a one-hop screamer off his leg starting the second inning in Game 1, a ball hit so hard it ricocheted to first baseman Freddie Freeman for an out. Morton then pitched another full inning before exiting the game after striking out Jose Altuve.

Snitker said it was good having Morton in the clubhouse in Atlanta.

"We were glad that he could be there and be around the guys," Snitker said. "I hate it for him that he couldn't join us here now."

Fans will get to be in the outfield at Truist Park for Game Six of the World Series for a watch party as Atlanta heads back to Houston's Minute Maid Park.

Houston Astros reliever Kendall Graveman very likely could have been the last pitcher to stand in the batter's box during a World Series game.

And stand he did, taking six pitches and a called third strike in the ninth inning of Houston's 9-5 win in Game 5.

"They told me don't swing. And by they, it was like 10 or 12 people," Graveman said Tuesday before Game 6, when the series was back in the American League park with the designated hitter back in play. "The competitor inside of me absolutely wanted to go up there and swing."

There's a good chance Major League Baseball will bring the DH to the National League next year -- likely forever.

Aside from two-way sensation Shohei Ohtani and the occasional pitcher being pitcher used as a pinch-hitter -- like Houston's Zack Greinke earlier in Game 5 -- that last game at Truist Park in Atlanta very likely could have been the final time a pitcher appears in a big league batting order.

Graveman entered Game 5 as a reliever in the middle of the eighth, and the No. 9 spot in the batting order came up in the top of the ninth before he went out and finished the game on the mound.

Snitker speaks ahead of Game Six of the World Series

Manager Brian Snitker talks about the challenges the Braves face ahead in Game Six of the World Series against the Astros.

The retractable roof at Minute Maid Park was open again for Game 6 of the World Series, like it was for Game 2 last Wednesday.

There were mostly clear skies with temperatures in the low 70s for the start of the game.

The roof was closed for Game 1.

Cooler temperatures and rain were forecast for Houston, starting Wednesday.

A Marietta pastor and life-long Braves fan said he is pumped for Braves to be in Game Six of the World Series.

Game 6 marked only the second time in 12 seasons that a World Series game was played after Nov. 1.

Since the 2009 World Series ended with the New York Yankees clinching on Nov. 4 in Game 6, the only other World Series game that had been played that late was was Game 7 of the 2016 World Series when the Chicago Cubs beat Cleveland on Nov. 2.