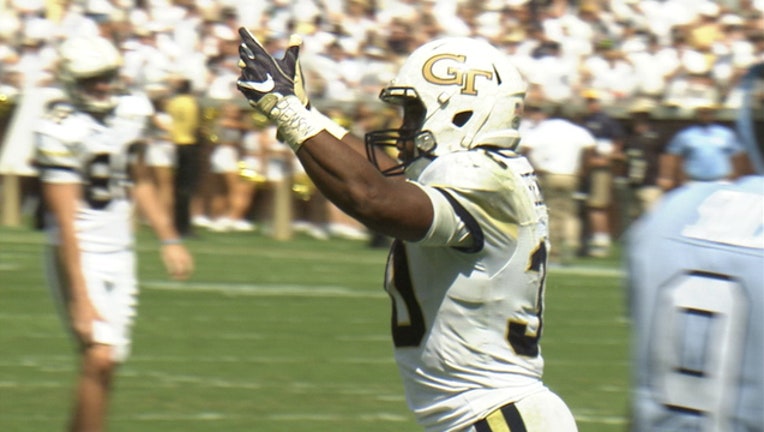 "If you hold the ball for 38 minutes, you should win," Johnson said.

Georgia Tech played keep-away against North Carolina, dominating the clock with its ball-control offense, and KirVonte Benson scored on a 63-yard run as the Yellow Jackets beat the Tar Heels 33-7 on Saturday.

"It was a step up from last week," Marshall said, referring to his play in last week's 35-17 win over Pittsburgh. "It's still not where I want to be."

Georgia Tech held the ball almost twice as long as the Tar Heels. The Yellow Jackets pulled away after leading only 10-0 at halftime.

"I think we just executed better in the second half," Marshall said. "We just got in a groove."

North Carolina avoided being shut out when Jordon Brown scored on an 8-yard run with 5:05 remaining. The touchdown was set up by Chazz Surratt's 34-yard pass to Jordan Cunningham.

It was a dramatic departure from recent shootouts in the series. North Carolina averaged 44.7 points in winning the last three games against Georgia Tech.

The Yellow Jackets held the ball for 18 plays and 8 minutes, 54 seconds on a 90-yard touchdown drive capped by Marshall's 5-yard run in the first quarter.

It was Georgia Tech's longest touchdown drive since 2012. The Yellow Jackets then added a 17-play, 74-yard drive in the second quarter that ended with a 21-yard field goal by Shawn Davis.

"The defense played 44 snaps in the first half, so there was no doubt that they were going to end up wearing down," said North Carolina coach Larry Fedora.

Georgia Tech, which lost four fumbles in the win over Pittsburgh, had two more lost fumbles by Marshall and Benson. One play after Marshall's fumble , A.J. Gray had the first of his two interceptions to give possession back to the Yellow Jackets. Benson then broke free for his 63-yard touchdown run.

"The turnover was a big play for us," Fedora said. "... Then we don't capitalize on offense."

Benson fumbled at the goal line late in the third quarter.

North Carolina: The Tar Heels offense, so high-powered in wins over Georgia Tech the last three years, showed the effects of the latest string of season-ending injuries. In addition to Proehl, defensive tackle Tyler Powell, tight end Carl Tucker and receiver Rontavius Groves were declared out for the season this week.

"We're going to put 11 guys out there and those 11 guys are expected to do their job," Fedora said. "... That's all there is to it. They can't worry about continuity because there is none."

Georgia Tech: The productive spread-option attack grabs the headlines, but the Yellow Jackets are also winning with defense this season. Gray's two interceptions led the way for a unit which could be the difference in Georgia Tech's hopes in the ACC Coastal Division.

North Carolina's Freeman Jones was wide left on a 40-yard field goal in the second quarter and again was left on a 52-yard attempt to end the half. Entering the game, Jones had made three of four field goal attempts, but none longer than 39 yards. He has missed each of his three attempts this season from 40 yards or longer.

It marked the first time in Johnson's 10 seasons the Yellow Jackets had two scoring drives of at least 17 plays in a game.

North Carolina: The Tar Heels on Saturday will make their first visit to No. 22 Notre Dame since taking a 29-24 win in 2008.

Georgia Tech: The Yellow Jackets will be off on Saturday before playing at No. 14 Miami on Oct. 14.