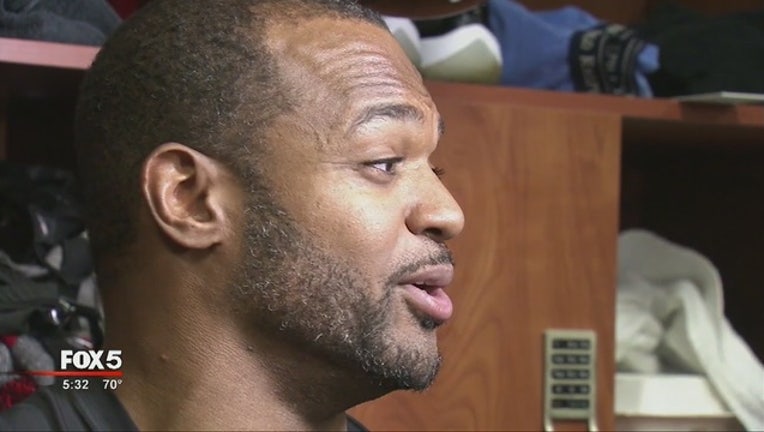 HOUSTON (AP) - Dwight Freeney is coming up on that time of year when he has to answer some hard questions.

How does his body feel?

Can he still be effective at what he does?

Is the motivation to succeed as strong as ever?

Once he completes that little self-evaluation, he can decide whether it's time to call it a career.

If this is where it ends, what a way to go out.

Less than three weeks away from his 37th birthday, Freeney is back in the Super Bowl for the third time, essentially filling the role of player-coach for the Atlanta Falcons .

He's one victory away from being able to fulfill the dream of every great athlete: retiring on top.

"I can appreciate the moment a lot more," Freeney said. "I'm at a different place in my career than I was before, and that's OK. You play long enough, you're gonna have all the ranges of what happened in your career: you didn't know much, you're on top of your game, and now you're like mentor guy."

The defensive end hasn't decided if this will be his final game. He's already on borrowed time.

"One of my goals coming in was, 'Hey, get 10 years in,'" Freeney said, smiling about a milestone he surpassed five seasons ago. "After my 10th year, every year I said, 'OK, that's probably it for me.' And I keep coming back, for whatever reason."

The Falcons are sure glad he did.

While Freeney no longer puts up the double-digit sack totals that were the hallmark of his 11-year tenure with the Indianapolis Colts, he has played an invaluable role tutoring an extremely young Falcons defense that started four rookies and four second-year players in the NFC championship game.

His impact was most apparent on Vic Beasley Jr., who rebounded from a disappointing rookie year to lead the NFL with 15 1-2 sacks. Freeney not only taught the youngster some of the tricks of the pass-rushing trade, but how to be a professional athlete.

"I can't even put that into words," Beasley said. "What Dwight does, he just prepares. You just get to see it for yourself. He prepares so well week in and week out. I just try to take everything I can from him."

Freeney relished the chance to take Beasley under his wing.

"Vic is a guy who has a lot of same characteristics I had when I was coming out," Freeney recalled. "I was fast, quick and agile. The thing is, when you're young you don't know much. You just run around and make plays because you're athletic. My thing with Vic was just trying to raise his IQ a little bit, his awareness of when you use certain moves and when you don't use certain moves. Hopefully, I rubbed off on him in a good way."

After establishing himself as one of the greatest pass rushers in NFL history with the Colts, a stint that included two Super Bowl appearances and one championship, Freeney looked like he was finished after two forgettable seasons in San Diego.

More than a month into the 2015 season, Freeney still didn't have a job and began to ponder what came next. A career in television, perhaps.

"I'm tired of training. I'm tired of being ready. No one's calling. I've got all these coaches saying, 'Oh, stay ready, stay ready,'" Freeney said. "But I'm like, 'Forget that. I'm done.'"

Then came a call from Arizona coach Bruce Arians, who wanted someone to bolster the Cardinals' pass rush .

Freeney fit the bill, getting eight sacks in 11 games as the team advanced to the NFC championship before losing to Carolina.

After another few months of uncertainty, the Falcons called.

Coach Dan Quinn not only wanted someone who might improve Atlanta's anemic pass rush, he was rebuilding the defense around a bunch of talented but inexperienced players .

Once again, Freeney was the perfect fit.

His contribution goes far beyond the field. He's really like having an extra coach on staff.

"Dwight is a very smart guy," Quinn said. "He has quarterback smarts playing defensive end. He has recall, he can remember this stat, this set, this down and distance, this field position, much like a quarterback can. So he's someone that's fun for me to challenge, too, because he usually has an opinion on certain topics or a certain stunt or certain blitz or certain call."

A second Super Bowl title might be enough to ensure Freeney takes his place in the Hall of Fame someday. The Patriots believe he's already earned his spot.