Freddie Freeman, struggling to fight back tears, says he 'loves the Braves with all my heart'

During an extremely emotional pre-game press conference, former Braves Freddie Freeman discussed how much his old team means to him and how it will feel to get his 2021 World Series ring at Truist Park on Friday. It was a hard interview to watch as the former Braves first baseman struggled to fight back tears talking about his old team and his fans.

ATLANTA - It was an emotional reunion as Freddie Freeman returned to Truist Park for the first time since putting on a Dodgers uniform.

Freeman was a few feet from the dais, ready to take questions during a pre-game press conference, when he became overwhelmed and walked out of the room. He emerged minutes later visibly overcome by tears and emotions to which every Braves fan can relate. The man, that once embodied what it was to be a member of the Atlanta team, told the members of the press he wasn’t sure he could get through it. 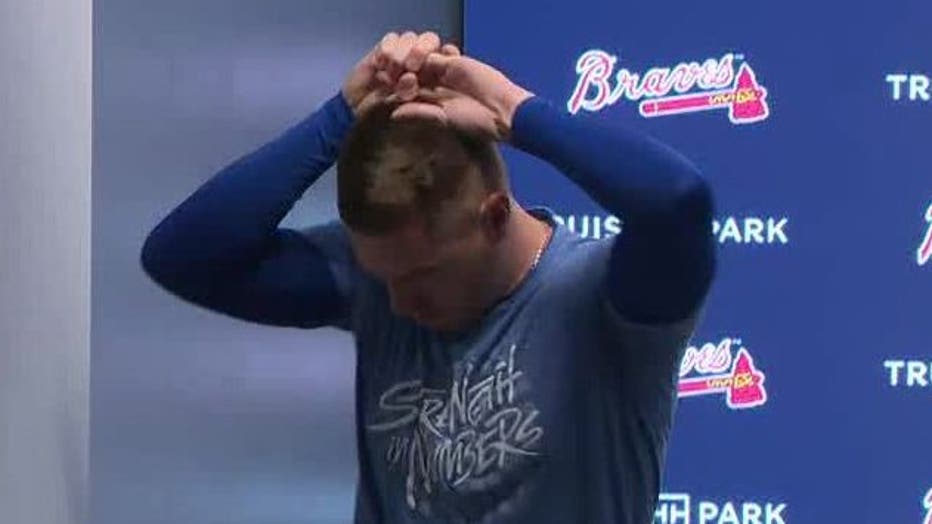 "I don’t even know how I’m gonna get through this weekend, to be honest," Freeman said.

Fighting back tears, Freeman left all his emotions out in the room like he left it all out on the field during the Braves' 2021 Championship season.

"I love the Braves organization with all my heart and that will never change," Freeman told reporters.

Freeman became a free agent following the Braves clinching the 2021 World Series Champions after he played for the team for a dozen years. His departure sparked shock and anger, especially after he signed a $162 million, six-year deal with the Dodgers.

"Regret... I'm not here to talk about [that]. If I got into that, we'd be here a long time. And emotion would change," the former Braves first baseman said, fighting back tears.

Freeman said he is not in Atlanta for closure because there’s nothing that needs to be closed.

Receiving his 2021 World Series championship ring, presented by Braves manager Brian Snitker in a pregame ceremony, produced more emotions from Freeman. Following a tribute video to Freeman, he made a slow walk to the field to join Snitker, who stood beside the World Series trophy in front of the mound.

Braves fans stood and cheered, some chanting "Freddie! Freddie!" Freeman answered by removing his cap and raising both arms to the fans. Freeman hugged Snitker twice, including once after putting on his ring. He grinned and gave the ring a kiss.

Minutes later, Freeman held up his batting helmet to the fans following another ovation before his first-inning at-bat. Braves right-hander Ian Anderson walked Freeman, who later scored on a sacrifice fly by Justin Turner for a 2-0 lead. Freeman struck out in the second inning.

Freeman hit a homer in his first reunion game, a 7-4 win over the Braves in Los Angeles on April 18.

Freeman, the 2020 NL MVP, led the Braves to their first World Series title since 1995 last season. He was widely expected to re-sign with Atlanta but instead signed a $162 million, six-year deal with the Dodgers after he was unable to reach an agreement with the Braves.

After 15 years in the Braves’ organization, including 12 years with Atlanta, the 32-year-old has enjoyed a productive first half with the Dodgers. He was hitting .303 with eight homers and 45 RBIs entering Friday and is third in the NL All-Star voting among first basemen.

Former Braves first baseman Freedie Freeman may be in a Dodgers uniform now, but he is expected to get a warm reception at Truist Park for his previous home crowd. Freeman will get his 2021 World Series Championship ring before Fridays game.

Atlanta’s Matt Olson, acquired from the Oakland Athletics two days after losing Freeman, is fourth in the voting.

Freeman constantly fought his emotions and didn’t make eye contact with Braves reporters through the opening minutes of his news conference.

"I can’t even look at you guys because I don’t know how I’m going to get through it," he said.

Even starting the news conference was difficult. When first entering the interview room, Freeman said "give me a second" and then turned and left the room for several minutes.

After returning, Freeman said, "Man, I love the Braves organization with all my heart. That will never change."

Dodgers manager Dave Roberts said he wasn’t surprised by Freeman’s declaration of his continued love for the Braves.

"I think it’s something that Freddie long awaited," Roberts said. "Everyone here adores him. I still know he’ll be ready to play a baseball game."

When he saw the large group of reporters before the game, Snitker joked, "is something going on?"

Snitker has had other ring ceremonies for returning players, including San Francisco’s Joc Pederson earlier this week.

"I’m happy just like I’m happy for all the guys we’ve given them to," Snitker said of Freeman.

This was not be the first time the Braves have played against Freeman since he left.

They played him in Los Angeles in April. At that time, Freeman said he still had nothing but love for his former team.

The Associate Press contributed to this report