METAIRIE, La. - Norcross product Alvin Kamara's next chance to build on his prolific, workhorse of a season comes against a Falcons defense that hopes it has an answer to the Saints' dynamic running back. 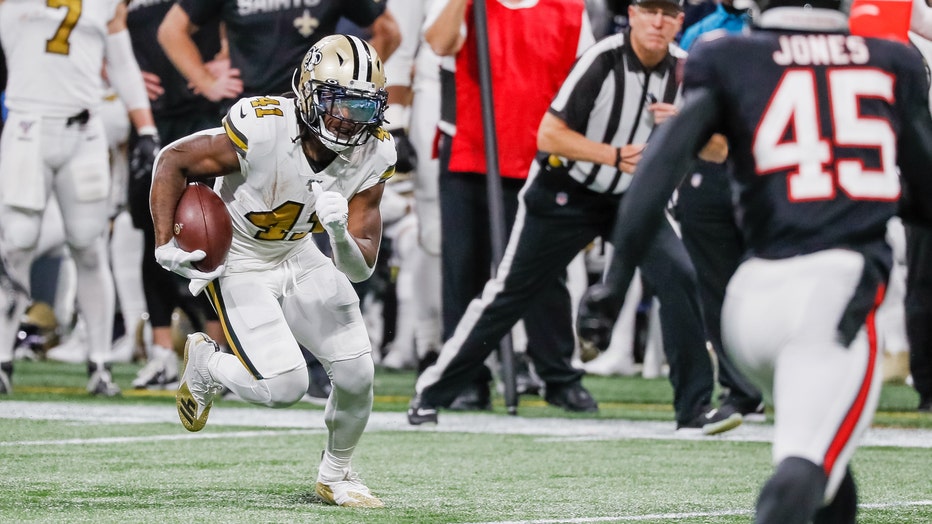 Atlanta's Deion "Debo" Jones -- who happens to be a New Orleans native and former LSU standout -- has been tough on the Saints in the past and is among the few linebackers who has the combination of strength and quickness to give Kamara a long day.

Or a short one, as in 2017, when Jones ended Kamara's game five minutes into the first quarter with a hard, high tackle that dropped the running back for a 4-yard loss on a screen pass. The Falcons won that game, 20-17, and Jones clinched the victory with a late interception of Drew Brees in the end zone.

Kamara, now in his fourth year as a pro, ranks second in the NFL in yards from scrimmage with 1,134, and touchdowns with 11 through nine games -- an average of 126 yards and more than one TD per game.

The Kamara-Jones matchup has occurred four times since Kamara entered the league in 2017, when he was the NFL Offensive Rookie of the Year. Jones missed both 2018 games against New Orleans because of injury.

Kamara has yet to reach 100 yards from scrimmage -- or score a touchdown -- against Atlanta when Jones has played.

"There's a handful of linebackers that'll draw that (one-on-one) matchup, and he's one of them," Saints coach Sean Payton said of Jones. "Just watching the games last year, I mean, five, six, seven different times, there's that one on one. ... I think that that's a credit to both players. Obviously, (Jones) can move and he's athletic, and so it is a matchup, especially on third down."

Kamara was scheduled to speak with reporters Wednesday, but that was postponed after he did not participate fully in practice. He was listed on the Saints' injury report as limited by a foot injury. Jones also did not meet with reporters.

Jones, who has intercepted Brees three times, also intercepted Winston and returned it for a touchdown against the Bucs at the end of last season.

For much of the past three seasons, the Saints' approach on offense has emphasizes limiting turnovers, generally opting against risky downfield throws and checking down to running backs. That has worked in large part because of Kamara's exceptional skill as a receiver out of the backfield, as well as his ability to set up blocks on screens, and slip tackles in general.

Fellow running back Latavius Murray, more of a bruising, straight-ahead runner, also has received opportunities in the short passing game since joining the Saints in 2019. He suspects the Saints' success in the running game and short passing game will hinge on their ability to beat Jones.

"He's a heck of a athlete, high-motor guy, runs the field well," Murray said. "It'll be a challenge obviously to try and eliminate him from making those big plays that he's consistently made."

But Murray sees Kamara as the type of running back who could win that matchup, noting that his star teammate has a "rare intelligence."

"When you ask a running back to play multiple positions, there's a risk of things going wrong. There's a risk of the running back not knowing what to do. But with Alvin, that's not the case," Murray explained. "Not only does he know what to do, where to line up when you have him out of the backfield, but then he also has the ability to catch the ball, and that just makes him that much more dangerous."

NOTES: Brees attended Wednesday's practice in his regular, red No. 9 jersey, but did not wear a helmet and stood off to the side while players went through drills. He was among five Saints who did not practice, along with DE Cameron Jordan (back), RB Dwayne Washington (back), WR Tre'Quan Smith (concussion) and TE Josh Hill (concussion).

STREAKS, STATS AND NOTES: QB Matt Ryan has passed for at least 300 yards in three of his last four games against the Saints. Ryan brings momentum into the game. He has completed 72.8 percent of his passes (107 of 147) the last four games for 1,274 yards, an average of 318.5 per game. ... Ryan has eight TD passes and two interceptions in the last four games. ... RB Todd Gurley has rushed for nine touchdowns in his first nine games with Atlanta. If he runs for a touchdown against the Saints, he would become the seventh player in NFL history with at least 10 rushing TDs in five of his first six seasons. ... LB Foye Oluokun won his first NFC Defensive Player of the Week honor after his 10 tackles, one sack and four quarterback hits against Denver on Nov. 8. ... WR Calvin Ridley leads the Falcons with six TD catches. Ridley has 23 TD receptions, passing Andre Rison's 22 for the most through an Atlanta player's first three seasons. ... If Ridley is held out with a mid-foot sprain, a player to watch is WR Olamide Zaccheaus. He had four catches for 103 yards, including a 51-yard TD catch, against Denver. It was his first 100-yard game. ... Zaccheaus' TD catch vs. Denver was the second of his career, following a 93-yarder against Carolina in 2019. Julio Jones is the only other Falcons player whose first two TD catches (50, 80) were for at least 50 yards. ... The Saints have won six straight. It's the fourth straight season they've had a winning streak at least that long. ... Saints QB Jameis Winston expected to make first start with Saints because of Drew Brees' rib injury. ... Winston started 70 games in his previous five seasons with Tampa Bay. ... RB Alvin Kamara had 98 scrimmage yards and three TDs last week. Kamara ranks second in the NFL in scrimmage yards with 1,134 and 11 TDs. ... Kamara has seven TDs (four receiving, three rushing) in five home games this season. ...WR Michael Thomas has 64 receptions for 777 yards (97.1 per game) and three TDs receiving in eight career games vs. Atlanta. Thomas needs two receptions to surpass Jarvis Landry (481) for most receptions in a player's first five seasons in NFL history. ... DE Cameron Jordan had a career-high four sacks in the last meeting and has 18 sacks in 18 games against the Falcons. ... LB Demario Davis had a season-high 12 tackles and his third sack of the season last week. ... S Malcolm Jenkins had his 19th career INT last week and has an INT in two straight games. Jenkins is one of three NFL DBs with at least two sacks and two INTs this season. ... DE Marcus Davenport had two sacks and two forced fumbles in the last meeting. ... The Saints' defense has allowed one TD in the past two games. ... Fantasy tip: Thomas, the 2019 NFL Offensive Player of the Year, is entering his third game back from a hamstring injury. He's due for a big game and the Falcons' secondary ranks near the bottom of the NFL in yards allowed.