In a press release sent to FOX 5, the team also announced both Quinn and Dimitroff will now report to Falcons President and CEO Rich McKay. The organization also named Assistant Head Coach Raheem Morris as Defensive Coordinator, effective after the 2019 season ends.

The organizational restructuring will give McKay a larger role in football operations. McKay previously served as Falcons GM from 2003-2008. 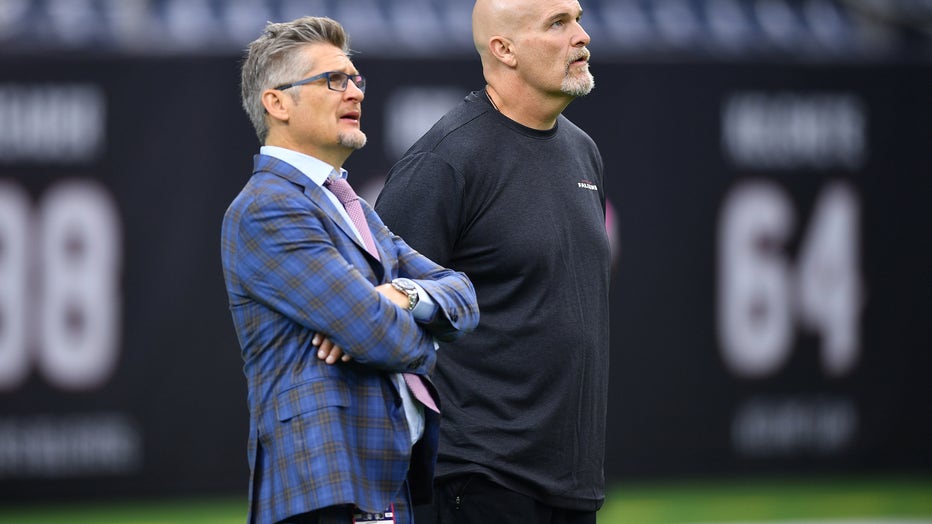 HOUSTON, TEXAS - OCTOBER 06: Thomas Dimitroff General Manager and Head coach Dan Quinn of the Atlanta Falcons speak on the field prior to the game against the at NRG Stadium on October 06, 2019. (Photo by Mark Brown/Getty Images)

Blank made the decision two days before the Falcons, who currently have a record of 6-9, end the season with a game at Tampa Bay this Sunday. The team started the season at 1-7, losing 6 straight games, but have gone 5-2 since.

The Falcons finished with a losing record for the first time under Quinn in 2018, going 7-9. The organization mostly attributed the disappointing 2018 season to a rash of injuries to starters and key contributors. Quinn fired all three of his coordinators at the end of the 2018 season, and tapped former Falcons offensive coordinator Dirk Koetter to return to Atlanta for the 2019 season. Quinn then named himself the defensive play caller going into 2019, before relinquishing those duties around halfway through the season. Falcons linebackers coach Jeff Ulbrich was named defensive coordinator with Raheem Morris contributing to the defensive play calling on certain downs and distances.

According to the release, Blank will continue to have oversight of football operations, and McKay reporting to the owner on all football-related matters.

The entire statement from the Falcons can be read below.