ATLANTA - Arthur Smith delivered a frank answer when asked about entering his first season as the Atlanta Falcons' coach without Julio Jones. 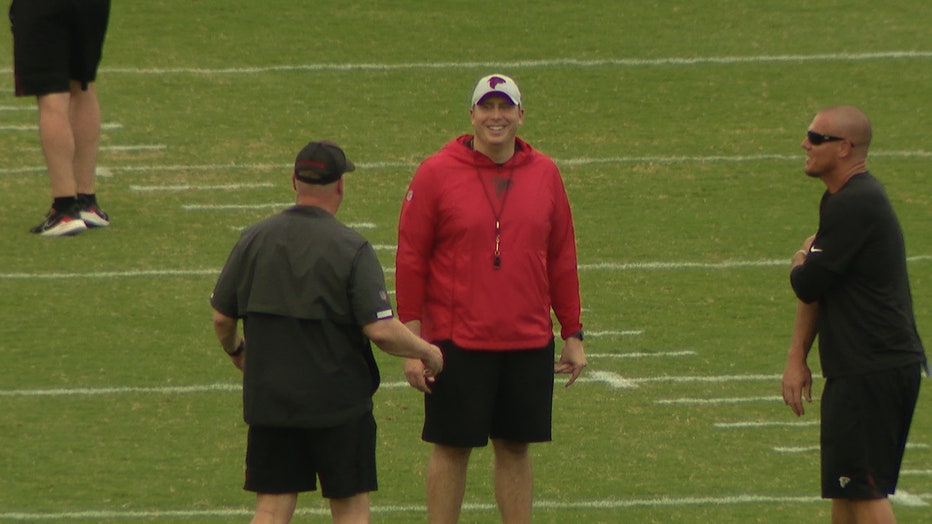 Jones was traded to Tennessee on Sunday in a move that allowed the financially strapped Falcons to clear the salary cap space needed to sign this year's draft picks.

Jones, 32, left as the Falcons' all-time leader in catches and receiving yards. He stood with quarterback Matt Ryan as the faces of the franchise for a decade. Like Ryan, he was a popular leader both on and off the field.

Smith, the former Titans offensive coordinator, recognized that a player with Jones' Hall of Fame credentials merits a sendoff with compliments.

Smith said he has "a lot of respect and appreciation for what he did here. I wish him well at Tennessee. My main concern is our roster and getting us ready to go for this fall."

Jones' trade to the Titans was not a surprise. Even so, the first practice without the seven-time Pro Bowl receiver felt different to his former teammates.

"I just have a ton of respect for Julio and all the amazing things he's accomplished in his career and for the team," right guard Chris Lindstrom said. "I'm just thankful for the interactions I had with Julio. He was a great teammate and a great role model in the locker room."

"We've got a great group of guys, so we all wish him the best," Means said. "We know now we've got to ramp it up, but it's not going to be a distraction. It's not going to be nothing that is going to hold us back in the sense of us dwelling on it. We're just going to push forward and wish him well and go out there and continue to play ball."

The Falcons kicked mandatory minicamp today, with No. 11 not on a roster there for the first time in over a decade. But what was more noticeable than what the Falcons did say today about Julio Jones’ departure was what they didn’t really say -- and how they're just moving right along. Kelly Price has more.

Jones' production had been impressive and consistent, with six straight seasons with more than 1,300 yards receiving, before last season. A nagging hamstring injury limited him to nine games in 2020, when Calvin Ridley emerged as the team's top receiver.

Tight end Kyle Pitts, the No. 4 overall selection in this year's NFL draft, could line up like a wide receiver in two-tight end sets with Hayden Hurst. Running back Cordarrelle Patterson, who began his career as a wide receiver, also could be used in different roles.

"We'll use any of these guys that are versatile out there," Smith said. "We feel like we've got a lot of versatile pieces, whether that's Hayden, whether that's Kyle, Cordarrelle. We have a lot of different guys and there will be great competition in every room."

NOTES: LB Deion Jones reported on Monday for his physical but was excused for Tuesday's first day of minicamp. Smith said the approved absence was for a family matter. ... Smith said Atlanta will have joint training camp practices with the Miami Dolphins before the teams' preseason game in Miami on Aug. 21. The Falcons' first preseason game is against Jones and the Titans on Aug. 12 in Atlanta.