KANSAS CITY, Mo. - Kansas City clinched the top seed in the AFC and the only playoff bye when Patrick Mahomes threw a 25-yard touchdown pass to Demarcus Robinson with just under two minutes for a 17-14 win over Atlanta on Sunday.

The Chiefs had to watch as Pro Bowl kicker Younghoe Koo missed a tying field-goal attempt with 9 seconds left to escape.

The Chiefs (14-1) won their NFL-record seventh straight one-possession game and matched a franchise record with their 10th straight win. They took any seeding drama out of games involving Pittsburgh and Buffalo and will have that coveted first-round AFC bye when the postseason begins in two weeks.

The Falcons (4-11) took the lead when Matt Ryan hit Laquon Treadwell for a 5-yard touchdown with 4:33 to go. But Mahomes kept finding Travis Kelce — who had a record-setting game of his own — to set up the TD pass to Robinson. And when the Falcons marched the other way in the closing seconds, Kansas City’s defense forced Koo’s 39-yard kick. 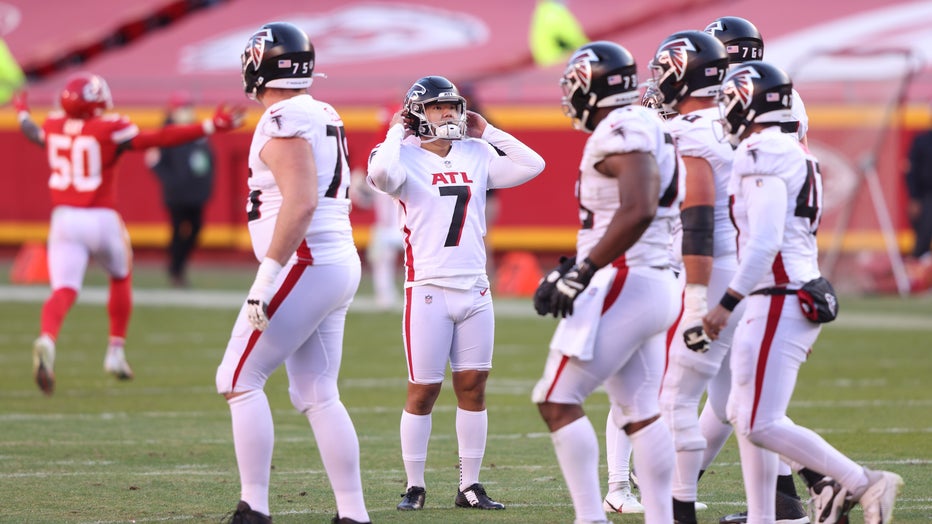 KANSAS CITY, MISSOURI - DECEMBER 27: Younghoe Koo #7 of the Atlanta Falcons watches as his field goal attempt in the final seconds of the game against the Kansas City Chiefs is no good at Arrowhead Stadium. (Photo by Jamie Squire/Getty Images)

Instead of heading to overtime, the Falcons headed home with their seventh loss by six points or less this season.

Mahomes finished with 278 yards passing and two touchdowns along with an interception. Kelce had seven catches for 98 yards and a score, giving him 1,426 yards for the season, breaking George Kittle’s record for an NFL tight end.

The Chiefs dominated field position in the first half yet only managed a draw on the scoreboard. The Falcons’ defense forced them to punt on their first two possessions, then Keanu Neal picked off a pass from Sammy Watkins when the Chiefs tried an audacious fourth-down play. Rather than plow ahead, as they had in converting a fourth down earlier on the drive, they had the wide receiver throw a reverse pass to Mahomes across the field.

Neal’s interception gave Atlanta the ball at its 2-yard line, and a 58-yard pass to Ridley took care of the poor starting position. Ryan ultimately found Hayden Hurst to cap the 98-yard drive for a 7-0 lead.

"Advertising: Enter the NFL Challenge contest on the FOX Super 6 app for free and you can win the $1M jackpot! Download now!"

The Chiefs’ offense finally got on track in the closing minutes. They never faced third down in going 78 yards in 12 plays for a tying score. Mahomes zipped a short TD pass to Kelce, who earlier became the first tight end in NFL history and first player in Chiefs history with multiple 100-catch seasons when he hauled in his second pass of the game.

The stunning display of defense continued for both teams in the second half.

Linebacker Foyesade Oluokun kept the game scoreless when he deftly stepped in front of Kelce at the goal line for an interception. The Chiefs answered by allowing 15 yards and forcing back-to-back punts in the third quarter.

The Falcons squandered their first chance to match the points when Brandon Powell coughed up the ball deep in Kansas City territory. But they made their second opportunity count on Ryan’s 5-yard flick to Treadwell that capped an eight-play, 75-yard touchdown drive.

Like so many times this season, the Falcons let it slip away.

Falcons: Visit the Buccaneers next Sunday to conclude their season.