ATHENS, Ga. (AP) - No. 4 Georgia is still on course to make a run at the College Football Playoff.

No thanks to the offense.

The No. 4 Bulldogs managed only one touchdown Saturday, but Rodrigo Blankenship booted four field goals and the defense stymied 24th-ranked Texas A&M for a lackluster 19-13 victory.

Georgia (10-1, 7-1 Southeastern Conference, No. 4 CFP) wrapped up the league schedule with its fifth straight victory, but it was a struggle all the way.

On a wet day between the hedges, the Bulldogs managed only 260 total yards and didn't really seal the victory until D'Andre Swift broke off an 11-yard run on third-and-1 with 2 1/2 minutes remaining. 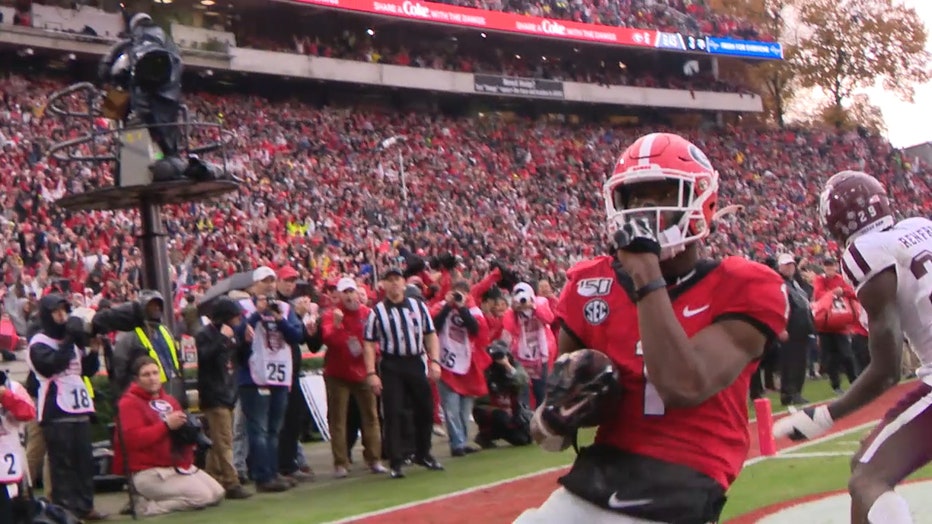 "No bones about it, we've got to improve," coach Kirby Smart said. "There were things tonight that we missed that were there. That's the frustrating part."

While the Bulldogs struggled offensively, the defense turned in another dominating performance until the closing minutes, when fatigue set in and the unit had to get by without top cornerback Eric Stokes, who left with an undisclosed injury.

His backup, freshman Tyrique Stevenson, knocked away a pass that forced the Aggies to punt with 4:21 remaining.

They never got it back.

"Those guys are relentless," said Georgia quarterback Jake Fromm, who had another tough game. "I'm really thankful they're on our team."

"The history of great kickers that Georgia's had," said Blankenship, who gained notoriety for his thick goggles but will be remembered for his uncanny accuracy. "Just to be among the ranks of those guys is really an honor."

Blankenship's performance was especially impressive in the sloppy conditions. His 49-yarder came when the rain was at its heaviest.

"It was straight down the middle," teammate Richard LeCounte marveled. "That's special." 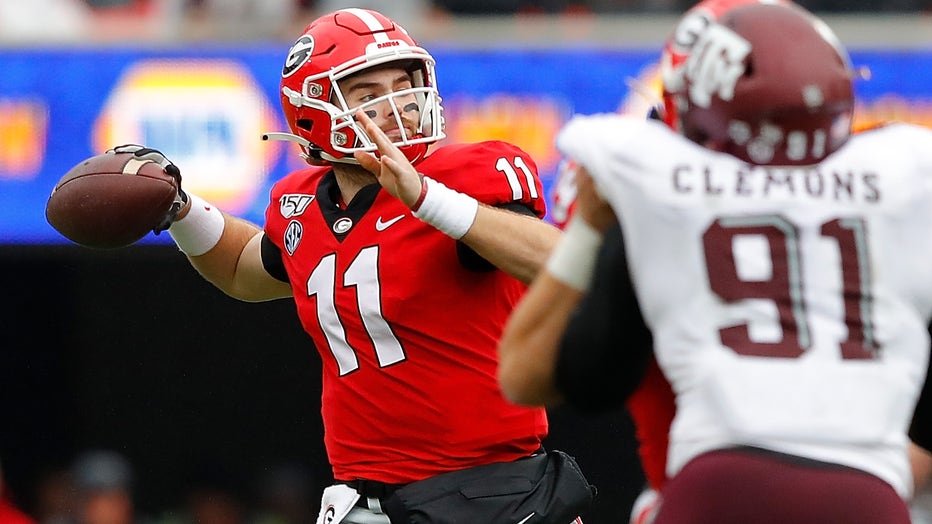 ATHENS, GEORGIA - NOVEMBER 23: Jake Fromm #11 of the Georgia Bulldogs looks to pass against the Texas A&M Aggies in the first half at Sanford Stadium (Photo by Kevin C. Cox/Getty Images)

Athens was hit by storms before the game, and another line rolled through in the second quarter, keeping famed mascot Uga X confined to his doghouse.

Then, suddenly, the showers cleared.

So did the cloud over the Georgia offense.

Just after sun broke through the clouds, bathing the towering north stands in light, freshman George Pickens slipped free down the right sideline and hauled in a 16-yard pass from Fromm, pushing the Bulldogs to a 13-3 lead at halftime.

It would be Georgia's only trip to the end zone.

The Bulldogs kept settling for field goals, and Texas A&M finally produced its lone TD of the game. Going 75 yards in 10 plays, the Aggies scored on Kellen Mond's 19-yard touchdown pass to Jhamon Ausbon with 11:16 remaining.

They got no closer.

"I think we showed a lot of guts," coach Jimbo Fisher said. "Unfortunately, there are no moral victories. We're not here for moral victories. We played a great football team very well, but we've got to find that last 2 inches at the top of the mountain."

Georgia's offensive frustration was epitomized when Fromm failed to audible out of a blitz in the closing minutes and Swift was thrown for a 2-yard loss.

The cameras caught Swift yelling at his quarterback, though everyone shrugged off the incident after the game.

"That's just two competitors who want to compete," Fromm said. Added Swift: "We're always cool. That's football. Nothing is ever going to come between us."

What someone asked Smart about the dust-up between two of his biggest stars, the coach said, "It wasn't a dust-up. That's love. That's passion. It was a situation where we were milking the clock, and A&M disguised a blitz and Jake didn't get out of it."

Texas A&M: The Aggies had another chance to prove they can compete with the nation's top teams. Again, they came up short. All four of their losses have been to teams that were ranked in the Top 10 at the time of the game.

Georgia: It's difficult to envision the Bulldogs reaching the four-team playoff with the way their offense is playing. Fromm's struggles are especially concerning. The junior quarterback was 11 of 23 for 163 yards, the third straight game he has failed to complete even 50 percent of his passes. But Swift had some very impressive runs, finishing with 103 yards on 19 carries. Overall, however, the Bulldogs were held to a season-low 97 yards rushing.

Texas A&M: Completes its season-ending gauntlet by traveling to Baton Rouge to take on No. 1 LSU -- the fifth Top 10 opponent the Aggies have faced this season.

Georgia: Makes the short trip to Atlanta for its "Clean, Old-Fashioned Hate" rivalry game against Georgia Tech (3-8) to end the regular season. The Bulldogs will be heavily favored to beat the Yellow Jackets for the third year in a row and 16th time in their last 19 meetings.