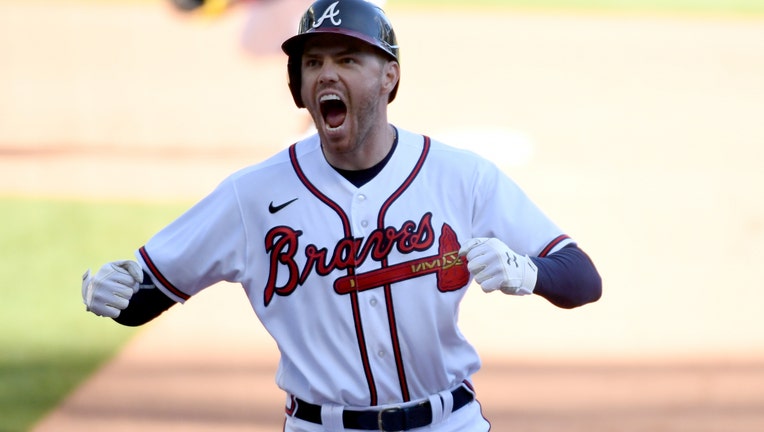 Freddie Freeman #5 of the Atlanta Braves celebrates after hitting a walk-off single to win Game 1 of the Wild Card Series between the Cincinnati Reds and the Atlanta Braves at Truist Park on Wednesday, September 30, 2020 in Atlanta, Georgia. The Brav

"I don't think anybody could ever dream of winning an MVP," he said Thursday night. "As a kid you're just dreaming to one day be on TV like the guys you're watching. For it to come like this, it's just amazing."

Freeman got 28 of the 30 first-place ballots in voting by members of the Baseball Writers’ Association of America. Dodgers outfielder Mookie Betts got the other two firsts to finish second. Marcell Ozuna finished sixth. Ronald Acuña, Max Fried and Dansby Swanson also earned votes.

Freeman said he could barely sleep Wednesday night and was nervous all day Thursday before the announcement around 7 p.m.

"Everything's just running through your head, all the emotions, everything you've done. I didn't want to get my hopes up too high, because you never know," he said. "As the show went on, my hands were sweating. I had my dad feel my hands, and it was all sweaty. I got a little nervous; I can't lie. But all the emotions, it's just absolutely incredible."

In a season affected from spring training to the World Series by the pandemic, perhaps it was fitting the final major award of the year went to someone infected by the virus.

Three weeks before the delayed opening day in late July, Freeman’s body temperature spiked at 104.5 degrees and he lost his sense of taste and smell. At one point, he recalled, he said a little prayer because “I wasn’t ready.”

The 31-year-old star bounced back in a big way, batting .341 with 13 home runs and 53 RBIs while playing all 60 games. A powerful lefty batter with the ability to spray the ball all over the field, he led the majors in hitting 23 doubles and scoring 51 runs.

Boosted by the four-time All-Star, the Braves won the NL East and came within one win of reaching the World Series for the first time since 1999.

Freeman is the sixth different player in Braves franchise history to be the NL MVP. Chipper Jones most recently took the honor in 1999.

Freeman, who is close friends with Jones, wears a tattered Braves T-shirt under his uniform that was passed down to him from Jones.

"It's amazing, to be able to play with Chipper, to learn from him, to have (Terry Pendleton) as a coach to really guide me and help me learn how to play the game the right way," Freeman said. "Dale Murphy has been around in spring training, and he's a big influence on all of us. So to be in the same class as them and Hank Aaron and all those kinds of guys, it's really hard to put into words right now. All the emotions are running crazy."

Freeman has battled back from surgery at the end of last season and COVID-19 in July to have one of his best seasons, leading the Braves to the NLCS for the first time in nearly 20 years.

Freeman had arthroscopic surgery at the end of the 2019 season to remove loose bodies and clean up some bone spurs. He missed some time in spring training because of swelling in the elbow. And then on top of it, he came down with the coronavirus earlier this year.

Betts was bidding to join Frank Robinson as the only players to win the MVP in both leagues. The 28-year-old outfielder earned the AL honor in 2018 while leading Boston to the World Series title.

Traded by the Red Sox to Los Angeles early this year, Betts hit .292 with 16 homers and 39 RBIs and was the catalyst in the Dodgers’ run to their first championship since 1988.

Chicago White Sox slugger José Abreu earned the AL MVP, a reward for powering his team back into the playoffs for the first time since 2008.

Abreu led the majors with 60 RBIs and 148 total bases, and topped the AL with 76 hits and a .617 slugging percentage. He played in all 60 games during the virus-shortened season as Chicago claimed a wild-card spot.

The 33-year-old Abreu batted .317 with 19 home runs, connecting six times in a three-game series against the Cubs in late August. That barrage of longballs at Wrigley Field was part of his 22-game hitting streak, the longest in the majors this year.

Abreu was the third Cuban-born player to be an MVP, along with Jose Canseco and Zoilo Versalles.

Smooth around the bag, Abreu ended an MVP drought for AL first basemen. None had won the award since Justin Morneau for Minnesota in 2006; Cincinnati first baseman Joey Votto won the NL MVP in 2010.

AL Cy Young Award winner Shane Bieber of Cleveland was fourth and Angels outfielder Mike Trout was fifth. A three-time AL MVP, Trout had finished in the top four every season since he was AL Rookie of the Year in 2012.

This will be the first time in more than 75 years the MVP trophies don’t carry the name and likeness of Kenesaw Mountain Landis, baseball’s first commissioner.

In an Associated Press story in late June, former MVPs Barry Larkin, Terry Pendleton and Mike Schmidt said they favored pulling Landis’ name off future plaques because of concerns over his handling of Black players.

BBWAA members overwhelmingly voted in October to remove any mention of Landis from the MVP trophy and the award won’t be named for anyone this year. The organization will discuss in 2021 whether to name it for someone else, with Frank Robinson -- the only player to win the MVP in both leagues -- and former Negro Leagues star Josh Gibson among those being mentioned as possibilities.

Landis became commissioner in 1920 and no Blacks played in the majors through his reign that ended when he died in 1944. Jackie Robinson broke baseball’s color barrier in 1947.

In 1931, Landis gave the BBWAA control of picking and presenting the MVPs. During the 1944 World Series, the group decided to add Landis’ name to the plaque. His name had appeared on all MVP plaques since then and was featured more prominently than the actual winners of the Kenesaw Mountain Landis Memorial Baseball Award.

The Associated Press contributed to this report. This story is developing.  Check back for more details.