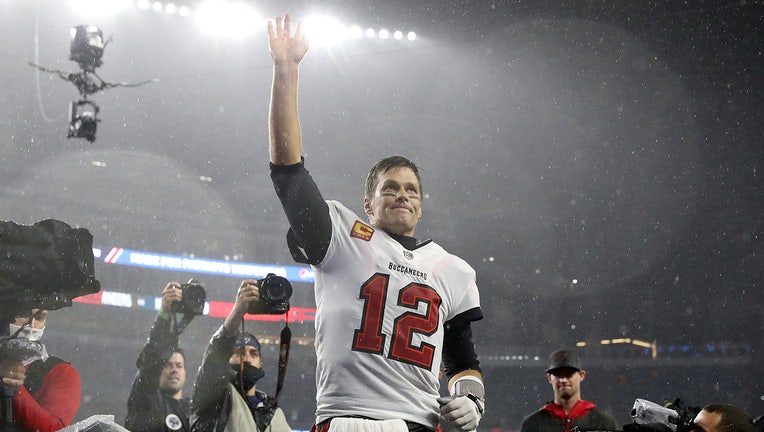 Tom Brady waves to the crowd as he runs off the field after defeating the New England Patriots in the game at Gillette Stadium on October 03, 2021 in Foxborough, Massachusetts. (Photo by Maddie Meyer/Getty Images)

FOXBOROUGH, Mass. - Playing as a visitor at Gillette Stadium wasn’t the only big change for Tom Brady on Sunday night.

The seven-time Super Bowl champion, six with the Patriots, struggled in the rainy conditions much of the evening. He was booed — often.

Being Brady, he also won.

Brady took Tampa Bay on a 45-yard drive aided by a 31-yard pass interference penalty, and Ryan Succop made a 48-yard field goal for a 19-17 victory. While most of the game was not a classic for the 44-year-old quarterback, the march to victory seemed fitting in a place Brady has won 135 of 158 games.

Brady threw for 269 yards, but the Bucs (3-1) scored only one touchdown, on an 8-yard run by Ronald Jones. With the game in the balance, he watched from an unfamiliar sideline as Nick Folk had a 56-yard field goal hit the left upright in the final minute for New England.

Brady then hugged dozens of his former teammates and coaches at midfield — a quick one with Bill Belichick — as the rain intensified and Gillette Stadium emptied in silence.

Despite soaring expectations and hype, this was no classic. There weren’t a lot of personal highlights for the returning hero. Indeed, when Brady was sacked by Matt Judon in the second quarter, the crowd went wild.

Even when the Buccaneers quarterback set the record for yards passing in a career on a 28-yard completion to Mike Evans in the first quarter, there was a mixture of cheers and applause along with the jeers. Brady, 44, reached 80,359 yards through the air and then called a timeout before the next play — though no announcement had been made about setting the mark. That came during the timeout. 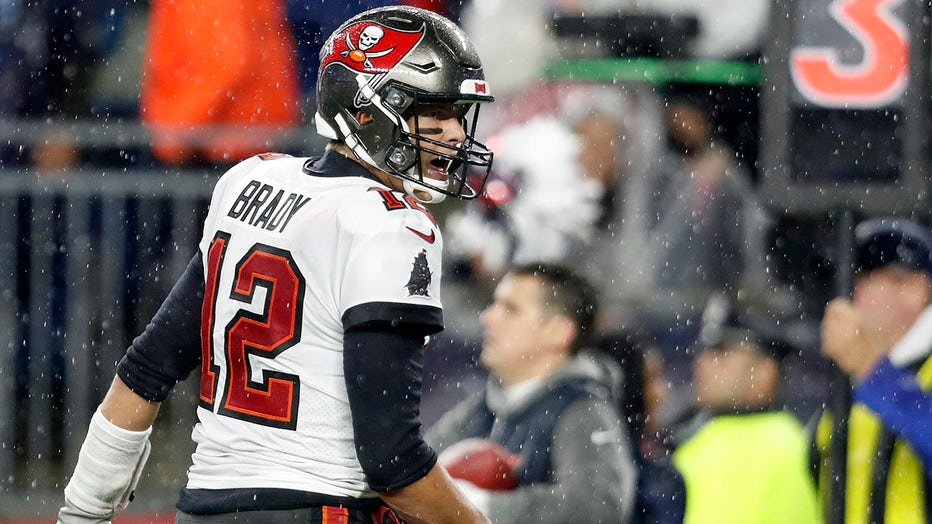 Tom Brady yells at the referees after a call Brady though was wrong in the third quarter. (Photo by Jim Davis/The Boston Globe via Getty Images)

Ryan Succop’s field goal a few plays later — after Brady misfired on a couple of throws — gave Tampa Bay a 3-0 lead. By halftime in a steady rain, Brady looked ordinary in the highly charged atmosphere, and defending champion Tampa Bay trailed 7-6. Brady was 15 for 27 for 182 yards, with a few pinpoint completions and just as many overthrows.

After a friendly greeting for the quarterback during pregame warmups, the fans were in no mood to offer him a welcome when the game began.

Brady completed two passes on the Buccaneers first drive before they stalled and punted. He stoically headed to the sideline — on the opposite side of the field from where he usually settled as a Patriot — with little reaction to the fans’ jeers. It was that way most of the game.

He took the Bucs into scoring range on their next possession, however, surpassing the passing record of Drew Brees, too. 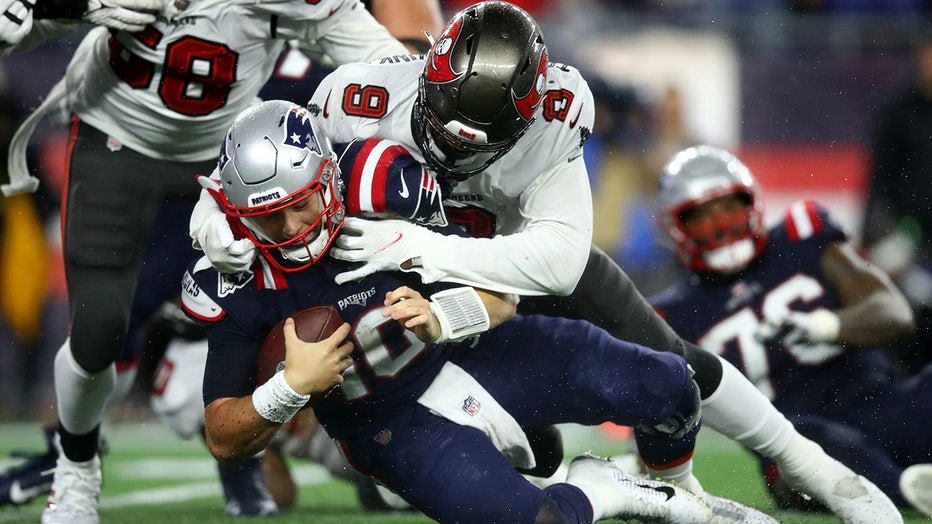 Mac Jones gets sacked by Joe Tryon-Shoyinka of the Tampa Bay Buccaneers during the third quarter in the game at Gillette Stadium on October 03, 2021 in Foxborough, Massachusetts. (Photo by Adam Glanzman/Getty Images)

During warmups, to chants of "BRADY, BRADY, BRADY in a half-filled Gillette Stadium, he knew exactly where he was, of course. He did his customary "Let’s Go," fist pump after jogging the entire sideline. The crowd responded with its cheer as Brady hugged New England offensive coordinator Josh McDaniels before heading to the other end of the field to warm up.

Belichick came out midway through pregame warmups but did not approach Brady.

Earlier, there was a lengthy and seemingly warm embrace between Brady and Robert Kraft, with the quarterback towering over the Patriots owner outside the visitor’s locker room.

Brady, who left New England in 2020 after leading the Patriots to those six Super Bowl titles, then won another in his first season with Tampa Bay, even appeared comfortable heading to a dressing room he was totally unfamiliar with.

Not that anything should have seemed close to normal for the most anticipated match of the early NFL season. Brady’s mediocre first half in the wet conditions added to the unusual scene.

In the parking lots, hundreds of fans were wearing No. 12 Patriots jerseys, and there was a smattering of Buccaneers Brady kits, too. Josh Nelson of Burrillville, Rhode Island, went with the split look. 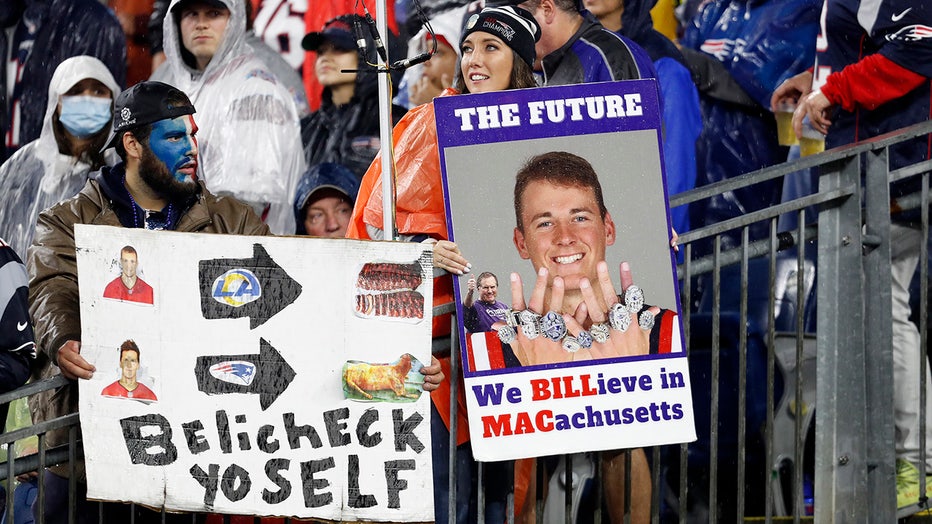 "He’s a classy guy. I’ve been a Tom Brady fan forever," said Nelson, a season ticket holder for more than seven years. "The memories of Tom Brady and Bill Belichick, we can’t forget that success."

Asked, then, why he was sporting the New England/Tampa Bay jersey, Nelson laughed and replied "I sought it out."

Devon Poduje, 20, of West Hartford, Connecticut, who attends the University of Maryland and drove up for the hero’s return, was rocking a new Bucs No. 12 jersey, while her 13-year-old sister, Tiegan, stuck with the traditional Patriots shirt. The entire family was split on who would win — 3-2 in favor of the hosts — but all noted they expected a rousing reception for Brady.

Before kickoff, that is. And they were correct.

"This worked out really well with his going to Tampa," Devon said, noting the family’s NFC team has been the Bucs. "And then winning the Super Bowl."

Knowing Brady was a lock to break Brees’ NFL record for yards passing, she said he would receive "absolutely a standing ovation" when he did that.

Her sister Riley added: "He set most of those yards here."

Yet the reaction was underwhelming when it happened.

Another fan in Bucs garb, Brody Swanson of Mapleton, Utah, had flown in for the game — and isn’t a fan of either team. His favorites are the Raiders. But he purchased the Brady jersey on Saturday, wanting to be a part of "history."

Elaina Roundy, also of Mapleton, noted that "everybody was buying Brady jerseys" in the Patriots’ store, and that she often has flown to games in which he played.

Well, this night in Foxborough, they could.

Two fans who were willing to pay big money for tickets, but were fortunate not to have to fork out four figures, expected an "insane" atmosphere all night.

C.J. Dalton of Rindge, New Hampshire, said he would be on his feet for Brady until kickoff.

"It’s all Patriots once the game starts," he noted.