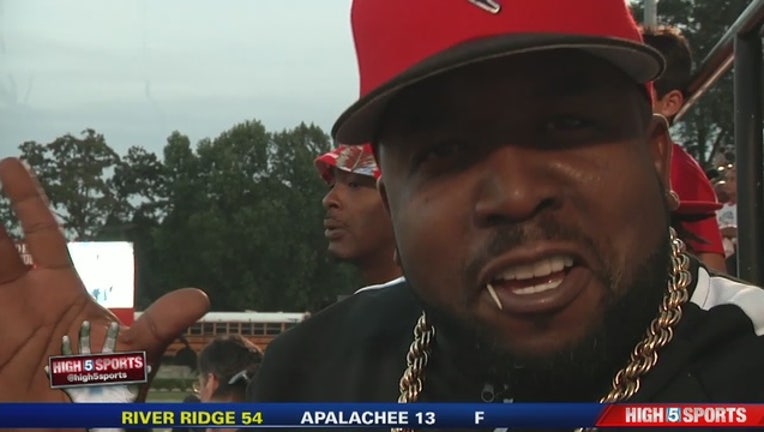 ATLANTA - Only the strong survive and for those reading, this can take comfort in knowing they survived. And the HIGH 5 Sports Team is grateful for those who did because that means they can catch all the best high school football action Friday night has to over in Georgia.

But we get some folks may be out at games or were just too busy to catch the Big Show which airs weekly Friday night at 11 p.m. all football season long. So, we compiled a recap right here. You’re welcome!

Here's a recap of the Big Show from Week Two:

Before the Big Show, it’s the big play… The Play of the Night. It airs weekly during FOX 5 News at 10 and don’t worry, if you missed it, we’ll always have it here.

This week’s Play of the Week is from the Decatur-Chamblee game.

For Decatur Bulldogs, he might be 5’6”, but it is not the size of the dog. Yodie Kilgore was all over it for Decatur and the best of all, he wears a number 5 jersey. He’s so #INYOURFACE.

The Big Show began with the assault on the mind and body at Grayson High School. Many consider this matchup a battle between two top teams in the country. It pits State Champion Rams against the Bucs of Hoover Alabama. And it was a game that did not disappoint.

The Dacula Falcons were at the Castle in Central Gwinnett taking on the Black Knights.

It was the 51st meeting between the Tucker Tigers and the Lakeside Vikings. This is the most played Dekalb County rivalry. And it was on again Friday night.

This is a personal battle for some of us here HIGH 5 Sports. The Decatur Bulldogs and Chamblee Bulldogs battled it out to win out hearts.

We move forward with the Westminster Wildcats playing the Spartans of GAC.

This is the season opener for the George Walton Academy Bulldogs, visiting the Redskins of Social Circle, who started last week with a win.

Continuing to head east, where the Newton Rams hosted the Eastside Eagles! Both won their openers last week.

At Rabun County, this was the season opener for Coach Lee Shaw and the Wildcats. They're hosting the Patriots of Mt. Pisgah, who started last week with a victory over Holy Innocents.

One of the biggest international recording artists from right here in Atlanta is exhibiting some HIGH 5 fever symptoms! And he is featured in our Mic'D Up segment this week.

Apalachee Wildcats starting the season with a visit to Woodstock, home of the River Ridge Knights. These highlights are courtesy of our partners at Chattahoochee Tech!

Arabia Mountain at MLK – Game of the Week

Alright, it’s time. The wait is over for our Game of the Week between Arabia Mountain and MLK. Who wants to win the golden hand trophy? Bill Hartman and Super Blaine got that answer to the all-important question!

In East Cobb, it was a Battle of Frenemies! Neighbors: Pope Greyhounds and Lassiter Trojans set everything aside and laid it all out on the gridiron.

Brookwood Broncos started with a loss last week to Archer. Walton beat North Gwinnett in their opener. And the two meet Friday night in Raider Valley.

This is a matchup that shouldn't be missed.

The Jackson Red Devils and Mary Persons Bulldogs game; this one is being played in “The Pitt” in Forsyth. Both were looking for their first win.

Warner Robins fans and a fire-breathing demon showed up for this game.

The Demons football team was backed up, Locust Grove's Craven Goodman gets the sack.

Locust Grove's offense got stuck in neutral, dropped for a sack.

And you’ll just have to see who wins it.

And that’s it for Week Two! We'll be back again next Friday.