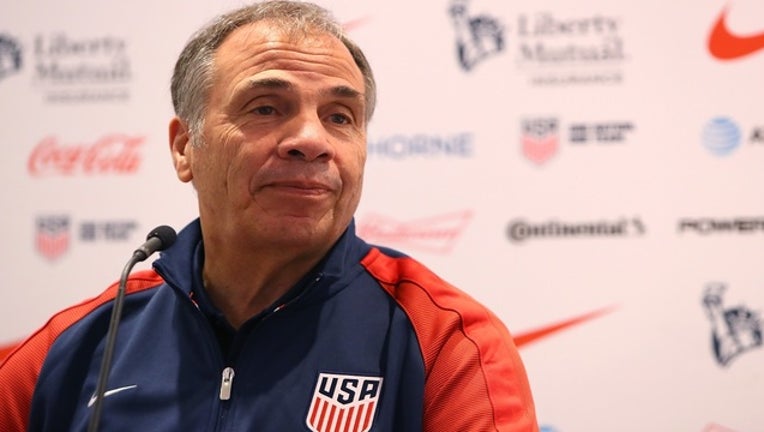 NEW YORK (AP) - Bruce Arena quickly resigned as U.S. coach after the Americans' failure to qualify for the World Cup. U.S. Soccer Federation President Sunil Gulati is staying around, at least for now.

"There's no point in me being around," Arena said in a telephone interview with The Associated Press. "I'm not going to be around for the next cycle. The only thing I regret, obviously, is not having a cycle with the team, because you need more time than 10 months with a team. But I knew that in advance of it, so I'm responsible for it."

The USSF, which will miss the World Cup for the first time since 1986, said it will announce within 10 days an interim coach for planned exhibition games next month.

Gulati, speaking during a telephone news conference, said he did not plan to resign. He said it was not the right time to talk about whether he will seek a fourth four-year term Feb. 10 during the federation's annual meeting but did say in recent weeks he had sent letters to people seeking to be nominated.

Gulati said the federation held a board meeting Thursday night and will seek "outside expertise" as it evaluates what went wrong.

"We'll look at everything, from our player development programs to our coaching to our refereeing to our facilities to the pay-to-play model to the role of education and universities," he said. "Where we need to make major changes, we'll do that. Where we need to make incremental changes, we'll do that. We'll take our time with that and unfortunately we have the luxury of time before we have competitive games again with the senior team."

A 66-year-old member of the U.S. National Soccer Hall of Fame, Arena coached the U.S. from 1998-2006, including a trip to the 2002 World Cup quarterfinals, the best American finish since the first tournament in 1930.

He was fired by Gulati after group-stage elimination in 2006, then brought back last November after a 0-2 start in the final round of qualifying in the North and Central American region under Jurgen Klinsmann. The Americans were unbeaten in their first 14 games under Arena, winning their third CONCACAF Gold Cup under him, but they lost a home qualifier to Costa Rica 2-0 last month, putting a berth in danger.

A 4-0 home win over Panama last week put the U.S. back in position for an eighth straight World Cup trip and the Americans needed only a draw at Trinidad. After months of constant lineup changes, Arena kept the same 11 starters, and the Americans fell behind by two goals in the first half.

With three wins, four losses and three ties, the U.S. finished fifth among six teams in the hexagonal. Panama climbed to third and qualified, and fourth-place Honduras will meet Australia in a playoff next month for a berth.

"I don't know how anyone could ever say lack of desire. I think that's a terrible statement. It really is," Arena said. "This is a group of guys with a lot of character. They came into 2017 with not the odds in their favor to qualify. It took a lot of hard work to get to where the program got at the end where we could have qualified. So to say a lack of desire I think is insane. You hear that. You hear all the stupid stuff days after, but for whatever reason we played very poorly in the first half against Trinidad, and it cost us."

"Oddly enough, I've had some inquiries, already," he said. "There's options for me that I have to sort out and see what makes sense."

Gulati ruled out his own resignation after the qualifying failure.

"Most coaches do, but it's not the cases that most presidents do, and I'm not planning to," he said. "We've got a lot of things on our agenda, including a World Cup bid that is due in the end of March and a decision in June."

The deadline for nominations for a four-year term is Dec. 12, and voters include representatives of professional, youth and adult soccer plus athletes, administrators and even two fans.

Guilatii may run for another term because of "where the sport is now and the role I've played in it and the role I think I can play going forward if I choose to run."

"The sport is in a very, very different place than it was 10 years ago or 30 years ago when I first got involved," he said.