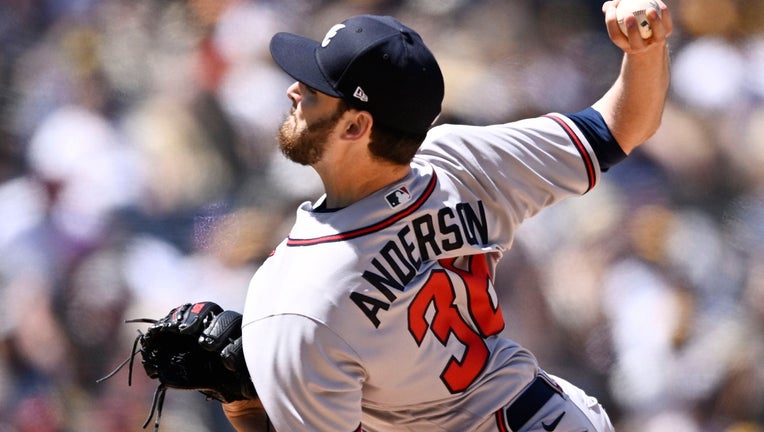 Ian Anderson #36 of the Atlanta Braves pitches during the first inning of a baseball game against the San Diego Padres on April 16, 2022 at Petco Park in San Diego, California. (Photo by Denis Poroy/Getty Images)

"I felt like I was back to my normal self," Anderson said. "It felt good to get back out there and pound the zone the way I did."

"We’re swinging at some first pitches that aren’t strikes and doing the pitcher some favors at times. Especially for a guy (Anderson) that didn’t have great command last time, we kind of let him off the hook," Padres manager Bob Melvin said. "He didn’t have to work as hard as we would have liked."

Padres rookie starter Nick Martinez (0-1) was stung by the long ball. Ozzie Albies hit a solo shot on his second pitch of the game, giving him a homer in all three games of this series so far.

"Olson is phenomenal," Anderson said. "He does it all."

Manny Piña also may have gone deep, but center fielder Trent Grisham made a sensational leaping catch at the wall in the second.

"I thought that one ball he (Piña) hit was out. He smoked one to center," Braves manager Brian Snitker said. "Ozuna is hitting balls like we are accustomed to see him hit."

Jurickson Profar homered off Anderson in the second, and Grisham had a solo shot in the eighth. The Padres have lost four of five.

"I just hung a breaking ball (to Profar). He put a good at-bat together," Anderson said. "He put a good swing on it."

Kenley Janson pitched the ninth for his second save.

Piña had a two-out, RBI single in the fourth before Olson and Ozuna tacked on solo shots in the fifth.

"It was good to see Piña get an RBI," Snitker said. "He did a great job with Ian, that’s why we got him, that veteran catcher presence that he is going to bring every time."

Padres: Outfielder Wil Myers (right thumb soreness) missed Saturday’s game and will miss Sunday’s game with an injury that flared up in his final at-bat on Friday night. He is day-to-day and San Diego does not anticipate he will have an IL stint. ... Reinstated RHP Luis Garcia from the 10-day IL and options RHP Kyle Tyler to Triple-A El Paso.