Gov. Kemp, GEMA, and other state officials held a news conference Friday to discuss preparations ahead of possible snow and freezing rain.

ATLANTA - Gov. Brian Kemp is encouraging Georgians to stay updated on the forecast and "plan accordingly" ahead of the winter weather system expected to impact parts of the state this weekend.

"By being ready and knowing what to do in the event of winter weather, you can help us minimize risk, reduce the time it takes to recover, and most importantly keep everyone safe," Kemp said during a press conference Friday afternoon.

State officials say while there remains some uncertainty about the storm, it is clear that parts of Georgia are going to experience "a significant weather event."

The FOX 5 Storm Team has been telling residents all week of the possibility of snow and ice as a winter storm moves into the region.

Up to 5 inches (13 centimeters) of snow will be possible in the north Georgia mountains, with higher amounts possible in some spots, according to the National Weather Service.

Winter storm watches were posted for Saturday for parts of Georgia, South Carolina and northern Mississippi.

What will be important is how the system tracks through Georgia and how much cold air is already in place. A stronger wedge leads to an icier scenario for northeast Georgia and parts of metro Atlanta. Ice build-up could lead to power outages.

"If you're in that area, make sure you are preparing yourself ahead of time," Stallings said.

Those who are planning on going to Athens, Georgia Saturday for the College Football Playoff National Championship celebration honoring the Bulldogs are being advised to "make every effort to get home Saturday night."

Atlanta is likely not to be unscathed. Officials are expecting some snow and ice in the metro at the least.

The FOX 5 Storm Team says snow could be falling in Atlanta and surrounding metro counties by 7 a.m. Sunday. The extended outlook shows the wintry precipitation stretching as far south as Macon, barely making it far enough to the west to touch Troup County and spanning east into South Carolina. 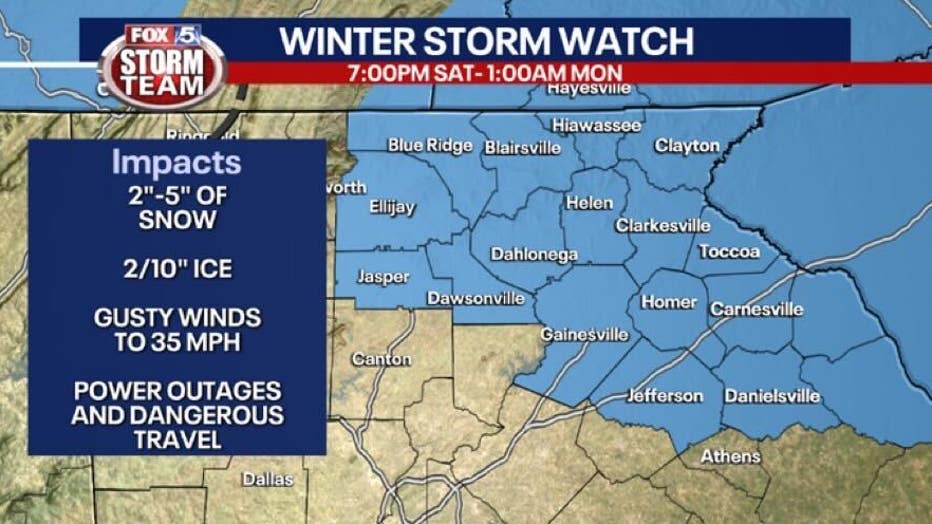 Neighboring South Carolina could see 2 to 5 inches (5 to 13 centimeters) of sleet, snow, and ice this weekend.

In Alabama, some snow will be possible, with northern counties the most likely to get snowfall.

Col. Chris Wright with the Georgia Department of Public Safety urged people to only go out if necessary.

"We encourage everyone to stay off the roadways this weekend if at all possible," said Col. Wright. "Because you only create a danger for yourself, the occupants of your vehicle and other people that may be on the roadway. You also create a danger to first responders that may have to come and try to assist you in some manner."

Col. Wright said anyone who has to venture out should make sure to have:

"We cannot overemphasize our state is going to be impacted in some manner with this storm. So, we can't overemphasize the point that everyone needs to watch the weather, pay attention to the weather and stay home if you can at all costs," Col. Wright added.

The Georgia Department of Transportation says it is "preparing for the worst," treating interstates and state routes from Columbus to Jackson and all the way over toward Augusta.

Local governments have been planning for some potentially rough weather, and individuals are getting ready as well.

Around Atlanta, where pockets of freezing rain and a rain and snow mix are likely in the metro, crews were out Friday morning treating roads and bridges. 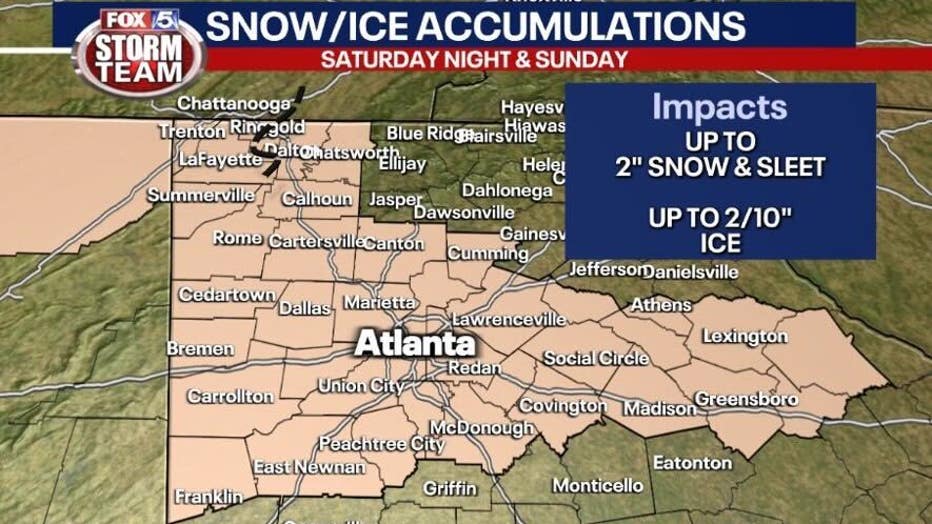 Nearby at the Cobb Department of Transportation, crews spent Thursday adding spreaders to dump trucks and checking equipment.

"Just making sure everything is working properly, so we don't' have any issues once we get started," said Bill Limbaugh with Cobb DOT.

GDOT says it is closely monitoring the incoming weather. They anticipate icy conditions in at least part of the state.

They are urging people to stay off the roads s if they're covered in ice.

"Get your bread and milk now, plan to stay home, and we'll get through another one," said Natalie Dale with GDOT.

The Georgia State Patrol says troopers will be out tagging abandoned cars along the side of the road. If they're not gone within 24 hours of being tagged they will be towed. They say  emergency lanes need to be open for salt and brine trucks as well as emergency vehicles.