Although lethal injection is most common, many states offer alternative methods to execution.

ATMORE, Ala. - An Alabama man whose execution was delayed in February was put to death on Thursday for the 1991 shooting death of a 22-year-old woman who was abducted during a robbery and later shot in a cemetery.

Willie B. Smith III, 52, received a lethal injection at a prison in southwest Alabama. He was pronounced dead at 9:47 p.m. local time and gave no last words, according to the Associated Press.

The execution went forward after the U.S. Supreme Court rejected a request for a stay by his lawyers, who had argued the execution should be blocked on grounds that Smith had an intellectual disability meriting further scrutiny by the courts.

Smith was convicted of kidnapping and murdering Sharma Ruth Johnson in October 1991. Johnson was the sister of a Birmingham police officer.

Smith had a shotgun when he abducted Johnson from an ATM location in the Birmingham area, prosecutors said. He emptied Johnson’s bank account using her card — withdrawing just $80 — while she was locked in the trunk of her car, according to the Alabama Attorney General.

He later drove with others in the car to a cemetery and shot her in the back of the head, authorities said. 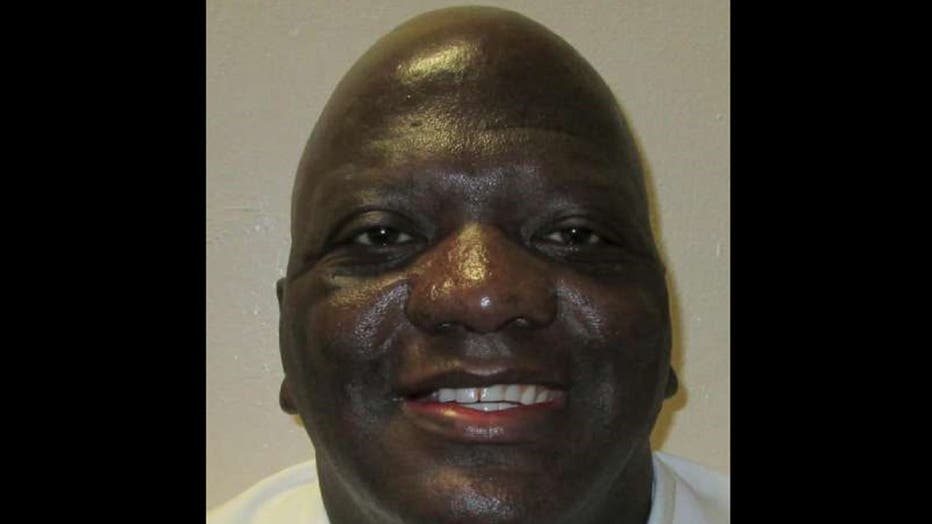 "Sharma Johnson’s remains were later found in the trunk of her car where Smith had abandoned it and set it ablaze," according to the Alabama Attorney General’s summary of facts about the case. "After Smith boasted about his crimes in horrific detail to an acquaintance wearing a police wire, he was arrested and charged with two counts of capital murder for his execution-style slaying."

"After waiting for 30 years, justice has been served," Johnson's family said in a statement read by Alabama Corrections Commissioner Jeff Dunn.

The execution began shortly after 9:30 p.m. The state allowed a personal pastor with the inmate for the first time during the execution. Pastor Robert Wiley appeared to pray with Smith and put his hand on his leg as the lethal injection procedure began.

One of his attorneys held his fist up to the witness room glass in an apparent sign of support.

The court had halted an earlier execution date for Smith in February when he was already in a holding cell near the death chamber and the U.S. Supreme Court agreed with his appeal that he could not be put to death without his personal pastor present.

Smith appeared to quickly jerk twice upward on the gurney as the first drugs hit his system. "That's the midazolam," one of his attorneys said in reference to the sedative, used at the start of executions that has been the subject of litigation.

His breathing was initially labored but then slowed and stopped.

Alabama's Department of Corrections changed some procedures in the face of the COVID-19 pandemic. The prison system limited media witnesses to the execution to one journalist, a representative from The Associated Press, instead of the five previously allowed.

Members of Johnson's family watched the execution in a separate room from Smith's attorneys and the media. Dunn said the execution went "according to our protocol."

"Sharma Ruth Johnson was abducted at gunpoint, threatened while in the trunk of the car, terrorized, assaulted, and ultimately, Willie B. Smith, III brutally killed her," Alabama Gov. Kay Ivey said in a statement issued after the execution.

"The evidence in this case was overwhelming, and justice has been rightfully served," she added.

Recently, Smith's lawyers had argued unsuccessfully that the inmate had an intellectual disability that prevented him from understanding the prison paperwork related to the selection of an execution method.

The Supreme Court ruled in 2002 that executing intellectually disabled people is unconstitutional, but courts have ruled that Smith was eligible for the death penalty.

Experts had estimated Smith’s IQ from 64 on the low end and 75 on the high end, but courts have ruled he was eligible for the death penalty. An expert in a post-trial appeal said while Smith’s IQ was measured at 64, his language, reading, and mathematics skills, and that these particular results were inconsistent with a diagnosis of intellectual disability.

The court made its ruling on Monday, June 29.

Last-minute court filings had centered on whether Smith should have been given assistance under the Americans With Disabilities Act to understand the form distributed to death row inmates in 2018 regarding the selection of an execution method. After adopting nitrogen hypoxia as an execution method, state law gave inmates a 30-day window to request that as their preferred execution method.

If Smith had requested nitrogen hypoxia, his death sentence could not have been carried out to date because the state has not yet developed a system for using nitrogen to execute inmates.

Smith's attorneys had unsuccessfully asked the Supreme Court to stay the execution until a trial could be held in his ongoing lawsuit arguing that the Americans with Disabilities Act required him to have assistance in understanding the form.

The state of Alabama argued that Smith had received access to his lawyers for help.

While the Supreme Court let the execution go forward, Justice Sonia Sotomayor criticized Alabama's haphazard approach but noted that she was "respecting the denial of the stay."

"Alabama does not dispute that Willie Smith has significantly below-average intellectual functioning. Although the State debates his precise reading level and IQ, those disputes do not resolve the fundamental inequity: the State’s compressed timeline for notifying eligible inmates and haphazard approach to doing so," Sotomayor wrote.

"The family of Sharma Johnson has had to wait 29 years, 11 months, and 25 days to see the sentence of Sharma’s murderer be carried out," Marshall wrote. "Finally, the cruel and unusual punishment that has been inflicted upon them – a decades-long denial of justice – has come to an end."