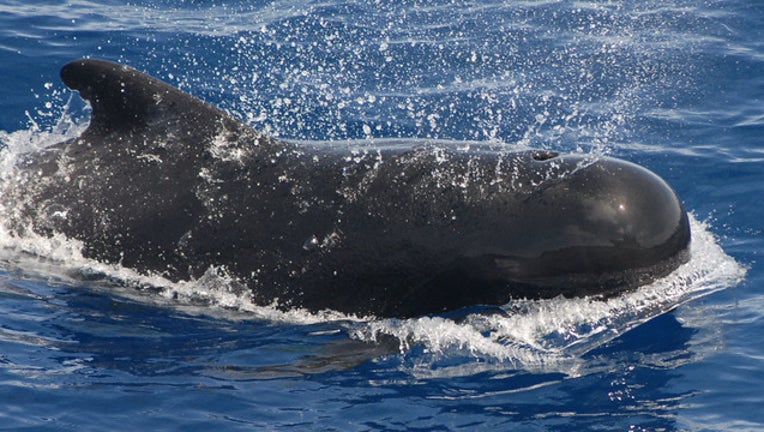 SAVANNAH, Ga. (AP) - Examinations of the carcasses of three pilot whales yielded no immediate answers to why they swam ashore and died on a popular beach in Georgia, state wildlife officials said Thursday.

Those were the only confirmed deaths after dozens of disoriented pilot whales on July 16 appeared perilously close to the shore of St. Simons Island, about 70 miles south of Savannah. Vacationers joined lifeguards and wildlife crews in the water to keep most of the whales from becoming stranded on the beach.

Necropsies performed on the dead whales found no wounds from boat collisions, ingested plastics or other obvious injuries that might point to why they beached themselves, said Clay George, a wildlife biologist with the Georgia Department of Natural Resources.

"There was no smoking gun that showed a natural cause of death or a human cause," George said.

Scientists examining the carcasses did find some mild signs of disease, which is common in wild animals, the Department of Natural Resources said in a news release. Two of them had parasites that can cause brain lesions in some whales and dolphins, but leave others healthy.

George said the gastrointestinal tracts of all three whales were empty. That could mean they were in poor health, he said, or indicate the whales were away from their normal deep-water habitat for an extended period.

Pilot whales typically would be found about 100 miles from shore, George said.

Follow-up tests, including microscopic examination of tissues collected from each dead whale, are planned, the Georgia DNR said, and results will likely not be available for months.

George said it's possible scientists will never know why the whales came ashore.

Pilot whales are members of the dolphin family and can grow up to 20 feet long and weigh as much as 3 tons (2.7 metric tons). Pilot whales are often involved in mass strandings, partly due to their social nature, according to the American Cetacean Society.