A white Rissos dolphin was spotted Friday by a group of whale watchers off the Southern California coastline.

A white Risso's dolphin was spotted Friday by a group of whale watchers off the Southern California coastline.

In a Sunday video from Dana Point's "Dana Wharf Whale Watch," a man on a microphone is heard pointing out the rare animal in a pod of what Fox 35 reported was 30 to 40 other dolphins.

In an accompanying Facebook post, the group clarified that the Risso's dolphin is "leucistic" and "not an albino." 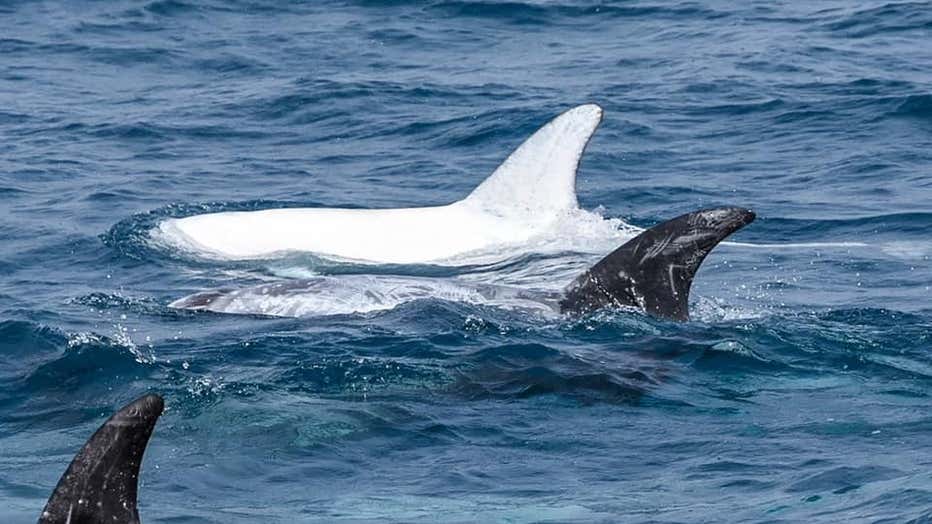 "This included a mixed pod of both bottlenose and Risso’s and also a leucistic Risso’s dolphin. This dolphin has been seen at least three times since 2018 from San Diego to Catalina and most recently off Laguna Beach earlier this week," she explained.

The Merriam-Webster Dictionary defines leucism as a genetic condition that results in reduced pigmentation and is caused by a genetic mutation that inhibits melanin and other pigments.

According to NOAA, Risso's dolphins – sometimes called gray dolphins – are found in "the temperate and tropical zones of all the world’s oceans" and usually prefer deep offshore waters.

The dolphins can weigh up to 1,100 pounds, are up to 13 feet long and live for 35 years or more in the areas surrounding Alaska, New England, the Mid-Atlantic, the Pacific Islands, the Southeast and the West Coast.

The agency says that Risso's dolphins are typically found in groups of between 10 and 30 animals and occasionally associated with other dolphins and whales.

Although they are not listed as endangered or threatened, they are protected under the Marine Mammal Protection Act.