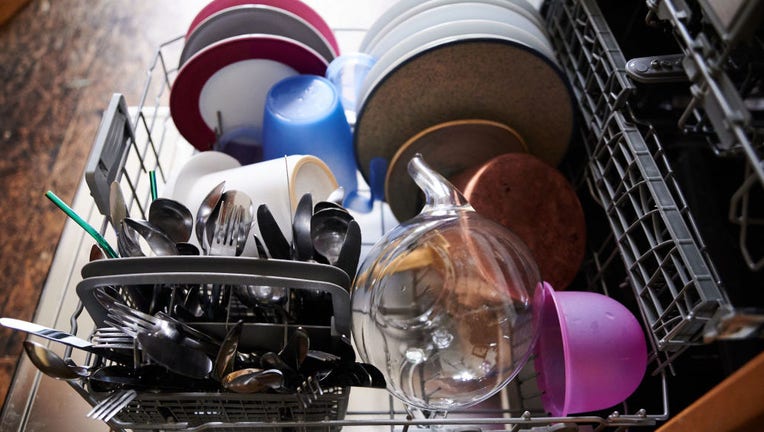 FILE - Various plates, cutlery, a teapot, and plastic containers are pictured in a dishwasher on Feb. 4, 2021. (Photo by Annette Riedl/picture alliance via Getty Images)

Compared to handwashing, running a dishwasher can help families save time and use less water, yet one in five U.S. households with one say they don’t even use it.

The U.S. Energy Information Administration estimates that over 89 million homes in America have a dishwasher. Its most recent Residential Energy Consumption Survey published in 2020 found that among those households, over 19% — or nearly one in five — said it goes unused.

The reasons why seem to vary, including everything from cultural differences to distrust in technology and preference for doing the chore by hand. A Reddit user posed this question, garnering many responses. Some said they only use their dishwasher as a drying or storage rack.

"We only use the dishwasher when we have family over and there are lots of dirty dishes. With just 2 of us, it's not difficult to hand-wash and doesn't take long," one person replied.

"My dishwasher is old, small, sucks. And I have far too many things that have to be hand washed anyway," another answered.

"My grandpa (who lives alone, but also has a much smaller dishwasher) doesn't use his at all, except after big family gatherings," another person explained. "I believe he is a bit anxious about this 'newfangled' technology, afraid to operate it incorrectly, and he also enjoys how washing the dishes by hand gives him something to do, to pass the time."

"I'm in my late 40s and I haven't used a dishwasher at any point in my entire life. I use it probably to store camping gear," another Reddit user replied.

But as concern for water scarcity grows around the world, some companies are pushing for customers to skip the sink rinse entirely.

Depending on where you live, water scarcity can be a part of life. In the U.S. West, severe drought continues to plague residents, who often are tasked with monitoring their usage. And scientists say climate change will only continue to drive longer, more severe droughts in the future.

‘Megadrought’ persists in western states with no end in sight, according to scientists

Worldwide, it’s estimated that 771 million people currently lack access to safe water, according to the international nonprofit Water.org, which aims to lessen that figure. Organizations like Unicef, World Wildlife Fund and others have sounded the alarm about the planet’s water shortage.

In an effort to signal concern and action, consumer foods giant Procter & Gamble announced a new strategy this summer to help address this water crisis.

P&G noted how it "needs water to make our products, and consumers need water to use most of our products." Among its goals, the company pledged to help with restoration in the water-stressed metropolitan areas of Los Angeles and Mexico City. It also is aiming to educate consumers on how to reduce their own water footprint at home.

Cascade, a dishwasher detergent brand by P&G, now encourages people to "rethink the sink." It suggests that people skip pre-rinsing dishes and instead run the dishwasher every night, saving gallons of water in the process.

Research from the U.S. Environmental Protection Agency seems to back up this claim, too. The EPA runs Energy Star, an energy program founded in 1992 with labels on refrigerators, televisions, dishwashers, lightbulbs, and other household items. Products and appliances that receive this label help consumers save money on electricity bills and help protect the environment by causing fewer emissions from power plants.

The EPA says that households with an Energy Star dishwasher use nearly 5,000 gallons less water per year, compared to those who wash dishes by hand.

Finish, another dishwasher detergent brand sold by consumer products manufacturer Reckitt, has also pledged action when it comes to water shortages. It calls on customers to #SkipTheRinse via a pledge on its website.

For every #SkiptheRinse pledge made online through Dec. 21, 2022, the brand said it will contribute $1 to The Nature Conservancy, which aims to conserve both land and water, for a maximum contribution of $400,000.