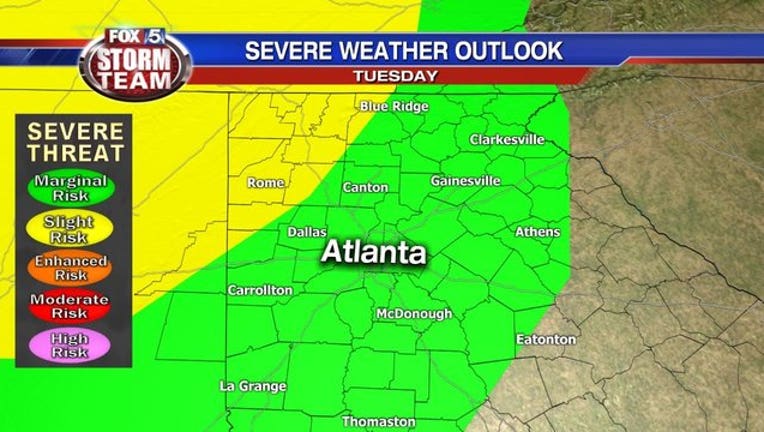 ATLANTA - Expect to see some areas of dense fog during the overnight and into the early morning hours on Tuesday. Extreme north Georgia will see the worse of the dense fog, but there could be some patches across the state. The fog will clear by late morning, making way for some spring-like weather.

The spring-like temperatures return on Tuesday and so do the threat of spring thunderstorms. A line of showers is expected to bring strong to severe storms through the area and it will impact the after commute on Tuesday.

The temperatures overnight into Tuesday morning won't get below about 50 degrees. Tuesday, expect to wake up to sunshine with the temperatures warming to the upper 70s, but that also depends on when the cloud cover starts to come into Georgia.

Some of these storms will have extremely heavy rain with wind in excess of 60 mph. There's also a slight risk of hail. The good news is the threat of tornadoes is low, but not completely at zero.

Again, the greatest risk from Tuesday's system is the rain with a half inch to 3/4 of an inch possible in metro Atlanta. North of that, some areas could see an inch and a half as these storms form a train.

These storms should be most diminished by the midnight hour. Another round is possible on Thursday.

Now is a good time to download the free FOX 5 Storm Team app which will push alerts to your mobile device when severe weather is near.