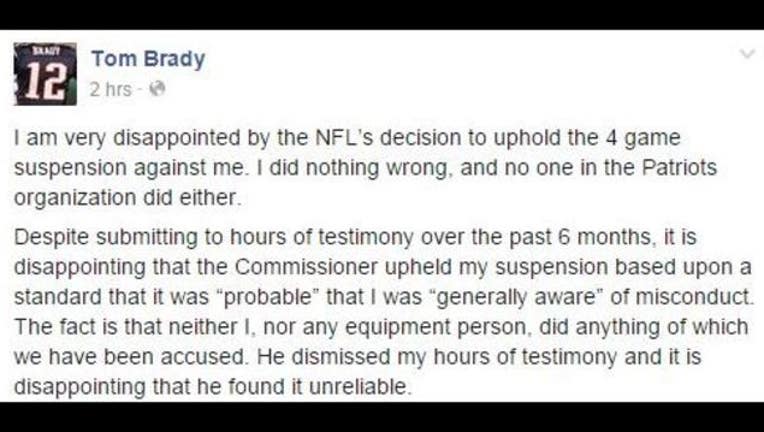 FOXBOROUGH, Mass. (AP) - Tom Brady vowed to fight his four-game suspension for the scandal known as Deflategate, writing Wednesday in a 507-word Facebook post: "I did nothing wrong, and no one in the Patriots organization did either."

Breaking his silence a day after NFL Commissioner Roger Goodell upheld the punishment, Brady also denied destroying his cellphone to keep it out of the hands of investigators.

"To suggest that I destroyed a phone to avoid giving the NFL information it requested is completely wrong," the three-time Super Bowl MVP said. "There is no 'smoking gun' and this controversy is manufactured to distract from the fact they have zero evidence of wrongdoing."

Brady was suspended four games and the team was docked $1 million and two draft picks after the league found improperly inflated footballs were used in the AFC championship game against the Indianapolis Colts. Investigator Ted Wells zeroed in on two equipment managers - one who called himself "The Deflator" - and said Brady was "at least generally aware" of the illegal deflation scheme.

The Patriots went on to win the Super Bowl for their fourth NFL title under Brady and coach Bill Belichick.

Brady, who had earlier denied cheating accusations with the tepid "I don't think so," more forcefully defended himself in the Facebook post, claiming he cooperated with the investigation except where doing so would have set a bad precedent for his union brethren.

"I respect the Commissioners authority, but he also has to respect the (collective bargaining agreement) and my rights as a private citizen," Brady wrote. "I will not allow my unfair discipline to become a precedent for other NFL players without a fight."

Much of the post involved an explanation of Brady's cellphone swap, which was cited by Goodell as new evidence of the quarterback's failure to cooperate. Brady said he replaced a broken phone only after his lawyers told the league they couldn't have it.

"Most importantly, I have never written, texted, emailed to anybody at anytime, anything related to football air pressure before this issue was raised at the AFC Championship game in January," he wrote.

Brady's comments were liked by 51,000 people - including his wife, supermodel Gisele Bundchen - in the first 30 minutes after it was posted on Facebook. The Patriots were scheduled to open training camp later Wednesday; it was not clear when Brady would speak to the media for the first time.