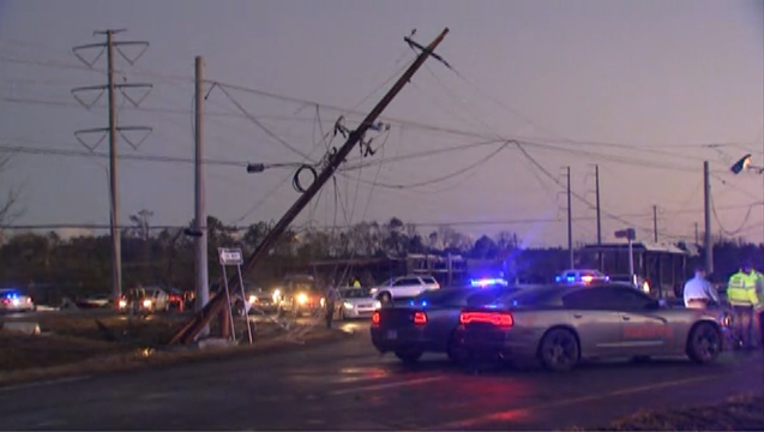 ALBANY, Ga. (AP) - A tornado warning on television sent Anthony Mitchell, his pregnant wife and their three children scrambling for what little shelter their mobile home could provide. They crouched in a hallway as the twister started taking their home apart piece by piece.

"The windows exploded, the doors flew off the hinges, the sheet rock started to rip off the walls and fly out the windows," Mitchell said. "The trailer started to lift up. And about that time a tree fell on the trailer, and I think that's what held the trailer in place from flying away."

An unusual midwinter barrage of tornadoes and thunderstorms over the weekend was blamed for at least 20 deaths across the Deep South. Among them were three people killed at Big Pine Estates, the mobile home park in Albany where the Williams family lives.

A twister slammed into the southwestern Georgia city of 76,000 people on Sunday afternoon, carving a path of destruction a half-mile wide in places and leaving the landscape strewn with broken trees and mangled sheet metal. Few of the roughly 200 homes at the trailer park escaped damage from the tornado, which was rated by forecasters as at least an EF-2, meaning it packed winds of 111 to 135 mph.

In addition to the three dead at Big Pine Estates, a fourth body was discovered at a home just outside the trailer park.

Mitchell lost his home and marveled that he didn't lose his life, too.

"Something helped us walk out the front door of the house," he said. "There's some people who weren't fortunate enough to have a front door to walk out of."

Georgia reported 15 deaths Sunday, and four people died Saturday in Mississippi. In northern Florida, a woman died after a tree crashed into her home in Lake City as a storm passed through.

The National Weather Service said 39 possible tornadoes were reported over the weekend. The agency sent out teams to examine the damage and confirm how many of the storms were twisters, which can happen any time of year but are far more common in the spring and early summer.

A day after the violent weather passed, search crews looked for people and pets in the Albany trailer park, stepping over tree limbs and ducking under splintered pine trunks as they went from home to home. One team discovered a terrified dog in a smashed-in trailer, where it had spent the night. Authorities said the pet owner's fate was unknown.

In rural Cook County, about 60 miles southeast of Albany, Aretha Allen prayed aloud in front of the First Baptist Church, where a shelter was set up after a possible tornado destroyed about half the homes at the Sunshine Acres mobile home park.

Allen said her niece, 41-year-old Lawansa Perry, and the niece's brother both lived there, and she drove out to try to help them after hearing the park had been hit.

"We were looking, looking," Allen said, "but couldn't find them."

The coroner later confirmed seven people were found dead at Sunshine Acres. Authorities said the victims included the niece and her brother.

"They died in the storm trying to save her grandchildren," she said, adding the children survived. "I know they've gone on to Jesus."

At Sunshine Acres on Monday, crews with cadaver dogs checked the wreckage a second day for anyone dead or alive. But the dogs found nothing, and authorities said owners would finally be allowed back Tuesday on those destroyed and damaged lots deemed safe.

Devocheo Williams, 29, said his home was demolished the day after he moved in.

"The whole trailer park was gone in 15 seconds," Williams said, describing a funnel cloud that appeared to loop back around and hit the neighborhood a second time. "It looked like a ball of fire was going 100 mph."

Williams said he saw a little girl picked up by the winds and tossed into a ditch. Nearby, the girl's mother and a baby were trapped in rubble. He said he helped dig them out.

Not everyone could be saved.

"I was walking by dead bodies of little kids and grown people," Williams said

Williams and others left homeless by the storm huddled Monday at the First Baptist Church in Adel, a rural community of about 5,300.

Residents turned out in force to help the victims. The church quickly collected an abundance of donated clothing and toiletries. Volunteers cooked free meals for survivors and emergency workers.

"We have turned away more people that just wanted to help because we just can't put them down here," said Brent Exum, chief investigator for the sheriff's department.

Dennis VanBrackle, 75, and his wife, Sylvia, stopped by the church with a checkbook in hand.

"Both of us physically can't do a lot," VanBrackle said. "We want to do what we can."

This story has corrected the last name of Aretha Allen.