The lawsuit claims White students were allowed to speak their minds, including wearing Confederate flag emblems and making racist statements, but they were suspended for wearing Black Lives Matter T-shirts. The school district declined to comment.

FLOYD COUNTY, Ga. - Students suspended from Coosa High School after a protest are suing the school district and board of education in Floyd County, alleging school leaders ignored complaints of racial intimidation and denied black students' rights to free speech.

The lawsuit alleges the school district enabled "overt bigotry and animosity by some white students and teachers against African American students." Attorney Harry Daniels said the school suspended students after a silent protest during class breaks. Administrators allegedly told students to turn shirts that said, "I love the skin I'm in #Melanin," inside out, or they would face suspension.

The plaintiffs, including some students' mothers, asked for their discipline records to be expunged and demanded an injunction to block the school district from selectively punishing students because of their speech.

"Whenever I would complain, they would say I try to make everything about race," she said

FOX 5 Atlanta has reached out to Floyd County School District, which said officials would not comment on pending litigation. 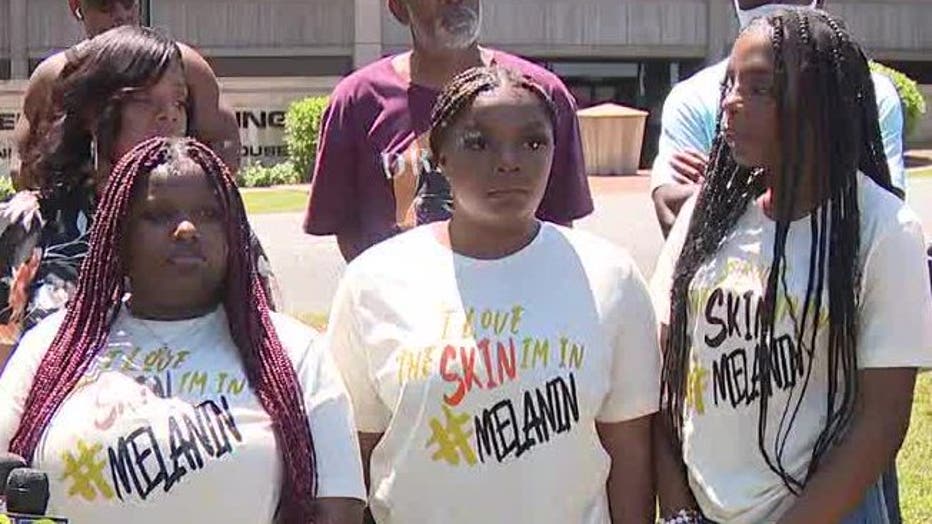 Attorney Harry Daniels said the students were suspended after a silent protest during breaks in class. They were told to turn shirts that said, "I love the skin I'm in #Melanin," inside out, or they would face suspension.

"We're not just talking about Coosa High School," said attorney Shannon Liss-Riordan, a lawyer running for attorney general in Massachusetts. "This case could be a prescient for schools across the country, because we are committed to ensuring that our public schools are a safe and inviting place for people of any race and background."

Students' parents say the school district has ignored written complaints to the school's principal and district superintendents to address alleged threats and insults. One mother, Jessica Murray, said a Floyd County police officer stopped her in traffic and school officials presented her with a letter threatening criminal trespassing charges if she was found again on school grounds. She said two weeks ago a Coosa High School administrator lifted her alleged ban.

"I'm emotional right now, I'm trying to hold it together because it's been a long journey," Murray said. "I've made so many complaints, I've been through two superintendents making complaints on this to just not be heard."

Parents feel the progress their parents made in civil rights movements is going backward.

"I think this is a sad day for Floyd County," said mother Lekisha Morgan "My father, my aunt, my mother, had sit-ins downtown. … I feel like my children are going through the same things my parents went through."