LOS ANGELES - A day that was typically filled with darkness and anger is now being celebrated in a new way.

April 24th is known as Armenian Genocide Remembrance Day, a day to honor the 1.5 million Armenians killed in 1915 by the Ottoman Empire. 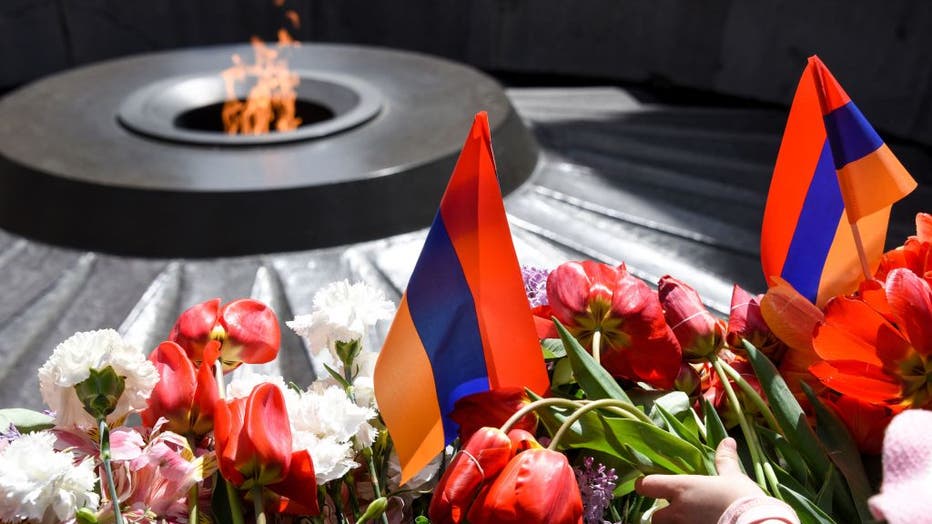 For decades, people around the world, especially in Los Angeles, take to streets each year to protest Turkey’s denial of the genocide and put pressure on the United State government to recognize that the systemic killing of Armenians was in fact genocide.

This year the demands of many were finally met as President Joe Biden became the first US president to formally recognize the Armenian Genocide.

For so many Armenian-Americans word of Biden’s recognition brought them great joy… but the message from the White House was long overdue.

Hasmik, a member of the Armenian Youth Federation, says the protests and rallies held Saturday are to honor the lives lost and pay tribute to her ancestors.

She told FOX 11 that Biden’s recognition was a direct response from the activism coming from the youth.

Demonstrator speaks about the importance of Biden’s Armenian genocide recognition

"We see the recognition from President Biden is a testament that activism works. This is a tribute to the generations of Armenian people, supporters, and allies that have fought day in and day out to get this recognition," she stated.

"It means a lot, this has never happened in history. They are finally being blamed for what they did over a 100 years ago. I think it’s huge, huge for the Armenian people and it’s not going to stop our fight. There’s a lot more to be done, it’s a very good first start to it," said one young demonstrator at a rally in Beverly Hills.

"For Armenian-Americans and everyone who believes in human rights and the truth, today marks an historic milestone: President Biden has defied Turkish threats and recognized the slaughter of 1.5 million Armenians for what it was -- the first genocide of the 20th Century. In so doing, he has cast aside decades of shameful silence and half-truths, and the broken promises of so many of his predecessors, and spoken truth to power,'' Schiff said.

"This is a momentous day for thousands upon thousands of my Armenian-American constituents who have been working, advocating, and praying for recognition for their entire lives -- and I am heartened that this announcement comes at a time when there are still some genocide survivors alive to witness it, though their numbers are very small. ... As we commemorate the 106th anniversary of the Armenian Genocide, we can now do so now, secure in the knowledge that our nation, both the President and the Congress, speak with one voice.''

Rep. Schiff led over a 100 House members in signing a bipartisan letter to Biden calling on him to recognize the genocide.

"This morning, President Joe Biden ended the decades long gag-rule by Turkey against the United States. By officially and properly recognizing the Armenian Genocide, the United States has demonstrated that human rights, justice, and truth have prevailed,'' Portantino said.

Los Angeles Mayor Eric Garcetti also commented on the announcement saying this day was long overdue and was 106 years in the making.

"Armenian-Americans belong here, they are our neighbors, our friends, they are us. But we can never forget why Armenians came here in the first place. With little in their pockets and few possessions to their name, fleeing war and running from genocide. They came to seek refuge," the mayor stated Saturday morning.

Los Angeles is home to the largest Armenian population outside of the country of Armenia.

Governor Gavin Newsom also issued a proclamation declaring April 24, 2021 as "A Day of Remembrance of the Armenian Genocide" in the State of California.