The man ordered food at the Snellville amusement park while he was celebrating his young niece's birthday. When the server handed him his receipt, he noticed a phrase with a racial slur on it.

SNELLVILLE, Ga. - An amusement park in Snellville, Georgia has apologized after a customer found a racial slur on his receipt.

Stephan Black says he was at Urban Air Adventure Park celebrating his 7-year-old niece's birthday. The family ordered food. When the server handed him his receipt, he noticed the phrase "Black n-word" on it.

Black says he was horrified and embarrassed.

"It was a little girl’s birthday, but the main thing was that that shouldn’t have happened, so I was just trying to hold it together for her, and actually I really was offended when I saw it," he said. 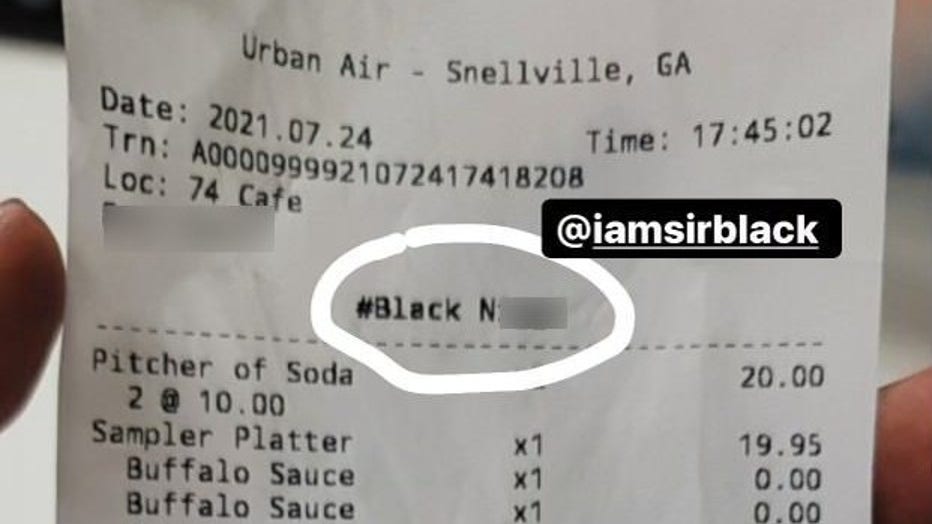 The park posted a message on Instagram, saying in part: "Urban Air Snellville, a Black-owned business, sincerely apologizes for the inappropriate comment from a former employee toward one of our valued guests. We have a zero-tolerance policy toward this type of behavior."

But Black says he does not accept this apology.

"It wasn’t sincere, because the conversation that was had in private, between me and the owner, it didn’t go in a good direction," he said.

Black said when he found the slur, the restaurant initially offered him free fries as a consolation.

He said he wants this to be a learning experience for the 16-year-old employee, who was fired after the incident.