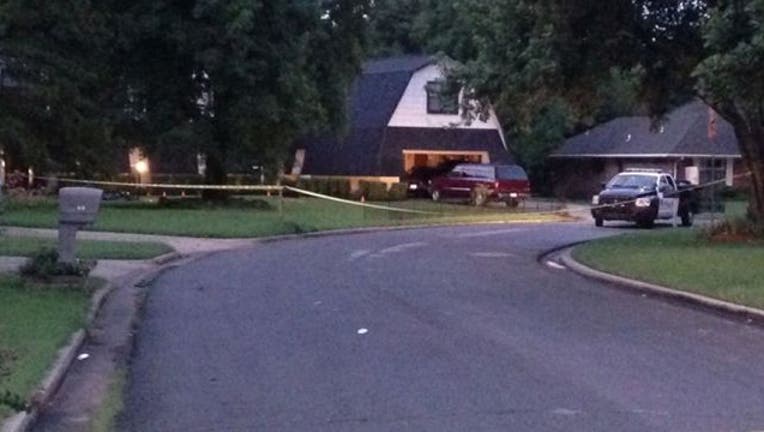 BROKEN ARROW, Okla. (AP) - Police responding to a silent 911 call found five people stabbed to death at a well-kept suburban Tulsa home, then detained two teenage male relatives of the victims after a police dog tracked them down in nearby woods.

Investigators, some wearing white booties to protect their shoes, stepped gingerly around a pool of blood near the front of the home Thursday morning. Other officers erected black tarps and blue tarps to shield the home from reporters and neighbors while they gathered clues. The bodies remained at the home into late-morning as police waited on a medical examiner.

"I've been here 19 years and I don't know if we've had more than three homicides in a year. I don't think we've had a single incident of this magnitude," said Broken Arrow Police Cpl. Leon Calhoun, the department spokesman.

Daylight revealed a black tarp near the home's front stoop, weighed down by a brick and flower pot. As officers worked behind their temporary tarp wall, a gust of wind blew down a segment, momentarily uncovering a bloody white sheet a few feet from the front door.

According to Calhoun, officers responding to the 911 call could not enter the house through the front door but heard moaning and found another way inside. They dragged a 13-year-old girl who survived the attack onto the front lawn, then found two other victims and, unsure if they were alive or dead but fearing a killer remained on the premises, took them outside, where the bodies remained at midday Thursday.

Three other bodies were inside the house.

Calhoun said police were struggling to notify next of kin because so many relatives were involved somehow.

Broken Arrow Police Sgt. Thomas Cooper said nine people were linked to the family home - the five dead, which included adults and juveniles; the 16- and 18-year-old relatives in custody; the 13-year-old girl in serious but stable condition with stab wounds; and a 2-year-old girl who was unharmed. The toddler was transferred to state custody, Cooper said.

Officers arrived before midnight Wednesday at the house near the Indian Springs Country Club after emergency operators received an "open 911 call" - a call in which no one speaks but the line remains connected. Police traced the number to the home and found a scene so disturbing that officers warned that it could take all of Thursday to process evidence.

"It certainly is shocking. I'm shocked," said Patricia Statham, a neighbor. "I feel so bad for everyone who walks into that house. You can see it in the faces of the officers when they come out."

Broken Arrow is on the Arkansas River, just southeast of Tulsa, and the home is in a well-established, upper-middle-class neighborhood surrounded on three sides by the country club. Property records showed the home sold for $245,000 in 2007, and Tulsa County tax records show it is among the largest and most expensive homes on the block.

Helen Hoagland, who has lived in the subdivision for 42 years, said she would sometimes see the mother walking in the neighborhood with several children whom she described as home schooled and kept on a tight leash.

Hoagland said the children used to help decorate the neighborhood's entrance each Christmas, but that they stopped taking part a few years ago.

"We just have a great neighborhood. That's just crazy; it's absolutely crazy," Hoagland said as she watched police work the crime scene before dawn.

Crime - particularly homicide - isn't usually a problem in Broken Arrow, a popular Tulsa suburb with a population of about 103,000.

"Usually the worst thing we have here is kids with baseball bats destroying mailboxes," said Statham, a retiree who has lived in the neighborhood for 38 years.

"Whenever I'd see the children with the mom, they always seemed OK," she said. "I saw them outside playing. I'd see the boys out mowing the lawn."