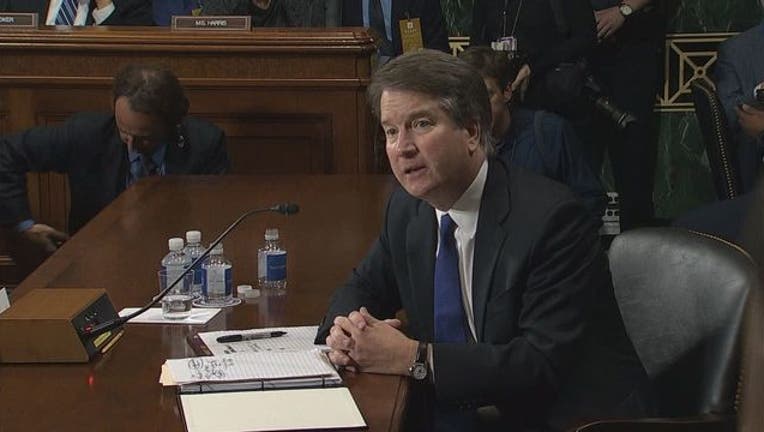 WASHINGTON - (AP) -- Senators began reviewing the new FBI background file on Supreme Court nominee Brett Kavanaugh Thursday and will use the confidential material about the judge's background to help decide how they'll vote on his precarious nomination.

Even before the FBI delivered the summaries of interviews on claims that Kavanaugh sexually abused women, Senate Majority leader Mitch McConnell set Friday as the first vote for his polarized chamber in an election-season battle over power and who to believe. A showdown roll call on confirmation seemed likely over the weekend.

The FBI interviews focus on allegations against Kavanaugh of sexual misconduct, although his critics have also called into question his drinking habits during high school and college. Kavanaugh strongly denies the sexual accusations and says stories of bad behavior while drinking are greatly exaggerated.

The White House received the FBI report around 3 a.m. Thursday, and President Donald Trump weighed in hours later in a tweet in which he denounced what he called "the harsh and unfair treatment" of Kavanaugh. "This great life cannot be ruined by mean" and "despicable Democrats and totally uncorroborated allegations!"

With Republicans clinging to a razor-thin 51-49 Senate majority and five senators -- including three Republicans -- still publicly undeclared, the conservative jurist's prospects of Senate confirmation remained murky and dependent, in part, on the file's contents, which are supposed to be kept secret.

The Trump administration is confident that after reviewing the material, senators will be comfortable about voting to confirm Kavanaugh, White House spokesman Raj Shah told reporters Thursday morning.

Shah would not disclose details of the FBI report, but said the agency reached out to 10 people and interviewed nine. "They interviewed several individuals at the request of the Senate, and had a series of follow-up interviews ... following certain leads," he said.

Shah rebuffed statements made by some Democrats, who said that other people had reached out to be interviewed by the FBI or the Judiciary Committee but were not.

"What critics want is a never-ending fishing expedition into high school drinking," Shah said, adding that the FBI investigation was focused on allegations of sexual allegations. "Senate Democrats have pursued a scorched-earth strategy and there is a lot of collateral damage."

Senators and a small number of top aides are being permitted to view the material it in a secure room in the Capitol complex. Senators are not supposed to divulge the contents of the agency's background reports.

Democratic Sen. Tammy Duckworth of Illinois told reporters Thursday that time slots for reading the FBI file are so full that senators are being told they might have to wait until Friday to read it.

"I can't get in," Duckworth said. "It's so backed up I might have to wait until tomorrow. They're so swamped."

The report arrived at a Capitol palpably tense over the political stakes of the nomination fight and from aggressive anti-Kavanaugh protesters who have rattled and reportedly harassed senators. Feeding the anxiety was an unusually beefy presence of the U.S. Capitol Police, who were keeping demonstrators and frequently reporters at arm's length by forming wedges around lawmakers walking through corridors.

Amid complaints that some lawmakers were being confronted outside their homes, McConnell claimed on the Senate floor that the protesters were "part of the organized effort" to derail Kavanaugh's nomination.

"There is no chance in the world that they're going to scare us out of doing our duty," he said.

"I would tell him, knock it off. You're not helping," Trump ally Sen. Lindsey Graham, R-S.C., said of Trump's Tuesday night tirade.

Barring leaks, it was unclear how much of the FBI report, if any, would be made public. While senators from both sides have expressed support for revealing at least parts of the findings, FBI background checks on nominees are supposed to remain confidential.

Underscoring rising tensions, Democrats suggested that previous FBI background checks of Kavanaugh may have unearthed misconduct by the nominee.

Democrats wrote to Grassley, R-Iowa, challenging a Tuesday tweet by GOP aides saying prior investigations never found "a whiff of ANY issue -- at all -- related in any way to inappropriate sexual behavior or alcohol abuse." Democrats wrote that the GOP tweet contained information that is "not accurate."

Committee Republicans tweeted in response that their prior tweet was "completely truthful" and accused Democrats of "false smears."

Those senators, along with Democrats Heidi Heitkamp of North Dakota and Joe Manchin of West Virginia, have yet to declare how they will vote.

"All of us need to keep in mind there's a few people that are on the fence right now. And right now, that's sort of where our focus needs to be," said Sen. Bob Corker of Tennessee, who has traded barbs with Trump and will retire at year's end.

Trump drew laughs Tuesday with his rendition of how Ford answered questions at last week's hearing. "I had one beer -- that's the only thing I remember," he stated inaccurately.

As he flew aboard Air Force One to the Mississippi rally, Trump was enraged by New York Times articles about Kavanaugh's high school and college years and alleging tax avoidance efforts by the president and his family, according to a person familiar with the situation who spoke on the condition of anonymity.

White House counselor Kellyanne Conway on Wednesday echoed the president's newly aggressive approach. She said Ford has "been treated like a Faberge egg by all of us, beginning with me and the president," and said Trump was merely "pointing out factual inconsistencies."

Trump himself didn't respond publicly to the criticism. On Twitter, he hailed Kavanaugh as "a fine man and great intellect" and insisted, "The country is with him all the way!"

The California psychology professor has testified that a drunken Kavanaugh sexually abused her in a locked room at a high school party in the 1980s and has said she believed he was trying to rape her. Kavanaugh has denied her assertions and those of two other women, who have accused him of other instances of sexual misconduct in the 1980s.

Democrats argued that the investigation has been insufficient, lacking interviews with her, with Kavanaugh and others who his accusers have said could know about the alleged incidents.

In a statement Wednesday night after McConnell set the vote in motion, Ford's counsel wrote: "An FBI supplemental background investigation that did not include an interview of Dr. Christine Blasey Ford -- nor the witnesses who corroborate her testimony -- cannot be called an investigation. We are profoundly disappointed that after the tremendous sacrifice she made in coming forward, those directing the FBI investigation were not interested in seeking the truth."

Corker and Sen. Mike Rounds, R-S.D., said senators were expecting the document to contain reports that FBI agents compile on their interviews with subjects, perhaps accompanied by a cover letter. Background checks do not traditionally contain investigators' conclusions about who they believe is credible.

Washington has been awaiting completion of the investigation since last week, when Flake, Collins and Murkowski pressured a reluctant Trump and GOP leaders to order the FBI to renew its background check of the 53-year-old Kavanaugh.

The FBI interviewed several people, including three who Ford has said attended a 1982 high school gathering in suburban Maryland where she says Kavanaugh's attack occurred, plus another Kavanaugh friend. The agency has also spoken to a second woman, Deborah Ramirez, who has claimed Kavanaugh exposed himself to her at a Yale party when both were freshmen.

Democrats also demanded that the FBI privately brief the Senate about the investigation before the chamber votes. McConnell rejected that request in a letter Wednesday to Schumer, saying Democrats would use it to delay Kavanaugh's confirmation.