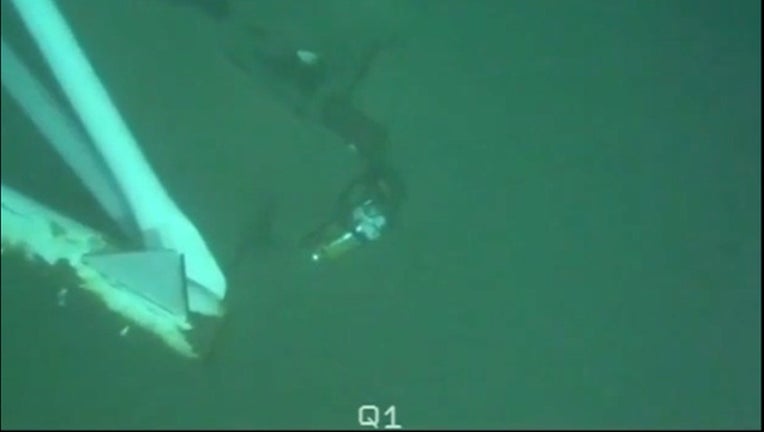 JACKSONVILLE (AP) - Search crews on Tuesday found the missing data recorder of the sunken freighter El Faro, which went down in 15,000 feet of water last year after getting caught in Hurricane Joaquin.

Scientists and federal accident investigators using a remotely-operated undersea vehicle found the device northeast of Acklins and Crooked Islands, Bahamas, the National Transportation Safety Board said. The small device was mounted to the El Faro's mast and has yet to be recovered, officials said.

"Finding an object about the size of a basketball almost three miles under the surface of the sea is a remarkable achievement," NTSB Chairman Christopher A. Hart said in a news release.  He added that they have not yet figured out how to retrieve the recorder.

The 790-foot freighter sank last October after losing propulsion while traveling between Jacksonville and San Juan, Puerto Rico. The ship got caught in Joaquin's 155 mph winds and strong seas. All 33 crew died.

The NTSB failed to find the data recorder in its first search of the wreckage near the Bahamas. The ship's top deck had broken loose and a breach was seen in its hull.

The device is capable of recording conversations and sounds on the El Faro's bridge, which may help investigators better understand the final moments of the ship's final journey.

Key questions remain about routing decisions made by ship Capt. Michael Davidson that took the ship closer to the path of the storm.

Up to now, investigators were working with very limited information about the ill-fated voyage. Davidson had been warned prior to the ship's sinking that the storm churning offshore was forecast to become a hurricane.

Yet, Davidson chose to take a faster path that took him closer to the hurricane's path, rather than a slower, but safer route. Why Davidson chose the less safe route is unknown.

A month prior to the El Faro's last journey during Tropical Storm Erika, Davidson had taken the slower, safer route after the company, Tote Services Inc. sent out a company alert about the storm. No alert was sent out prior to Joaquin, according to testimony before a U.S. Coast Guard panel investigating the sinking.

Some of the El Faro's crew's family members welcomed the news about the data recorder.

"It means a great deal," said Barry Young, the uncle of LaShawn Rivera of Jacksonville, the El Faro's chief cook. "Hopefully it will give more information as to what happened, and why it happened."