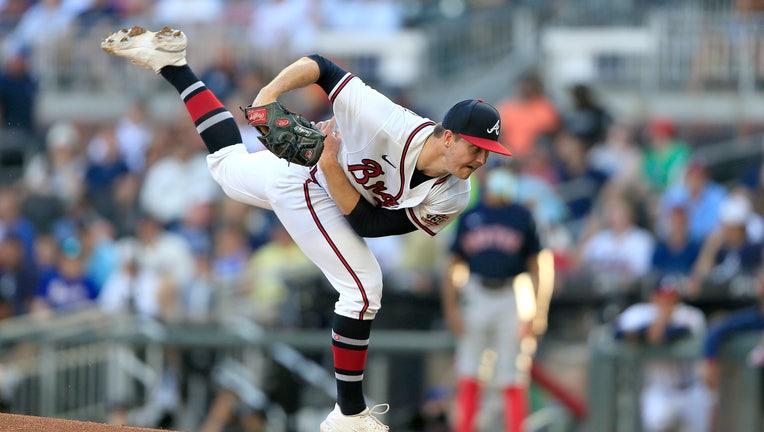 Rookie Tucker Davidson #64 of the Atlanta Braves throws during the Tuesday night MLB game between the Atlanta Braves and the Boston Red Sox on June 15, 2021 at Truist Park in Atlanta, Georgia. (Photo by David J. Griffin/Icon Sportswire via Getty Imag

ATLANTA - Tucker Davidson was in the lobby of a Courtyard Marriott in Gwinnett, Georgia, eating a salad from The Cheesecake Factory and watching the Atlanta Braves play their World Series opener, talking with Triple-A strength coach Paul Howey and Paul Davis, the roving pitching coordinator.

"We were just kind of sitting there, and Charlie went down, and we kind of looked around, like: This is why we’re here," Davidson said. "I stayed up, and I kind of had an idea that it might be me. I just had that gut feeling."

His phone rang shortly before 1 a.m. Ben Sestanovich, the Braves’ assistant general manager for player development was on the line.

Less than 24 hours later, the 25-year-old rookie left-hander from Amarillo, Texas, a pitcher with just five games of big league experience, was sitting in the interview room of Minute Maid Park, added to Atlanta’s World Series roster after Charlie Morton’s right fibula was broken in the opening 6-2 win over the Houston Astros.

Braves fans remained optimistic late Wednesday night despite Atlanta's 7-2 loss to the Astros. Fans said they are excited the World Series is headed to Atlanta starting Friday for three games.

Davidson took an Uber on Wednesday for the roughly one-hour drive to Hartsfield-Jackson Atlanta International Airport and traveled to Houston and put on jersey No. 64.

Hit by Yuli Gurriel’s liner, Morton went to Green Bay, Wisconsin, on Wednesday to be examined by Dr. Robert Anderson, a foot and ankle orthopedic specialist.

The Braves put Morton on the injured list and activated Davidson from the 60-day IL.

"He gives us an option for today, if we need him," Braves manager Brian Snitker said. "We were dealt a significant blow, and we’re just going to have to adjust and fight through it the best we can."

Davidson said it was too late for family to get to Houston, but mom Andrea and aunt Heidi Hanson hope to attend Game 3 on Friday at Atlanta’s Truist Park.

"Atlanta would like to sell out tickets in three minutes, so we’re kind of battling that," he said. "Can’t even find a hotel at this point."

A 19th-round draft pick from Midland College in 2016, Davidson made his big league debut on Sept. 26 last year against Boston, allowing seven runs — two earned — over a 1 2/3-inning start that took 99 pitches. After a scoreless first, Bobby Dalbec started the scoring with a two-run homer.

Donaldson began this year at Gwinnett, was called up in May and didn’t get a decision in a six-inning outing against the Mets. After another start in the minors, he pitched shutout ball against Washington and Philadelphia, then gave up five runs over 2 1/3 innings against the Red Sox, leaving him with a 3.60 big season ERA.

Davidson went on the injured list on June 16 with left forearm inflammation and didn’t pitch in another game until Oct. 3 against Jackson at Triple-A,

"It’s definitely taught me to grow as a person and just be able to understand that things don’t happen as fast as you want them to," he said. "There’s plenty of times I was hurt where I was like I just want to pick up a ball and throw, but my body was not ready for that. So I had to really slow down, and I think that’s going to continue to help over the course of my career."

Davidson finished the Triple-A season 2-2 with a 1.17 ERA in four starts. He’s been pitching simulated games since.

"Reports were really good how he was throwing, and he feels good," Snitker said. "He did a really nice job for us when he was here the first time."

Max Fried on losing to Astros

Atlanta starting pitcher Max Fried talks about his loss to the Astros in Game Two of the World Series.

Davidson’s fastball averages about 93 mph and he mixes it with a slider, curve and changeup.

He already planned on how he intended to relax during a game on baseball’s ultimate stage.

"Whenever the moment gets big, kind of finding something that you can take your focus off of everything," he said. "So it might be a Coca-Cola sign down there, the foul pole, whatever the case may be. Just taking a second to look at it and kind of reset your brain and calm down and be like let’s execute this pitch."