WASHINGTON - The House committee investigating the Jan. 6, 2021 insurrection released video on Wednesday of a tour led by a Republican lawmaker the day before the attack, showing participants taking photos of stairwells and tunnels in the Capitol complex.

The panel released the video as it renewed calls for the GOP lawmaker, Georgia Rep. Barry Loudermilk, to speak to the committee about the tour. Loudermilk has so far declined the interview and denied any wrongdoing, and the chief of the U.S. Capitol Police said in a letter to Republicans this week that after reviewing surveillance video, "we do not consider any of the activities we observed as suspicious." 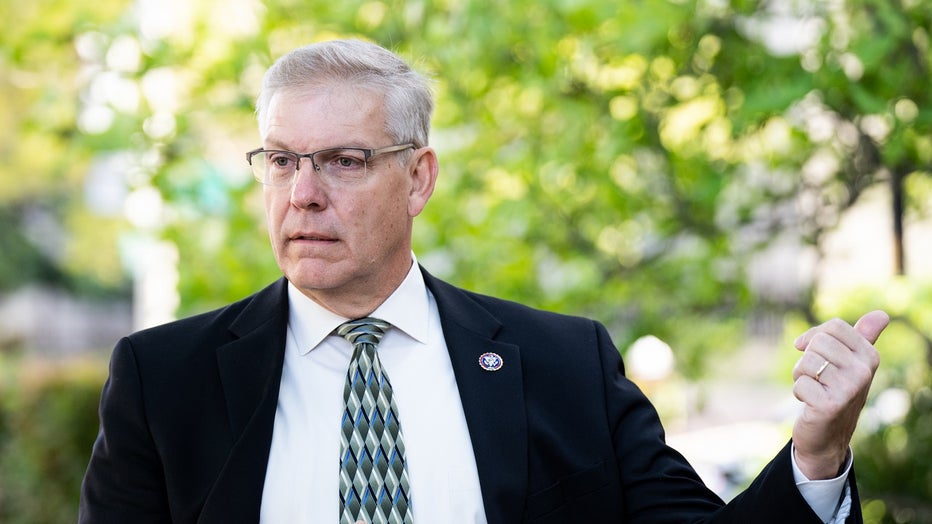 Still, the committee says it has questions. In addition to the surveillance video, the footage released by the panel also includes video of an unidentified man walking toward the Capitol on Jan. 6 holding a flagpole that appears to have a sharpened end, which he says is "for a certain person." The committee says the man who took the video, who is not seen in the footage but is laughing and urging on the man with the flag, is one of the tour participants who was taking photos inside the Capitol the day before.

The US House Select Committee to Investigate the January 6th Attack on the United States Capitol released video on Wednesday showing Rep. Barry Loudermilk, R-Georgia's 11th District, giving a tour on Jan. 5, 2021, to some of the same people see storming the Capitol the very next day.

"They’re coming in, coming in like white on rice for Pelosi, Nadler, even you, AOC," the man says in the video released by the committee. "We’re coming to take you out and pull you out by your hairs. … When I get done with you, you’re going to need a shine on top of that bald head."

The panel did not say whether the man got into the Capitol or whether he has faced any charges. While more than 800 people have been charged for breaking into the building, or for violently beating police officers, thousands of other protesters were outside the building or on the National Mall and did not engage in violence. The breach temporarily halted the certification of President Joe Biden’s victory.

In a Wednesday letter to Loudermilk renewing the request for an interview, Mississippi Rep. Bennie Thompson, the committee’s chairman, said the panel "had hoped to show you the video evidence when you met with us" but was releasing it publicly because Loudermilk had so far declined. Thompson said the areas photographed and recorded by some on the tour are "not typically of interest to tourists, including hallways, staircases, and security checkpoints."

Another member of the panel, Republican Rep. Adam Kinzinger of Illinois, tweeted after the video was released: "Please take a look. These are not normal tour routes, the Capitol was closed to tours."

The back-and-forth with Loudermilk has underscored the committee’s difficulty in getting any information from Republicans who were communicating with President Donald Trump, the White House or the rioters during the insurrection or beforehand as Trump strategized about how to overturn his election defeat. While the panel has conducted more than 1,000 interviews, five GOP lawmakers have defied subpoenas, including House GOP Leader Kevin McCarthy, who spoke with Trump that day.

Loudermilk has not been subpoenaed, and there is no evidence that he knew that any of the participants on his tour were outside the Capitol the next day.

The Georgia Republican said in a statement after the video’s release that the panel is "is undermining the Capitol Police and doubling down on their smear campaign." He said there is "nothing there" and noted that none of the locations they visited were breached on Jan. 6.

"As Capitol Police confirmed, nothing about this visit with constituents was suspicious," Loudermilk said. In interview with reporters in the Capitol, he said he condemned the violent language against lawmakers but that "no one in that group showed that kind of aggression that day."

Police reviewed the footage of Loudermilk’s tour as the committee requested his interview and after some Democrats said immediately after the attack that Republicans had led "reconnaissance tours" of the Capitol building beforehand. There has been no evidence that happened.

"This false narrative that the Committee and Democrats continue to push, that Republicans, including myself, led reconnaissance tours is verifiably false," Loudermilk said in his statement.

In a letter sent Monday to Republicans on the House Administration Committee, of which Loudermilk is a member, Capitol Police Chief Tom Manger said there were about 15 people on the tour and that Loudermilk was showing constituents around the Capitol complex, which was closed to visitors at the time because of coronavirus concerns. But they did not enter the Capitol itself. The group also walked around one of the buildings without the congressman, Manger said.

The surveillance video released by the committee shows the group at entrances to tunnels that lead to the Capitol but not entering the building. The Capitol complex includes 20 buildings and facilities, including House and Senate offices, and underground tunnels connect most of the buildings to the Capitol.

"There is no evidence that Representative Loudermilk entered the U.S. Capitol with this group on January 5, 2021," Manger said in the letter. "We train our officers on being alert for people conducting surveillance or reconnaissance, and we do not consider any of the activities we observed as suspicious."

Republicans on the House Administration Committee had previously said they reviewed security footage from Jan. 5 and said there were "no tours, no large groups, no one with MAGA hats on."

But Thompson and Republican Rep. Liz Cheney of Wyoming, the chairman and vice-chairwoman of the Jan. 6 panel, said last month that their review of the evidence "directly contradicts that denial."