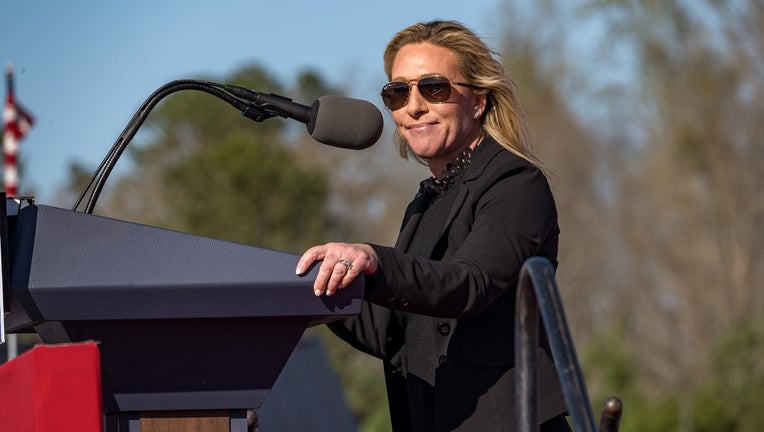 Rep. Marjorie Taylor Greene (R-GA) speaks to supporters of former U.S. President Donald Trump at the Banks County Dragway on March 26, 2022 in Commerce, Georgia. This event is a part of Trump's Save America Tour around the United States. (Photo by Me

ATLANTA - U.S. Rep. Marjorie Taylor Greene is appealing a federal judge’s ruling allowing a challenge to her eligibility to run for reelection to proceed.

A group of voters last month filed the challenge with the secretary of state’s office alleging that Greene helped facilitate the Jan. 6, 2021, attack on the U.S. Capitol that disrupted Congress’ certification of Joe Biden’s presidential election victory. They say that violates a part of the 14th Amendment and makes her ineligible to run for reelection.

Greene says the law that the voters are using to challenge her eligibility is unconstitutional, and she filed a lawsuit asking a federal judge to prohibit state officials from enforcing it. U.S. District Judge Amy Totenberg on Monday ruled that the challenge can proceed. Greene on Tuesday filed an appeal with the 11th U.S. Circuit Court of Appeals.

A rarely cited part of the 14th Amendment says no one can serve in Congress "who, having previously taken an oath, as a member of Congress . . . to support the Constitution of the United States, shall have engaged in insurrection or rebellion against the same." Ratified shortly after the Civil War, it was meant in part to keep representatives who had fought for the Confederacy from returning to Congress.

Free Speech for People, a national election and campaign finance reform group, filed the challenge March 24 on behalf of the group of voters. A hearing before an administrative law judge has been set for April 13.

Greene "vigorously denies that she ‘aided and engaged in insurrection to obstruct the peaceful transfer of presidential power,’" the lawsuit says.

The law only requires the people challenging a candidate’s eligibility to file a written statement of why they believe the candidate isn’t qualified, and that automatically triggers the secretary of state’s request for a hearing before an administrative law judge, the lawsuit says. The fact that a government investigation can be triggered based only on the challenger’s belief violates Greene’s First Amendment right to run for political office, the lawsuit says.

The challenge statute also puts the burden on Greene to prove by a preponderance of the evidence that she didn’t engage in the alleged behavior, and that "burden shifting" violates the due process clause of the 14th Amendment, the lawsuit says.

The lawsuit also alleges that the challenge statute "directly usurps" Congress’ constitutional ability to judge whether a member is qualified.

Finally, a law passed in 1872 removed the disqualifications put in place by the part of the 14th Amendment that the challengers are trying to use against Greene, the lawsuit says.

Voters supported by Free Speech for People filed a similar challenge against U.S. Rep. Madison Cawthorn in North Carolina that has been blocked by a federal judge. The voters are appealing several of the judge’s orders to the 4th U.S. Circuit Court of Appeals.