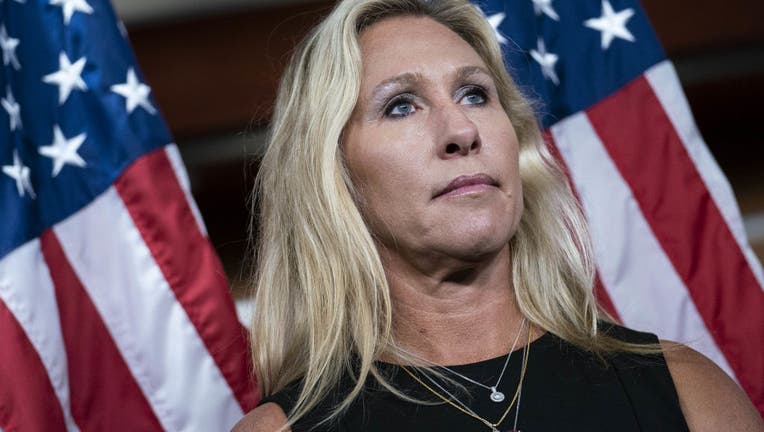 Rep. Marjorie Taylor Greene listens during a news conference to call for the firing of Anthony Fauci. (Photographer: Sarah Silbiger/Bloomberg via Getty Images)

ATLANTA - A federal judge has ruled that a group of Georgia voters can proceed with legal efforts seeking to disqualify U.S Rep Marjorie Taylor Greene from running for reelection to Congress, citing her role in the deadly attack on the U.S. Capitol.

The challenge filed last month with the Georgia secretary of state’s office alleges that Greene, a Republican, helped facilitate the Jan. 6, 2021, riot that disrupted Congress from certifying Joe Biden’s presidential election victory. That violates a rarely cited provision of the 14th Amendment and makes her ineligible to run for reelection, according to the challenge.

The amendment says no one can serve in Congress "who, having previously taken an oath, as a member of Congress . . . to support the Constitution of the United States, shall have engaged in insurrection or rebellion against the same." Ratified shortly after the Civil War, it was meant in part to keep representatives who had fought for the Confederacy from returning to Congress.

Greene, 47, filed a lawsuit earlier this month asking a judge to declare that the law that the voters are using to challenge her eligibility is itself unconstitutional and to prohibit state officials from enforcing it.

Groups in support of the removal of Congresswoman Marjorie Taylor Greene's name from ballots claim she is unqualified to run for office because she facilitated the January 6 riots at the U.S. Capitol. Attorneys for Greene argued the congresswoman did not do anything wrong on January 6.

Totenberg, who was appointed to the U.S. District Court for the Northern District of Georgia by President Barack Obama, wrote that Greene had failed to meet the "burden of persuasion" in her request for injunctive relief.

Free Speech for People, a national election and campaign finance reform group, filed the challenge March 24 on behalf of the group of voters.

Greene said in her lawsuit that she "vigorously denies that she ’aided and engaged in insurrection to obstruct the peaceful transfer of presidential power."