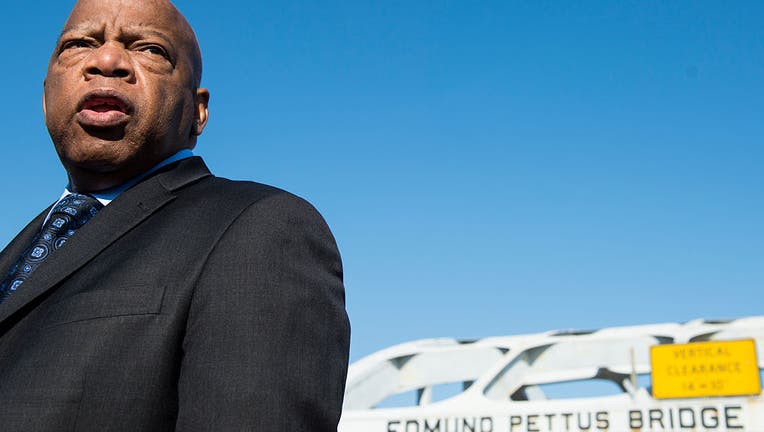 SELMA, Ala. - Over 450,000 people have added their name to an online petition for Alabama's governor to rename the Selma bridge that was the site of "Bloody Sunday" after the late Georgia Congressman John Lewis.

The historic Edmund Pettus Bridge was named after a U.S. senator, Confederate general, and leader of the Alabama chapter of the Ku Klux Klan.

The bridge served as the backdrop of the March 7, 1965 "Bloody Sunday," where voting rights activists, including Lewis and Dr. Martin Luther King Jr., were met with batons and tear gas by members of the National Guard as they attempted to cross.

Archival film footage and photos show a line of roughly two dozen troopers wearing gas masks as they approach the long, peaceful line led by Lewis. A trooper jabbed the butt of a nightstick toward Lewis and officers quickly pushed into the group. Feet became tangled and bodies hit both the grass roadside and the asphalt road. Screams rang out.

Lewis, in sworn court testimony five days later before U.S. District Judge Frank M. Johnson Jr., recalled being knocked to the ground. A state trooper standing upright hit him once in the head with a nightstick; Lewis shielded his head with a hand. The trooper hit Lewis again as he tried to get up. The officer was never publicly identified; Lewis testified he didn’t know who it was, and a gas mask shielded the man’s identity.

That bridge became a touchstone in Lewis’s life. He returned there often during his decades in Congress representing the Atlanta area, bringing lawmakers from both parties to see where “Bloody Sunday” went down.

“It’s far past time to rename the Edmund Pettus Bridge after Rep. John Lewis, a civil rights icon that nearly gave his life on that bridge,” said Michael Starr Hopkins, the organizer of the petition. “Edmund Pettus was a bitter racist, undeserving of the honor bestowed upon him. As we wipe away this country's long stain of bigotry, we must also wipe away the names of men like Edmund Pettus.”

As of Sunday, the petition, which was started in June, has grown to over 450,000 signatures.