One of the five inmates that escaped from a middle Georgia facility on Friday has been captured. A $5,000 reward is being offered for information that leads to the arrest of any of the remaining four.

PULASKI COUNTY, Ga. - Two of the five men wanted after escaping a middle Georgia facility on Friday has been captured, the GBI said late Sunday.

Jackson was taken into custody in Warner Robins on Sunday, the GBI said.

Monday morning, the GBI announced that Evans was also taken into custody in Warner Robins Sunday.

Investigators said inmates ambushed deputies and locked them inside a cell. Those inmates released three others and took off.

All five of the inmates have a violent criminal history with two being murder suspects, the GBI said.

The inmates were supposed to be in lockdown. One of two jailers working was in a cell talking to an inmate when another inmate attacked the guard. The sheriff said the inmates told the jailer they were going to kill her, then took her car keys and attacked the other jailer on duty.

The jailers were not hurt in the attack.

Investigators believe the suspects may be driving a 2015 KIA Sedona with a Georgia license plate: CMP8628. 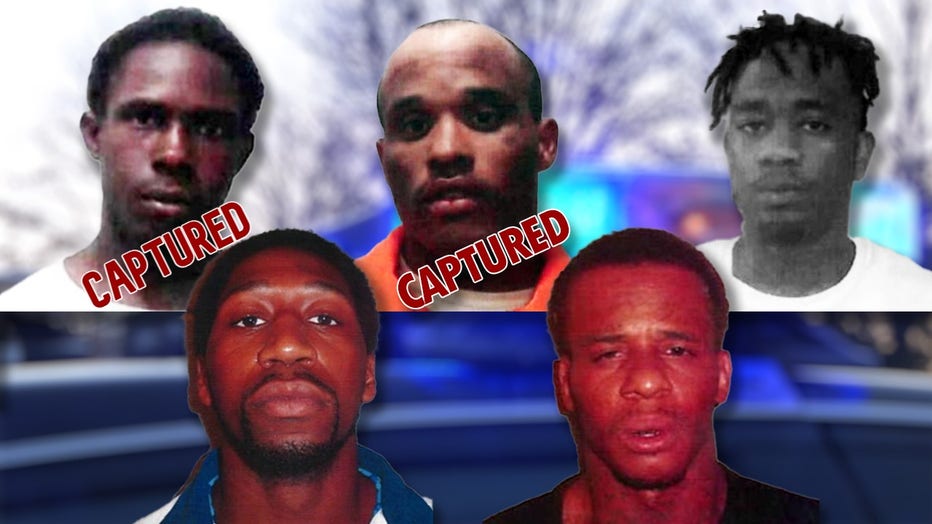 The GBI describes each of the inmates:

Law enforcement across the region are on the lookout for five violent criminals who escaped a middle Georgia facility late Friday night.

Williams was charged with felony murder and home invasion for allegedly shooting a man in July 2020. Penix was accused of killing two men in 2017 in a drug deal gone bad.

The suspects may be armed with two Tasers.

Authorities do not know where the men are headed.

"I’m thinking they’re not in Hawkinsville no more," Brannen said. 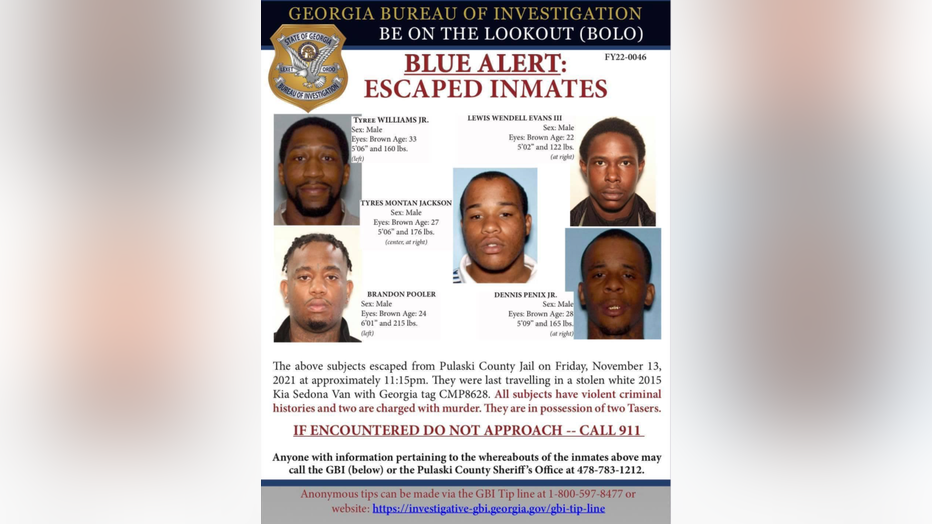 The US Marshals Service is offering a $5,000 reward for information leading to the direct arrest of any of the wanted men.

Authorities said the inmates should be considered extremely dangerous and said people should not take action on their own. Anyone with information on the men’s whereabouts should call 911, the Pulaski County sheriff’s office at 478-783-1212 or Hawkinsville Crimestoppers at 478-783-9255.

This article has been updated to reflect corrected information released by the GBI of the identity of the inmate captured.