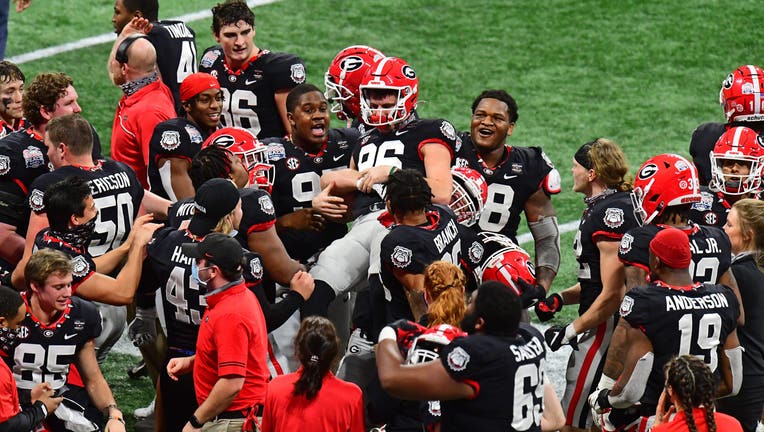 Jack Podlesny #96 of the Georgia Bulldogs is congratulated by teammates after kicking the game-winning 53 yard field goal against the Cincinnati Bearcats during Chick-fil-A Peach Bowl at Mercedes-Benz Stadium on January 01, 2021 in Atlanta, Georgia.

ATLANTA - Jack Podlesny kicked a 53-yard field goal with three seconds remaining, and No. 11 Georgia handed No. 6 Cincinnati its only loss of the season with a dramatic 24-21 victory in the Peach Bowl on Friday.

Georgia trailed 21-10 in the fourth quarter, but its defense clamped down on Desmond Ridder and Cincinnati and JT Daniels helped rally the Bulldogs with his arm. Daniels finished with 392 yards passing.

Podlesny’s third field goal was his longest of the season and gave Georgia a 22-21 lead. Azeez Ojulari sacked Ridder for a safety on the final play. It was Ojulari’s third sack. Georgia tied a school record with eight sacks.

Ridder completed 24 of 37 passes for 206 yards and two touchdowns. Jerome Ford added a career-long 79-yard touchdown run early in the second half but it wasn’t enough for the Bearcats.

Cincinnati (9-1, No. 8 CFP) was motivated to use the Peach Bowl to gain national respect. Coach Luke Fickell wanted the Bearcats to be included in this season’s playoff and he said it was an opportunity to be judged evenly with Power 5 teams in the future.

Ridder threw a 14-yard touchdown pass to Alec Pierce in the first quarter and added an 11-yard scoring pass to Josh Wyle late in the first half.

Daniels, who energized the Bulldogs’ offense when he took over at quarterback for the final three regular-season games, overcame an interception and a lost fumble to lead the comeback.

Georgia’s defense helped fuel the rally. Ridder fumbled on a sack by Ojulari, and Adam Anderson recovered at the Bearcats 25. Zamir White’s 9-yard TD run trimmed Cincinnati’s lead to 21-16, but Daniels’ pass on the 2-point attempt was incomplete. 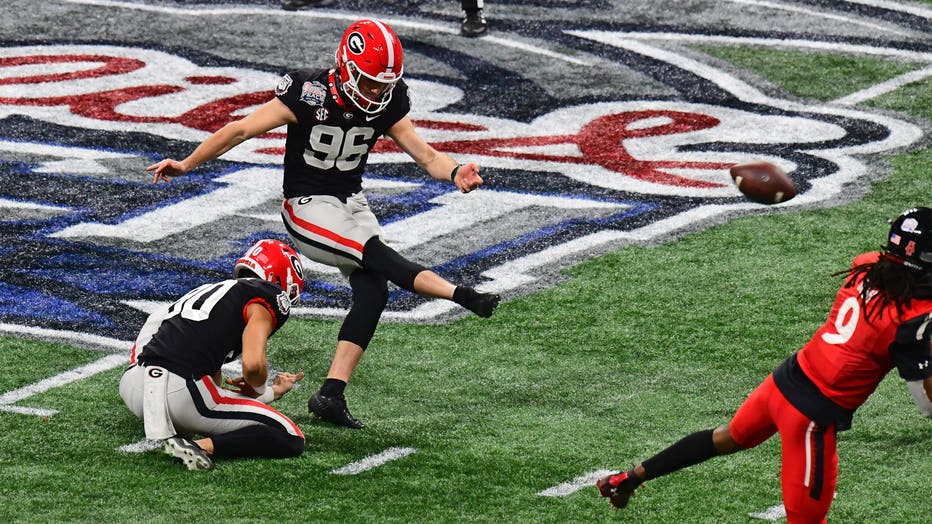 Podlesny kicked a 32-yard field goal with 6:43 remaining. On its next possession, Georgia coach Kirby Smart elected to punt on a fourth-and-3 play from the Georgia 43 with 3:07 remaining.

Ridder ran for one first down before the Bearcats punted with 1:28 remaining, giving Georgia possession at its 20.

Daniels, who threw only one interception while starting Georgia’s last three games, had turnover woes against the Bearcats.

Daniels threw a first-quarter interception and committed a key turnover deep in Cincinnati territory in the third quarter. Daniels, scrambling on a second-down play at the Bearcats 11, fumbled when hit by Jarrell White, who also was credited with a sack. Defensive end Ethan Tuckey recovered for Cincinnati.

After throwing an interception, Daniels regrouped to throw a 16-yard touchdown pass to George Pickens for a 7-7 tie late in the opening quarter.

Cincinnati: Led by Ridder, the Bearcats answered any doubts the Group of Five team could match up against Georgia, from the Southeastern Conference. Ridder frustrated Georgia’s defense with his mobility. Ford used his power to burst through the line and his speed to outrun the Bulldogs’ defense on his 79-yard scoring run early in the second half.

Georgia: White’s TD run in the fourth quarter was a rare highlight for a rushing attack that averaged only 1.9 yards on 24 carries. The Bulldogs played without backup running back James Cook, who was with his family following his father’s death.

Coby Bryant’s interception of Daniels’ pass intended for Pickens in the first quarter extended the Bearcats’ streak of forcing a turnover to 20 consecutive games. It’s the longest active streak among FBS teams. Entering the game, the Bearcats were tied for fifth in the nation with 15 interceptions.

Bearcats left tackle James Hudson was called for targeting and ejected late in the first half. Hudson lowered his helmet on a hit that knocked Georgia cornerback Tyson Campbell to the ground.

Despite the penalty, Ridder kept the drive alive with two more passes, including a go-ahead 11-yard scoring pass to Whyle.

Cincinnati: Ridder, a junior, is expected to announce his plans for 2021, a decision which could shape the Bearcats’ offseason. The Bearcats are scheduled to open their 2021 season on Sept. 4 against Miami of Ohio.

Georgia: The Bulldogs, who are expected to return most of their top skill position players on offense, will open their 2021 season with a high-profile game against Clemson in Charlotte, North Carolina.