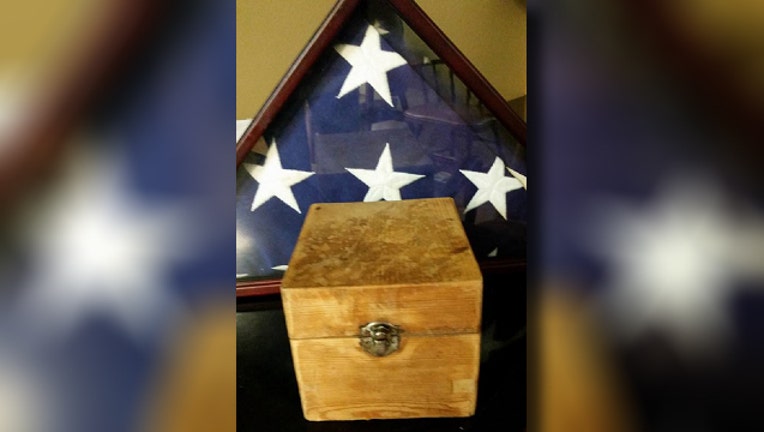 Paul Derek Treaster says his Vietnam-veteran father, whose ashes were discovered beside a south Alabama road, must have been looking down from above, helping to guide him back to the remains.

The ashes had posed a mystery for police in the town of Florala when they were found by a power line crew four weeks ago. But the mystery solved itself Tuesday when Treaster, alerted by news reports, stopped by to claim the small pine box containing his father's ashes, along with a neatly folded, framed American flag found nearby.

Now that he has the remains back, Treaster says he can continue a solemn ritual he began on the banks of Florida's Suwannee River shortly after the death of his father, Paul Douglas Treaster, in 2005.

Florala Police Chief Sonny Bedsole said the ashes had last been left in the family home in nearby Lockhart, Alabama, during a "bad divorce."

"Without being specific, this person had removed all his personal property from the marital home when he left except for a few items, this box with ashes and the presentation flag being left behind temporarily," Bedsole said in an email to The Associated Press.

Treaster told the AP Wednesday in a phone interview that he doesn't want to speculate on how the remains later ended up in a grassy area beside the highway.

He said he doesn't keep up with the news much, and didn't hear about the ashes until his friends told him. Once he saw a photo of the pine box, he immediately recognized it as the one he built to hold the remains and he contacted Florala police.

His father, Paul Douglas Treaster, died Aug. 25, 2005, at age 54. The U.S. Army veteran served during the Vietnam War, according to his obituary from his hometown newspaper, the Crestview News Bulletin in Florida's panhandle.

The elder Treaster died the day that Hurricane Katrina slammed into south Florida. Four days later, it made another landfall, devastating the Gulf coast. "In lieu of flowers, the family asks that donations be made to the Hurricane Katrina victims," his obituary says.

The elder Treaster grew up in Crestview, about 25 miles south of Florala, and lived most of his life there. When Paul Derek Treaster left south Alabama a few weeks ago, he returned to Crestview.

Treaster said he has driven toward Biloxi, Mississippi, where his father spent some of his final days at a Veterans Affairs hospital. At several spots, he looked for boat ramps so he could put a few more ashes in the water.

Every Father's Day — and every Aug. 25 — he plans to continue the tradition of returning his father to the water.