WASHINGTON - The United States passed a notable milestone Friday in its ongoing vaccination effort against COVID-19: More than 100 million American adults have received at least the first dose.

The figure, roughly 101.8 million Americans with their first shot, equates to about 30% of the U.S. population, according to figures from the U.S. Centers for Disease Control and Prevention. Nearly 58 million are fully vaccinated in the country.

Roughly 74% of adults 65 and over have received at least one dose, while 52% of senior citizens are fully vaccinated, officials said Friday.

The U.S. vaccination campaign is in a race against an uptick in virus cases, which have fueled fears of another nationwide surge. The country is averaging 64,000 cases per day this week, up from a daily average of 55,000 infections two weeks ago. Deaths have steadily been averaging about 900 a day. 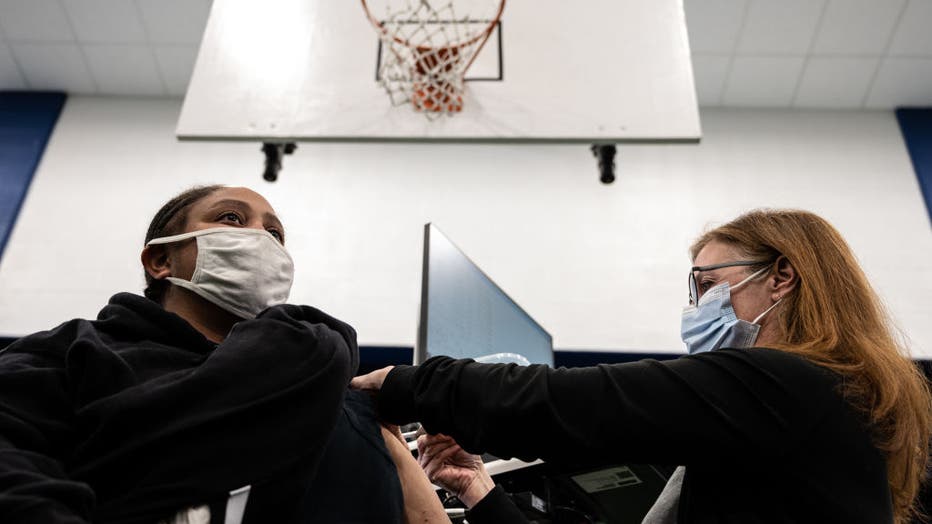 FILE - A woman receives her COVID-19 vaccine from a nurse under a basketball goal in the gymnasium at Whitney M. Young Elementary School on April 2, 2021 in Louisville, Kentucky. (Photo by Jon Cherry/Getty Images)

Vaccinations began in December under former President Donald Trump, but got off to a slow start. When President Joe Biden took office in late January, he pledged to administer 100 million doses to Americans within his first 100 days in office — a figure that included people also receiving their second dose. That goal was hit in March, 58 days ahead of schedule.

With the emergency approval of three COVID-19 vaccines and increased supply, the administration has said it is on track to have enough vaccines for all U.S. adults by the end of May. It also launched a "We Can Do This" campaign to encourage those who are hesitant to get the vaccine against the virus, which has claimed over 550,000 American lives.

The race is on to vaccinate as many people as possible, but a significant number of Americans are so far reluctant to get the shots, even in places where they are plentiful.

Roughly 25% of Americans say they probably or definitely will not get vaccinated, according to a new poll from The Associated Press-NORC Center for Public Affairs Research. Most are leery about possible side effects, despite the vaccine being cleared for us by the U.S. Food and Drug Administration. They tend to be Republican, and they are usually younger and less susceptible to becoming critically ill or dying if they catch COVID-19.

But there has been a slight shift since the first weeks of the nation's largest-ever vaccination campaign. An AP-NORC poll conducted in late January showed that 67% of adult Americans were willing to get vaccinated or had already received at least one shot. Now that figure has climbed to 75%.

That estimate moves the nation closer to herd immunity, which occurs when enough people have immunity, either from vaccination or past infection, to stop uncontrolled spread of a disease.

Anywhere from 75% to 85% of the total population — including children, who are not currently getting the shots — should be vaccinated to reach herd immunity, infectious disease experts say.

The Associated Press contributed to this report. It was reported from Cincinnati.