It has been a year since Ahmaud Arbery was gunned down while jogging on a south Georgia street.

ATLANTA - A year has passed since Ahmaud Arbery was gunned down while jogging through a south Georgia neighborhood outside the port city of Brunswick. It took nearly two months after the Feb. 23, 2020 slaying for the story of the 25-year-old Black man’s death to gain much attention. His story has since opened a broader conversation of equality in the country.

Tuesday was a day of remembrances and memorials across Georgia from the Satilla Shores subdivision where he fell bleeding in the street from three close-range shotgun blasts to his final resting spot in Waynesboro to the state Capitol and a run in Atlanta in his honor.

Arbery’s family attended a memorial procession Tuesday evening down Holmes Drive, the same road where the young man was met by three men. A video shows Arbery out for a Sunday afternoon jog when he was stopped by two men in a pickup truck. Moments later, one of those men would end up shooting Arbery.

Many gathered in the Brunswick neighborhood a year after Ahmaud Arbery was gunned down to finish the run he never did.

A little more than two months later, the Georgia Bureau of Investigation arrested Gregory McMichael and Travis McMichael, father and son, in connection to the deadly shooting. Both are charged with murder and aggravated assault. Law enforcement would also arrest neighbor Roddie Bryan, who filmed it.

In Waynesboro, more family, friends, and members of the community gathered for a candlelight vigil where Arbery was buried. It was his mother’s hometown. Wanda Cooper Jones never thought she would have to bury her own son. She knows the $1 million lawsuit she filed on Tuesday in U.S. District Court against men charged in his death won’t bring him back, but it might bring him some justice.

"It is important to remind people of the origins, when it all started," said Jason Vaughn, Arbery’s high school football coach and an organizer of the Brunswick event. "For a long time, it was like we were yelling into the dark, and nobody was listening." 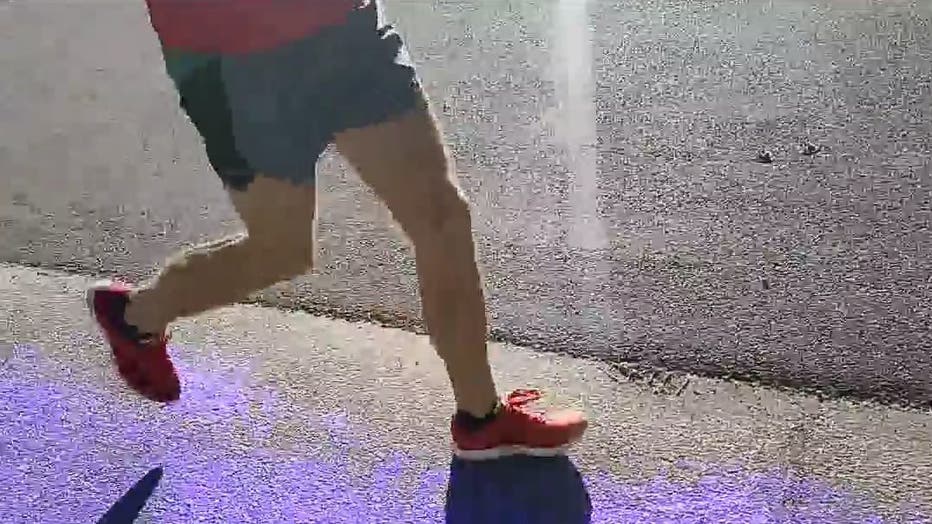 Runners were encouraged to "Run with Maud" on Feb. 23, 2021, the one-year anniversary of the shooting death of Ahmaud Arbery. (FOX 5)

Members of the Atlanta Track Club met early Tuesday morning to run 2.23 miles, as they did on what would have been Arbery’s 26th birthday. Family members said the young man was very athletic, loved sports, and loved to run. While the "Run with Maud" event was officially held starting at the track club’s headquarters, organizers encouraged others to run where they could for him.

"There were a lot of moments of silence also where we could think about why we were out there. And how lucky we were and fortunate to be out there and to be safe and not have to fear for our safety," said Atlanta Track Club Director of Marketing Jay Holder. "It was more powerful than your average run because we really remember the reason we were there."

The anniversary march and memorial run have been organized by the 2:23 Foundation, a group founded by Vaughn and Arbery’s cousin, Demetris Frazier, to fight systemic racism.

The foundation worked last fall to register 18-year-old high school students to vote. Now its members and other local activists are lobbying for the creation of a citizen review panel for the Glynn County Police Department, which initially responded to Arbery’s slaying. 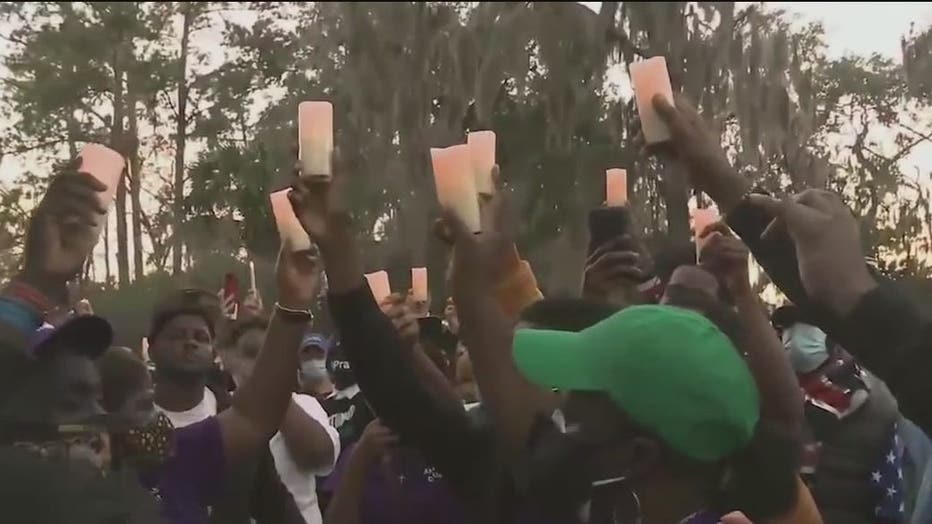 A candlelight vigil being held on Feb. 23, 2021 in Brunswick for Ahmaud Arbery on the one-year anniversary of his shooting death. (FOX 5)

Vaughn, who coached Arbery at Brunswick High School, said planning for the anniversary has been taxing. For him, Arbery’s slaying remains painfully fresh.

"You want to make sure you keep Ahmaud’s name alive, but it’s like reading an obituary over and over again," Vaughn said. "It’s like reliving the past all over again. You’ve got to stay strong."

Immediately after the shooting, police interviewed the men who chased Arbery down, and let them walk free. The first prosecutor assigned to the case saw no reason to bring charges. Pleas for justice by Arbery’s family went largely unheard as Georgia and the nation entered lockdown in the coronavirus pandemic.

Arbery had been dead for more than two months when a cellphone video of the shooting was leaked online May 5 and a national outcry erupted. The Georgia Bureau of Investigation took over the case the next day and swiftly arrested the shooter, Travis McMichael; his father, Greg McMichael; and neighbor Roddie Bryan on murder charges.

Outrage over Arbery’s slaying still simmered when a Minneapolis police officer killed George Floyd on May 25, igniting protests across the U.S. denouncing racial injustice.In Brunswick, the death of Arbery served as a wake-up call to many residents, both Black and white, that they need to be more active in holding elected officials accountable, said the Rev. John Perry. He served as president of the Brunswick NAACP chapter at the time of the killing. Now he’s running to be the city’s next mayor.

"Previously, we elected people into office and just trusted that they would do the right thing," Perry said. "The failure to carry out justice in the Ahmaud situation said we needed to do more as citizens."

In November, voters angered by Arbery’s death ousted District Attorney Jackie Johnson. Greg McMichael had worked as an investigator for Johnson, who many blamed for playing a role in the delayed arrests, an accusation she denies.

Meanwhile, Republican Gov. Brian Kemp is asking Georgia lawmakers to all but eliminate an 1863 state law authorizing private citizens to make arrests. The prosecutor first assigned to the Arbery case cited that law in concluding the killing was justified.

"A year ago today, Ahmaud Arbery lost his life in an evil act of vigilantism that has no place in Georgia. We continue to mourn with his mother, loved ones, and community, and will work to honor his memory in the days to come."

The McMichaels’ lawyers have said they pursued Arbery suspecting he was a burglar after security cameras had previously recorded him entering a home under construction. They say Travis McMichael shot Arbery while fearing for his life as they grappled over a shotgun. It was Bryan, the third defendant, who took the cellphone video of the shooting from the driver’s seat of his pickup truck.

Prosecutors have said Arbery stole nothing and was merely out jogging when the McMichaels and Bryan chased him. They remain jailed without bond.