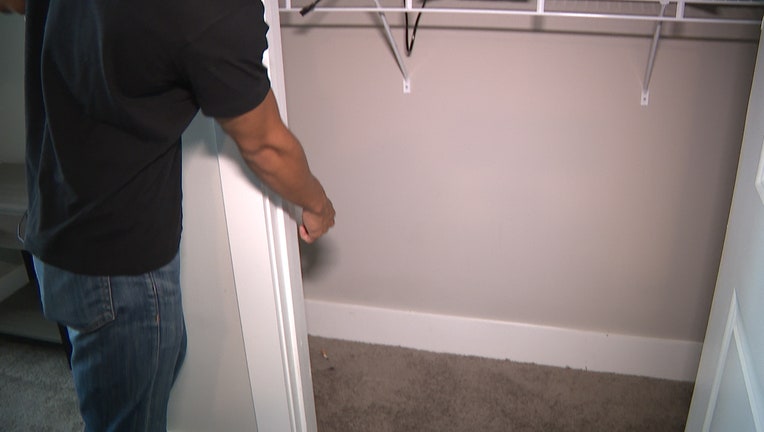 ATLANTA - A man claims a woman hid in his closet without him knowing for 12 hours, before taking off with expensive jewelry and other items.

The man who wants to stay anonymous said he invited a woman to his Midtown apartment Sunday evening.

He said she was insistent he go to the bathroom.

When he came out, he said she had his watch in her hand.

"I heard her go through my stuff. Immediately went out and caught her put my watch in an obscure location. I confronted her about it, why did you try to steal it and move it away from where it was?" he said.

In the meantime, the man and his neighbor kept an eye on the woman in the hallway.

"She was going on a tirade, yelling, being obnoxious. So when Atlanta police arrive three hours later, she starts running around the apartment building," the neighbor said.

Police were not able to find her.

However, he later learned through security footage, the woman had gone back into his apartment while they were searching for her.

She allegedly hid in a closet in an unused room.

He said he left his apartment Monday evening. In the security footage, you can see a woman walk out of the apartment just several minutes after he leaves.

He said she had been in the closet for 12 hours.

The man said when he returned a few hours later, he found his door was unlocked.

He also found cigarettes, hair, and a lighter in the closet.

"It's terrifying. Anything could have happened at that time. I don't know what she was doing. I was talking to my friends about what had happened. She was hearing everything, I don't know if she was watching. She was there, just waiting for the perfect time. How creepy. It's just insane," he said.

She allegedly took off with more than $16,000 in items. Police told the man he is the fifth known victim.

He also said she is known to hang out at Tongue and Groove and Johnny's hideaway.

The man said he hopes he can help others from becoming victims.

The two were able to get a video showing the woman's face.

FOX 5 has reached out to the police about the video to confirm she is the woman connected to all five of the incidents.