GWINNETT COUNTY, Ga. - A Gwinnett County family was startled awake by a loud boom outside their front door. Now, they are left wondering is someone is targetting them.

Home surveillance video shows a man dressed all in black standing in a driveway on Bay Pointe Way in unincorporated Lilburn. He appears to be lighting and then throwing something toward a house. The man is seen sprinting down the driveway and jumping in an SUV as a loud explosion can be heard.

Catherine Causey said it was just after 7 a.m. Monday morning. She said it woke her dad out of a sound sleep and startled the neighbors.

Chris Button lives two houses away. He heard the noise and immediately went to check on his friends.

"I looked up and there's a huge plume of smoke coming from my neighbors' house," said Button.

Firetrucks raced to the home.

"They came out with all the tools as if it were a bomb or something, just to make sure everything is safe," said Causey.

Causey said she thinks it may have been an M80 firework or something similar. Investigators have not yet been able to determine exactly what it was.

She said it's terrifying. Other home video systems captured the vehicle circling the cul-de-sac at 7:06 a.m., three minutes later the car is back, with the tag covered, and the man dressed in black is in her driveway. 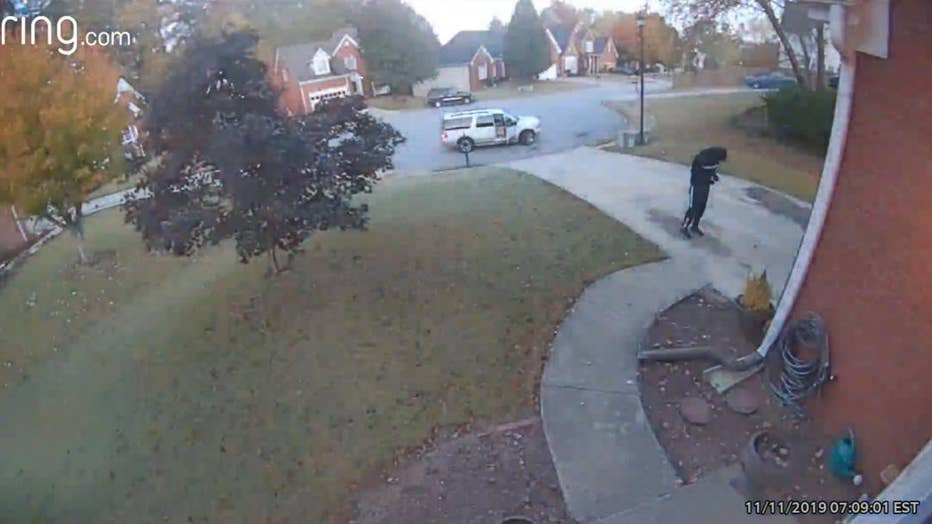 She said she has no idea who would do this or what else they might be capable of.

"If they really are targeting us, what else will they do if they know it didn't catch us this time?" said Causey.

The family has been checking with other neighbors who have home surveillance cameras to get a tag number and any other details about the vehicle or the people who were inside it.