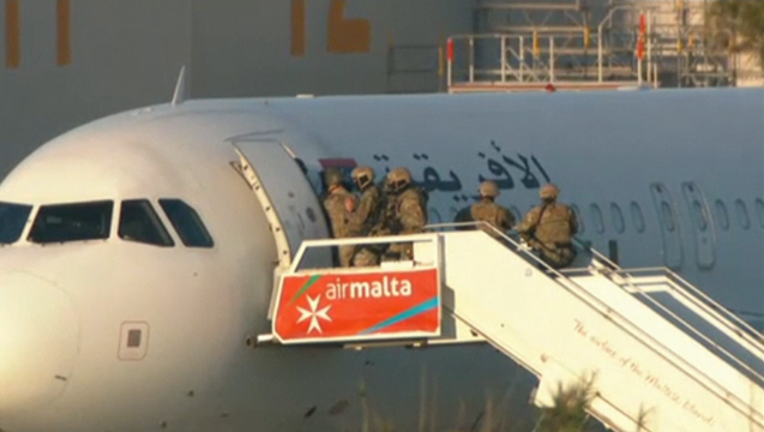 VALLETTA, Malta (AP) ��� Two Libyan hijackers diverted a domestic flight to the Mediterranean island of Malta on Friday to demand asylum in Europe and create a new political party in honor of the late dictator Moammar Gadhafi, officials said. After hours of negotiations, the standoff ended peacefully with the hijackers freeing all 117 people on board and walking off the plane to surrender.

The hijacked Airbus A320 flight, operated by Afriqiyah Airways, was traveling from the Libyan oasis city of Sabha to the coastal city of Tripoli when it was diverted to Malta and landed at 11:34 a.m. local time.

Malta state television TVM said the two hijackers had hand grenades and had threatened to explode them. All flights to Malta International Airport were immediately diverted and emergency teams including negotiators were sent to the airport tarmac.

Afriqiyah Airways said when the plane reached a cruising altitude of 36,000 feet (10,980 meters), pilot Ali Milad was told the hijackers were armed and wanted to land in Rome. Milad suggested landing in Tripoli, the hijackers refused, and a decision was made to land in Malta due to fuel limitations.

Maltese Prime Minister Joseph Muscat told reporters the hijackers wanted negotiators to board the plane after it landed but his government refused and insisted that all passengers and crew be released.

The hijackers then allowed the plane's doors to open at 1:44 p.m. and a staircase was brought over so freed passengers could disembark in groups.

In a series of tweets, Muscat said 65 people were allowed to leave, then another 44 were freed, including some crew, all coming out without hand luggage. Finally the two hijackers walked off the plane with the final crew members, including the pilot and co-pilot.

Muscat announced that the hijacking was over in a tweet at 3:44 p.m., saying the two hijackers surrendered unconditionally. They were searched, taken into custody and being questioned, he said.

The airline said 117 people, including six crew members, had been on board the hijacked plane. Twenty-five of the passengers were artists, writers and intellectuals from southern Libya heading to a cultural forum in Tripoli.

Muscat said the two hijackers had one hand grenade and one pistol on them and a second pistol was found on the plane when it was searched by Maltese soldiers.

In a later statement, the government said initial forensic investigations showed that the weapons used by the hijackers were identical "replica" weapons ��� imitation weapons that may not actually fire but are difficult to distinguish visually from real guns.

Police said it was most likely the two hijackers would be arraigned Saturday.

Late Friday, security experts were still checking to make sure the aircraft was free of explosives or other arms and Maltese authorities were still questioning the passengers and doing security checks on them to make sure another hijacker was not among them.

Passenger Ibrahim Bashir told Al-Nabaa TV the passengers were "trapped" inside buses at the Malta airport and not allowed to leave. The airline said a chartered plane was being sent to Malta to bring the passengers back to Libya after the questioning.

Milad, the pilot, identified the two hijackers as Moussa Shaha and Ahmed Ali, who other Libyan officials said were in their twenties.

The pilot said the men were seeking political asylum in Europe and wanted to set up a political party called "the New Fateh." Fateh is a reference to Gadhafi, who led the Fateh revolution after his coup in 1969.

After many hostages left the plane Friday afternoon, one hijacker waved Libya's old green flag from the plane's doorway.

"Security breaches happen everywhere and Libya is not an exception," Milad Matouq said. "Despite the security situation (in the country), things are excellent. This is the first incident since the (2011) revolution."

But a Libyan lawmaker disputed the minister's comments, saying he was not surprised that a plane from Sabha was hijacked because security measures were "messy" at the nearby Tamanhent airport.

The Sabha airport was closed after tribal clashes two years ago and its air base was turned into a civilian airport for internal Libyan flights. A small militia from the city of Misrata in northwestern Libya has been guarding it since 2014.

Salah Qalma, a lawmaker from Sabha, said while the airport has an electronic gate at its arrival hall there are no electronic gates or guards at its adjacent exit gates.

"It's very easy for anyone to enter without passing through the electronic gates," he said.

Qalma also said the airport building has no fence or guards outside it and planes on the tarmac are not separated from the parking lot.

Malta International Airport said it hoped to clear up the backlog of delayed and diverted flights by late Friday. It said 44 flights were affected.

Libya, a sprawling oil-rich North African country, has been split between rival parliaments and governments, each backed by a loose array of militias and tribes, since Gadhafi was ousted and killed in 2011.

Western nations view the newly-formed U.N.-brokered government as the best hope for uniting the country, but Libya's parliament, which meets in the country's far east, has refused to accept it. Amid chaos, the Islamic State and al-Qaida affiliates have gained a foothold over the past years.

This version corrects the spelling to Tamanhent airport.