ROME - The drought-stricken island nation of Madagascar is a ’wake up call" to what the world can expect in coming years due to climate change, the head of the United Nations' food aid agency said Tuesday.

David Beasley, executive director of the World Food Program, told The Associated Press in an interview that what’s happening in the south of the Indian Ocean country is "the beginning of what we can expect" to see as the effects of global warming become more pronounced.

"Madagascar was heartbreaking," Beasley said, referring to his recent visit there. "It’s just desperate," with people reduced to selling their household pots and pans to try to buy food, he said.

That's the year many industrialized nations — but not China, Russia or India — have set as their target for achieving carbon neutrality, meaning reducing greenhouse gas emissions to the point where they can be absorbed and effectively add zero to the atmosphere. 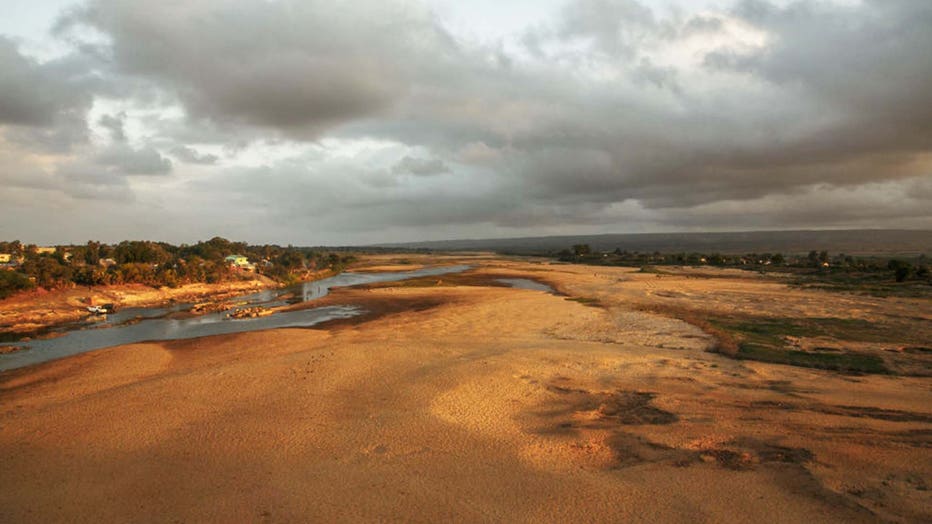 FILE - A view of the Mandrare river which is often dry during the austral winter.

When Beasley, a former South Carolina governor, took the World Food Program helm in 2017, the top reason for people being on the brink of starvation was man-made conflict, followed by climate change, he said.

But since then, climate change has been eclipsing conflicts as the bigger driver in displacing people and leaving them not knowing where their next meal will come from. Last year, about 38 million, he said, were displaced "strictly because of climate shocks, climate change," Beasley said.

"I would like to think this is the worst-case scenario — 216 million people by 2050 that will be migrating or displaced because of climate change," he said.

According to updated WFP figures released Tuesday, close to 30,000 people on Madagascar will be one step away from famine by the end of the year, and some 1.1 million already suffer from severe hunger. The island is struggling with exceptionally warm temperatures, drought and sandstorms.

Crops have wilted, and harvests are scarce. People have taken to eating cactus leaves, which usually are cattle fodder, the U.N. food agency said.

"Madagascar is not an isolated incident,'' Beasley said. "The world needs to look to Madagascar to see what is coming your way and (to) many other countries around the world."

He pointed out that Madagascar, a country of 27 million people, accounts for only the tiniest fraction of greenhouse gas emissions in global terms.

"What did they do to contribute to climate change?'' he asked rhetorically.

The World Food Program has been supplying some 700,000 people on the island with food and supplemental nutritional products for pregnant and nursing women and children.

In Ethiopia, by contrast, famine is man-made, caused by conflict.

The World Food Program estimates that 5.2 million people are in need of emergency food assistance in Tigray, Ethiopia's embattled northern region. United Nations officials have warned in recent weeks that more than 400,000 people could face starvation and death if humanitarian aid isn't delivered quickly, but hardly any aid can get to those who desperately need to eat.

The Tigray forces say they are pressuring Ethiopia’s government to lift a months-long blockade on their region of around 6 million people, where basic services have been cut off and humanitarian food and medical aid denied.

Beasley says the WFP has been "messaging to all sides, including the Ethiopian government, the leadership, that this is a crisis"' needing immediate access for food aid. But "we're not making headway," he said.

"We're not able to get (food aid) trucks in or get fuel in. We're not even able to get the cash to the people we need to pay," Beasley told the AP.

As a result, Tigray's people "have to be dying at unprecedented numbers, but we can't get the access we need," he said. "It's a disgrace."

He said the WFP should be moving in 30 trucks a day loaded with food, and another 70 full of medicine and other humanitarian assistance. "We're not even getting 10% of that in trucks a day," the agency director said.

For many of Tigray's people, Beasley said, it has come down to "either die or migrate."

"You run into the issue of donors (who) do not want to be seen in any way as aiding or abetting or supporting the Taliban,'' Beasley said.

In Afghanistan, 22.8 million people — half of the population — face acute food insecurity, or are "marching toward starvation," as Beasley put it.

The dire situation will grow even more critical starting in January, when the WFP’s food stocks for Afghanistan will run low, if more donors don’t come through.

"That price tag is $230 million a month feeding them" at only partial rations, Beasley said, adding: that "there are 8.7 million people in Afghanistan knocking of famine’s door,."